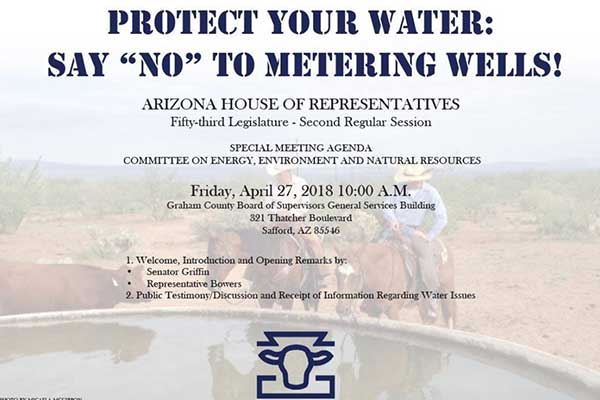 Safford – State Senator, Gail Griffin will be in town Friday for an informational meeting regarding water issues. The meeting will be held at the Graham County Board of Supervisors General Services Building on Friday, April 27, 2018 at 10:00 a.m.

At issue is the metering of wells. Senator Griffin told Gila Valley Central that there is a proposal floating around the legislature to meter private wells. Griffin says that the proposals were submitted without any consideration of rural areas of the state. So far meetings have been held in Yuma and Casa Grande and have filled to capacity.

In the summer of 2017, Governor Doug Ducey convened a hand-picked group of individuals known as “The Water Plenary Committee.” The committee was tasked with addressing some local water issues and creating the next big policy move for Arizona water. ACGA had a seat at the table until the group slowly began to shrink in size. An official report or study was never published by the Plenary Water Committee.

From the first day that it participated in the Water Plenary Committee, ACGA made it clear that it opposed rural well metering and even had one-on-one meetings with the governor’s chief of staff to explain ACGA’s concerns about water metering and concerns about regulating water uses before the water uses were recognized by a water right. ACGA’s policy position appeared to alienate ACGA from future water meetings with the Water Plenary Committee. This prejudice also seemed to extend to others who disagreed with the governor’s policy positions. During the Water Plenary Committee process, for instance, key stakeholders and sitting legislators were never invited to the table. In fact, even when they asked to attend the committee meetings, they were denied participation.

Phoenix has officially become the fifth largest city in the United States. The U.S. Census Bureau reports that Phoenix is also the fastest-growing city in the country. The growth and resilience of Phoenix and other desert cities in the valley and arid areas in the state is the product of public investments in critical infrastructure projects and visionary leadership. Water management goals for the metropolitan areas have been focused on stable supplies that extend for many years into the future.

The Committee on Energy, Environment and Natural Resources led by Chairman Rusty Bowers and the Committee on Natural Resources led by Chairwoman Gail Griffin have been meeting since the beginning of session to discuss the issues brought forward in the Plenary Committee along with other outstanding water issues. The Committee has easily logged over 100 hours of hearings and is now holding listening session out in the country for input from citizens on the various issues and what should be done.

Griffin says that it is critical that members in the area attend the hearing on Friday to speak directly with legislators about their concerns and express their opinions on the water issues.