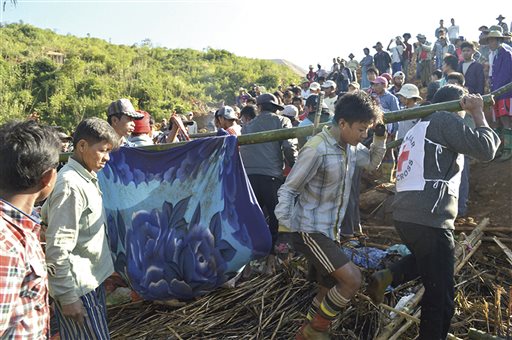 In this photo taken Saturday, Nov. 21, 2015, and released by Eleven Media Group, Myanmar Red Cross workers and people carry victims at a landslide affected area at Phakant jade mine, Kachin State, Myanmar. The landslide near the jade mine in northern Myanmar killed a number of people and left many missing. (Eleven Media Group via AP) MANDATORY CREDIT

YANGON, Myanmar (AP) — Soldiers, police and volunteers pulled body after body from the rubble in northern Myanmar on Monday, as the death toll from a landslide near several jade mines reached at least 113, a local official said, with more than 100 others missing.

The collapse early Saturday in Kachin state’s mining community of Hpakant was the worst-such disaster in recent memory.

The corpses were taken to a nearby morgue, where friends and relatives broke down as they identified the victims. Some were buried at a local cemetery and others were cremated. But there were stacks of unidentified bodies wrapped in blue plastic tarps.

Kachin is home to some of the world’s highest-quality jade, and the industry generated an estimated $31 billion last year, with most of the wealth going to individuals and companies tied to Myanmar’s former military rulers, according to Global Witness, a group that investigates misuse of resource revenues.

The accident occurred at a 60-meter (200-foot) -high mountain of earth and waste discarded by several mines.

Earlier, officials said the dead were mostly men who were picking through the waste and tailings in search of pieces of jade to sell. But officials said Monday the accident occurred at about 3 a.m., burying more than 70 makeshift huts where the miners slept.

Nilar Myint, a local township administrator, said that by Monday the death toll had reached 113, with more than 100 others missing.

Bodies continued to be pulled from the debris on Monday.

“It’s not ending. It’s still on going. Local people in town are getting angry, because there are just too many bodies,” she said.

After Myanmar’s former military rulers handed over power to a nominally civilian government five years ago, resulting in the lifting of many Western sanctions, the already rapid pace of mining turned frenetic. No scrap of ground, no part of daily life in Hpakant has been left untouched by the fleets of giant yellow trucks and backhoes that have sliced apart mountains and denuded once-plush landscape.

In the last year, dozens of small-scale miners have been maimed or killed picking through tailing dumps.

“Large companies, many of them owned by families of former generals, army companies, cronies and drug lords, are making tens or hundreds of millions of dollars a year through their plunder of Hpakant,” said Mike Davis of Global Witness.

“Their legacy to local people is a dystopian wasteland in which scores of people at a time are buried alive in landslides,” he said.