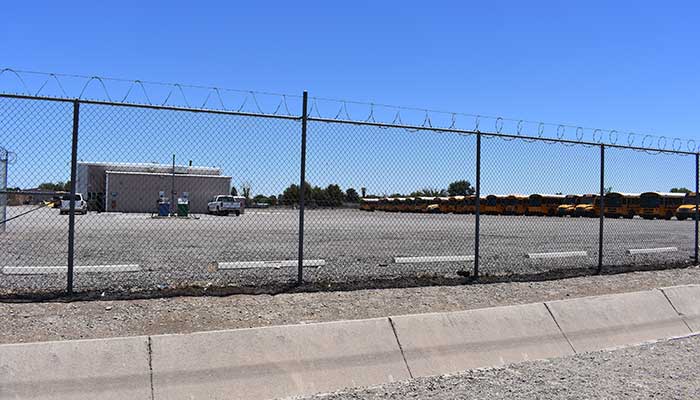 SAFFORD – Police were dispatched early Wednesday morning to the Safford Unified School bus barn in reference to a reported vandalism that had taken place in the early morning hours.

When the officer arrived and spoke with the supervisor for the bus barn, he was informed that, according to the surveillance system, someone had damaged the property at about 3:15 that morning. The supervisor proceeded to show the officer the tool shed that had been broken into where tools and a hacksaw had been scattered about and a weed eater had been thrown underneath a school van. One of the work trucks had red spray paint on the drivers side bed that had been damaged two nights prior.

The officer was then shown the padlock on the gate leading into Lafe Nelson School where authorities could see metal shavings around the lock and that it had been cut. Next, the officer went to the area where the buses are located and was informed that during the summer the air to the bus doors are let out, which causes the doors to open easily. There were three buses that had been accessed and fire extinguishers sprayed throughout. One of the bus’ emergency doors had the top and bottom windows broken. The officer was then shown another work truck where the back window was broken out and the inside had been sprayed with a fire extinguisher. At the gas pumps,  the diesel nozzle had been taken off and put on the ground.

When authorities and the bus barn supervisor reviewed the video footage around the gas pumps, a quick glimpse of a person wearing a hooded sweatshirt and pants was seen. More video footage will be reviewed as part of the investigation.

Authorities were dispatched again to the Safford School bus barn around 9:30 that night in reference to two male juveniles trespassing the school bus barn. An officer approaching the area could see the subjects running as he got closer to their location and when he arrived where they had been standing, the officer saw the bus barn’s gate was open. Authorities set up a perimeter around the bus barn yard to search the area and vehicles located within. Police were informed of who the suspects could be and when police checked the address, and located the two boys, they admitted to being in the bus barn yard but stated they found the gate open and they were just looking around and did not damage anything. A group of people out scorpion hunting told police that one of the boys had been spending the night at the other boy’s house out south of town the night before. The boys were asked if they had come into town and had anything to do with the damage that had been done the night prior but they stated they had not.

The events are still under investigation.