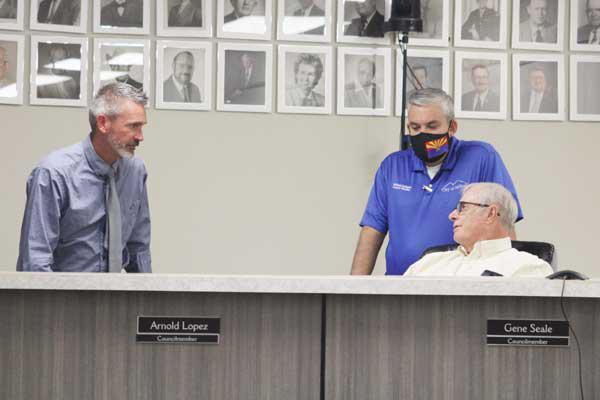 SAFFORD —With Graham County having experienced a 100 percent increase in the number of positive COVID-19 cases over the past 10 days, the Safford City Council is being asked to approve a declaration strongly encouraging — but not mandating — use of face coverings in public.

“I don’t want to be that mayor that says, ‘Mask up,’ if the Town of Thatcher doesn’t mask, if the Town of Pima doesn’t mask or the Graham County says, ‘Not mask.’ I want to be as united, because, you know, we have worked so hard to stay as a tight little group,” said Safford Mayor Jason Kouts.

The council will take up the proclamation at the July 13 meeting, which starts at 6 p.m. in the Safford Library program room.

Graham County reported two new positive cases Thursday, bringing the county’s total to 184. Forty-three have recovered, 138 are active and there have been three deaths. There are also more than 100 tests awaiting results.

Greenlee County, which has a mandated mask order in place, reported three new cases Thursday, bringing Greenlee County’s total to 30. Twelve have recovered, 17 are active and there has been one death.

The San Carlos Apache Tribe added five new cases Thursday, increasing the total to 204 tribal members who have tested positive — 181 on the reservation and 23 off. Seventy-eight are active, 121 have recovered and there have been five deaths.