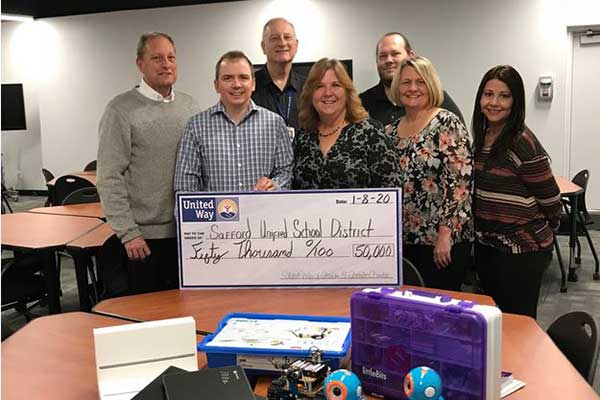 The Technology and Training Center (TTC) of Safford Unified School District opened its after school technology program thanks in part to a generous grant from United Way.  The $50,000 was awarded by United Way in December to fund STEM learning supplies including DASH, a STEM learning robot, Little Bits electronic building blocks, Lego WeDO STEM kit and more!  The TTC opened in December by hosting its first after school activity, Hour of Code™, over three days involving fifty K-8 students who learned coding using block based programming activities.  The next Making IT REAL event is scheduled for January 28, 29 and 30 where SUSD K-6 students will meet DASH and begin to explore coding through robotics. Registration is open to SUSD K-6 students at bit.ly/MeetDash. Space is limited to ensure a quality experience.

The after school program, Making IT REAL (Realistic Engineering Applications in Life), has been a vision of Safford’s Director of Technology, Susan Lindsey, for almost a decade.  She, along with Carol Elders, Safford’s Technology Curriculum Specialist, have been writing grants to fund a program where students work directly with IT professionals learning technologies like 3D printing, coding, robotics, etc.

“We received our first grant for a 3D printer in 2012 and began sending technicians into classrooms trying to excite students about some of the STEM-related topics they were learning as well as open their minds to technology as a career field,” said Lindsey.

Finding time in classrooms always proved challenging, so Lindsey and Elders began finding funding to help create a place to actually house an after school program.

In 2016, Lindsey and Elders wrote and received a $75,000 Community Investment grant from Freeport MacMoRan to create a technology-ready meeting room available to non-profit organization using one of the SUSD buildings.  This space would also house the Making IT REAL after school program. The flood of 2016 delayed the district’s building remodel for two years until Superintendent Ken VanWinkle found a new place for the TTC, the old fieldhouse between Ruth Powell and Lafe Nelson Schools.  In 2018, the remodel began under the direction of Phillip Nelson, Maintenance and Transportation Supervisor and the project was finished in July 2019 opening the doors for a decade-long dream to become a reality.

“We designed the TTC to house the technology department on one side and the training center on the other side with windows between the areas to allow students to actually see how IT technicians work.  This physical closeness means our technology team members are the facilitators in the Making IT REAL events working directly with students,” Lindsey said.

According to Lindsey, the entire cost of remodeling the building to create the TTC and house the Making IT REAL program was funded by grants and outside sources without having to use district funds.

VanWinkle said, “This entire project, from discussion to completion took a lot of time. Delays due the ‘Flood of 2016’ and other issues actually allowed us to look at other locations and options regarding where to put the TTC and how to bring this idea to fruition. I greatly appreciate Susan Lindsey for her out-of-the-box thinking, creativity, and persistence – this dream has become a reality. Our IT Staff are second to none! I also thank Phillip Nelson and his maintenance staff for enduring the ideas and changes. We are thankful to the United Way for their support and generosity – not only do we have the facility, we now have the equipment and materials to help make a difference in the lives of our students!”

The TTC facility can host groups of up to 50 people at tables and is accessible for use seven days a week to non-profit community organizations.  The facility is handicapped accessible with a paved parking lot, has a Promethean interactive display for presentations as well as other technologies, and offers a kitchen serving area with an ice machine.  Information regarding using the TTC can be directed to 928-348-7019 option 2 or tech_help@saffordusd.com.