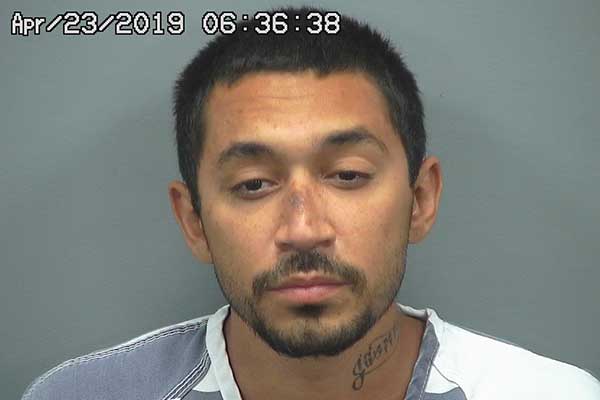 Thanks to coordinated police work by several Safford police officers the alleged thief of a Sony Playstation and two games was captured and the stolen items returned to the owner.

On Saturday, April 20, 2019 a police officer was dispatched to a home in Safford in reference to a stolen Playstation. The officer arrived at the duplex, knocked on the door and announced himself but there was no response. The officer walked around the apartment and confirmed that nobody was home, then left the residence to attend to other calls.

Later that evening that same officer conducted a traffic stop on a suspicious vehicle that he had observed visiting a known drug residence on Relation Street. The vehicle was being driven by the woman who had called to report the theft of the Playstation and games. The woman’s boyfriend was in the front seat and another passenger who was riding in the back seat was reportedly armed with a Glock 22 .40 caliber handgun. The three individuals told the officer that they were going to a residence to confront them about the theft and see if Eddie Trevizo – the man they suspected of theft – was there.

The woman said that she didn’t see any signs of forced entry through the doors and said that it appeared that the burglar came through one of the windows. The woman’s next door neighbor had apparently seen Trevizo and an unknown woman leave the apartment while the victim and her boyfriend were gone. According to the neighbor, Trevizo had on a large back pack and left the apartment on foot. He and his female companion reportedly walked to the street together, kissed and parted ways.

With the information provided by the victim the officer believed there was probable cause to arrest Trevizo for burglary and issued an Attempt to Locate Travizo for arrest.

The following day, the victim reported that she had called GameStop to see if anyone had traded in the PlayStation and games. A store employee confirmed that the items had been traded in the previous day. An officer went to GameStop that afternoon and found that the store’s manager had already set the stolen items aside. The store manager told the officer that a man and woman had tried to trade in the games but were unable to because they did not have proper ID. Another man, who had come with them in the same vehicle had a valid driver’s license and traded the Playstation and games.

The officer watched surveillance footage of the attempted transaction. At approximately, 6:00 p.m. on April 20, a woman attempted to trade them in but did not have identification. Next, Trevizo was seen trying to trade the games but had an expired driver’s license. The officer recognized Trevizo from prior law enforcement contact and booking photos. The store manager said that Trevizo had presented a receipt for one of the games and asked for a refund. The receipt was from January, however, which was beyond timeframe of the store’s refund policy.  The officer took photographs of all three subjects in the video surveillance. The store had paid $182.40 for the trade-ins.

The officer collected the PlayStation and games and contacted the victim. The officer asked if she had receipts to prove ownership of the stolen items. The victim said that her boyfriend always puts the receipts inside the game case and one of the games was purchased in January. The games and PlayStation were secured in an evidence locker at the police station at that time.

On Monday at approximately 9:30 AM authorities were dispatched to Circle K on 1st Avenue to apprehend Trevizo. The suspect had apparently been spotted by the couple he allegedly stole the game system from and they stopped to confront him. Trevizo reportedly pulled a knife on them and told them if they came any closer he would cut them. Trevizo then started to walk away but the couple followed him until police arrived.

When the first officers arrived on the scene, Trevizo tried to run but surrendered a short time later. During a search of his person incident to his arrest, authorities found multiple pieces of foil with burnt residue and a tutor straw in Trevizo’s pockets. Trevizo was taken to the Safford Police Department for questioning.

Photographs were taken of Trevizo’s shoes, which matched the prints left around the windows of the victim’s apartment. While being questioned at the police station, Trevizo initially denied any involvement in the theft of the game system. Then he later admitted to being at GameStop but denied attempting to trade in the games and system.

When the police finished questioning him, Trevizo asked what he needed to do to clear his name. The interviewing officer told him that he needed to be honest. Trevizo asked the officer to sit down. He paused a moment, then said that he knew the story about the thief entering through a window was a lie because he (Trevizo) had pushed in the front door. The officer asked Trevizo if he had taken the Playstation and Trevizo nodded his head. The officer asked if he had traded the PlayStation and Trevizo admitted to getting the money from the trade-in and using it to purchase drugs. He told the officer that the other to people involved in trading the game system did not know it was stolen.

Trevizo was booked into the Graham County Jail for Burglary and Trafficking in Stolen Property.

At approximately noon on Monday, the officer returned to the PlayStation and games to the owners, who said they wanted to pursue charges against Trevizo.