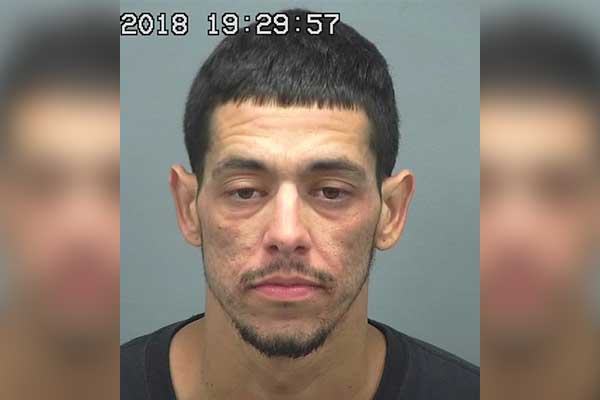 Safford – Authorities were dispatched to a residence on 1stAvenue Wednesday afternoon to speak with a couple, who had reported that their vehicle had been stolen.

The couple advised police that their 2007 Nissan Sentra had been parked on the left side of their house. Just prior to calling the police, they had come home and found their car had been stolen.

Authorities made an initial search of the area but did not find any shoe prints. While police were filling out a stolen vehicle affidavit, a vehicle matching the description of the Nissan Sentra was seen driving north down 1stAvenue. The car turned left on Main Street. Authorities left the residence to follow the car but the attempt to locate the vehicle proved unsuccessful. While an officer was searching for the car, he noticed a subject known through prior contact as Albert Rodriguez, walking on the sidewalk on the south side of the Coca Cola building. The officer noted that Rodriguez looked nervous.

As officers were looking for the vehicle, they received a call regarding suspicious activity near Relion Realty. The reporting party told police that a vehicle had come screeching into the parking lot and a Hispanic male got out, ran to the side of the building and jumped a fence into a neighboring business.

Once authorities had a description of the suspect, they began searching for Rodriguez, who was found on the 1000 block of Central Avenue. According to the police report, Rodriguez appeared to be nervous and was displaying tremors in his hands. His eye’s appeared to be constricted.

While the officers detained Rodriguez, an officer drove the witness by the suspect to see if he was the one who jumped out of the car at Relion Realty and ran. The witness confirmed that Rodriguez was the man seen running from the car.

At the scene where Rodriguez allegedly ditched the car, key fobs for a Nissan and a Dodge were found near the fence. When the key fobs were returned to the victim, he said that they might have been left in the glove box of the Sentra and the car may have been unlocked. The victim also stated that the suspect, Rodriguez, was known to him.

At the police station, Rodriguez told authorities that he had been using methamphetamine and heroin and that he had used both prior to police contact. He said that he had not slept in four days. Rodriguez denied taking the vehicle, but admitted that he did not remember a portion of the day.

Rodriguez was arrested for theft of means of transportation and was booked into the Graham County Jail. After being photographed and processed, the vehicle was returned to the victims.