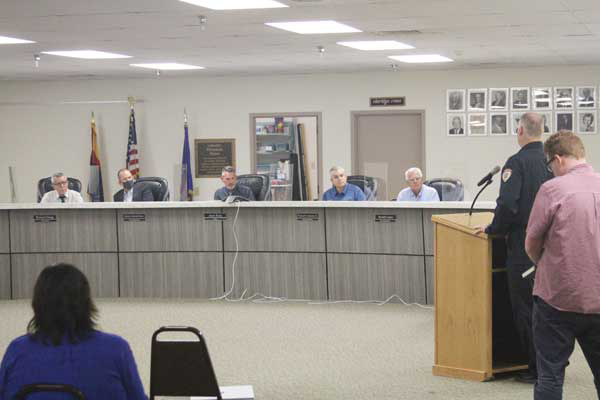 David Bell Photo/Gila Valley Central. Safford Police Chief Glen Orr, second from right, tells the Safford City Council that local businesses have been extremely cooperative when noise complaints have been made by residents.

SAFFORD — Facing a room full of musicians and business owners, the Safford City Council Monday opted not to make a change to the city’s ordinances that would have limited how late music could be played at commercial establishments.

As proposed the ordinance would have limited playing of live and recorded music to before 10 p.m. and it could not be amplified to be plainly heard from a distance of 200 feet.

Sarah Henderson, owner of the Bullpen, explained that live music is the primary driver for her business, especially on the weekends, and a 10 p.m. stoppage would cripple her business.

City Councilman Gene Seale said that any ordinance the city enacts on the business community should also be applicable to the city itself, which could have an impact on such events as SalsaFest, Merry Main Street and the Holiday Light Parade.

The council, led by Vice Mayor Richard Ortega and Seale, suggested tabling the proposed changes before City Manager John Cassella suggested scrapping the idea in its entirety if the council believed the new ordinance would damage the business community.

“I was a little surprised. I was just kind of here to say, ‘Hey, can you just get (the time) extended.’ But, yeah, I’m super excited to know that I have a voice in this town and it means something,” Henderson said.

Police Chief Glen Orr said all the businesses his department has contacted following a noise complaint have been extremely cooperative and willing to work Safford Police to de-escalate any issues.

Orr, who crafted the proposed changes following direction coming out of a City Council work session, also said he believes current city code and state law gives his department the tools needed if an establishment does not wish to cooperate with the police when a legitimate disturbance is taking place.