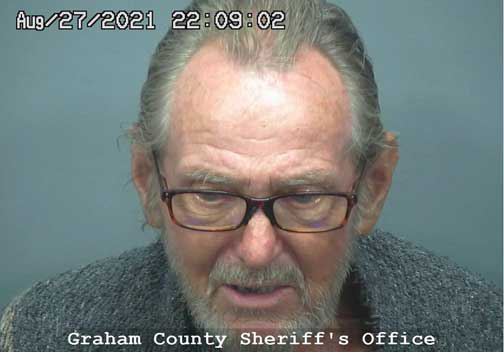 SANCHEZ — A man that said he was “rock hunting” found himself in jail on multiple charges, including disorderly conduct with a firearm.

The victim said Anderson struck him with a hammer when the victim tried to move a front-end loader in front of the now cut fence. The victim also reported hearing a gunshot as the victim returned to his house to call 9-1-1.

The victim provided video of the confrontation and showed deputies his injuries from the hammer blows.

Anderson reportedly told deputies the tractor was blocking the gate, and he was simply trying to drive away, which is why he cut the fence. He also denied striking the victim with a hammer, though he did admit to shooting a .22 caliber pistol into the ground. Anderson was booked into Graham County Jail on charges of disorderly conduct with a firearm, aggravated assault, trespassing in the first degree and criminal damage.