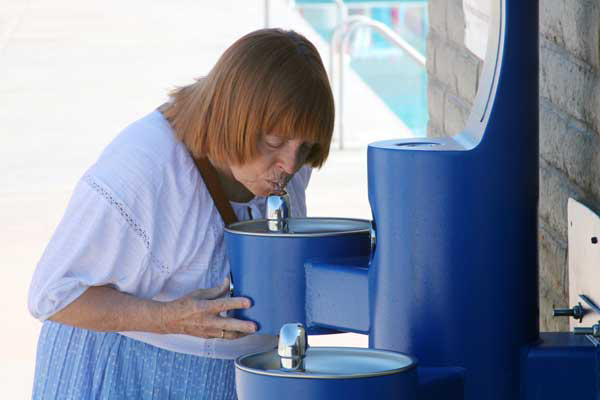 SAFFORD — When Robert Porter passed away in 2017, his family wanted to do something for Safford in his memory. After all, he had worked for the city for 25 years, the last 10 of which as Public Works director.

“I just asked Lance (Henrie, the current Public Works director) what might be a need here at the pool or the parks or some of his projects that he worked on. And he said, ‘Let me think about it,’ and he got back to me and said, ‘You know, we need a new water fountain and they’ve got these new ones that fill up bottles.’ So it went from there,” said Robert’s wife, Joyce Porter.

“This was a little bit more than I intended to go for — this thing is almost $5,300 — I didn’t expect her to pay for all of it but when I told her the cost she didn’t hesitate,” Henrie said.

The pool was the fitting location since it was one of Robert’s first projects with the city. He was even the first person to go down the slide upon its completion.

The dedication was originally planned for last spring, but the COVID-19 pandemic forced the closure of the pool and delayed the debut of the fountain to this year. It will get its first work next week when the first private parties take place, followed by the pool’s official opening to the public Friday, May 21.