On May 25th, Sonja Alberto and her husband were visiting the Safford Library. While they were getting into their car they were approached by a young man. “He said, can you give me a ride up to Stirrup Drive?” Alberto said, recalling the incident that happened days before the burglary. 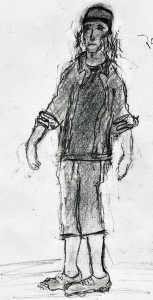 The man who approached her was thin and filthy. He was roughly seventeen to twenty years old. Obviously malnourished, he was about 5’11 tall, Caucasian, and had nearly shoulder-length greasy brown hair. He called himself Kevin.

Alberto and her husband agreed to give the young man a ride since they were headed in that general direction. On the way to Stirrup Drive in Safford, Kevin asked if they had any work for him to do. He said he needed money to return to New Mexico with his girlfriend. “I said well I have a little bit of work. You give me two hours work, I’ll give you twenty dollars for it,” Alberto said, “I took him to our house and I told him I wanted him to trim the top of the hedge. He said fine, and then he asked if he could use my bathroom. He went to the bathroom and he stayed in there twenty-five minutes.” After Alberto asked him what he was doing, Kevin came out of the bathroom and quickly trimmed the hedges. It took him roughly twenty minutes.

After trimming the hedges, Kevin asked for another ride into Safford. That was the last time Alberto saw him. A week later, Alberto’s house was broken into through the back screen door. The burglar took two computers while Alberto slept in her chair. “It was him I know it,” Alberto stated, “Because my dog was familiar with him and let him in. That man had to come right near me to get the first computer and then the second computer. My dog jumped into my lap and woke me up. My dog looked scared and he yelped,” Alberto recalled, “When I woke up the computers were gone. That was the second of June, a week after he worked in my yard.” Police told Alberto that they would check the local pawn shops for the computers.

“Do everything you can to make your home safe,” Sonja Alberto admonished, “This happened in the area of Stirrup Drive in Safford. He said he knew someone on Stirrup Drive. Be careful. Don’t trust anyone you don’t know.”

If you have any information on this crime please contact the local police at 928-428-0808. The featured photo for this article is a picture Alberto drew of the man she believes robbed her house.

Some tips on safety:

Do not pick up hitch hikers.

Do not invite strangers into your home. Be sure to have references for whoever you hire to do landscaping.

Do not advertise your valuables. If someone can see your television and computer from the street, you are asking for trouble.

If you walk in to find your house ransacked, leave IMMEDIATELY. Call the police from your cell phone or from the neighbor’s house. You never know if the thief is still in the house and it is not worth your life to find out.