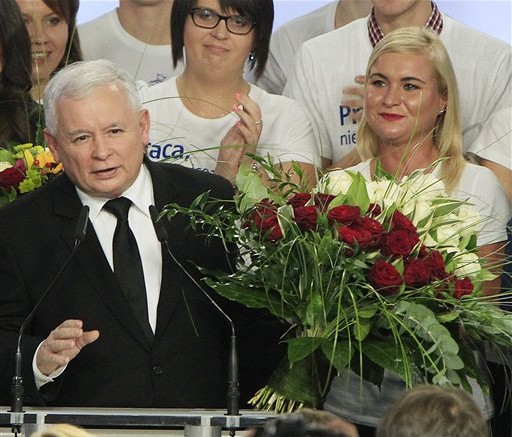 Jaroslaw Kaczynski, left, leader of the conservative opposition Law and Justice party announces victory in the general elections in Poland at the party's headquarters in Warsaw, Poland, on Sunday, Oct.25, 2015. The victory of his Eurosceptic party ends eight years in power of pro-EU, pro-business Civic Platform which voters accuse of being conformist, detached and focused on power rather than on improving the living in Poland.(AP Photo/Czarek Sokolowski)

WARSAW, Poland (AP) — With the election of a right-wing and Euroskeptic party, Poland is expected to become a more inward-looking country, and one less willing to work with European partners to forge common policies on pressing issues like climate change and migrants.

“Poland will be a different Poland in Europe starting from today,” Agnieszka Lada, an expert on foreign affairs, said Monday.

Law and Justice, which is strongly anti-migrant and determined to preserve Poland’s coal industry, swept to power in a parliamentary election Sunday, possibly with enough votes to hold a majority.

According to final results announced late Monday, Law and Justice won 37.6 percent of the vote. Poland’s state electoral commission did not say if that would translate into a majority in parliament once the seats are apportioned, but it appeared likely that the party could have a slim majority in the 460-seat lower house, or Sejm. It also won a majority of seats, 58 out of 100, in the less powerful Senate.

The party has also vowed not to adopt the euro currency until Polish wages have caught up with those in Germany, a prospect that is decades away at best. That marks a setback for Europe’s ambitions for ever greater monetary union given the importance of Poland’s economy, the largest in Central Europe, the sixth-largest in the bloc and one that is developing fast.

The populist party’s strong showing came after a campaign in which it took a hard line on migrants, essentially saying it doesn’t want any, and criticizing the outgoing centrist leadership for agreeing to a take some 7,000 refugees under a European Union plan.

Days before the election, party chairman Jaroslaw Kaczynski even warned that migrants could carry “protozoa and parasites” and other diseases that could be dangerous to Europeans. Several of his political opponents accused him of using language reminiscent of that used by Nazi Germany against the Jews.

“They tapped in so well to the general mood that ‘we don’t want refugees,'” said analyst Jacek Kucharczyk, who believes Law and Justice’s anti-migrant position was a key factor in the extent of its victory.

Kucharczyk, who is the head of the Institute of Public Affairs, a Warsaw think tank, said the political shift reveals the “shallow integration” of Poland into the EU since it joined in 2004.

Many of the party’s supporters take for granted the EU funds that drive growth, and the freedom to easily cross European borders for travel and work. But at the same time they often resist making sacrifices themselves or changing their deeply traditional mindset, for example by accepting gay marriage or other liberal Western values.

“They welcome the EU if it brings funds but not if it brings migrants and the Western decadent lifestyle,” Kucharczyk said. He argues that the party won such a decisive victory because it made people believe that it could “create an invisible wall around Poland,” allowing Poles to keep all the things they like about EU membership while insulating them from what they don’t like.

The party’s candidate for prime minister, Beata Szydlo, insists that the party is “very pro-European” but only wants to protect Poland’s interests.

At some point Law and Justice will have to make a crucial decision on whether it will back former Prime Minister Donald Tusk, of the rival Civic Platform, for a second term as EU president, after his current terms expires in May 2017.

The party has had bad blood for years with Tusk, and some political observers find it almost inconceivable that Law and Justice could give its support to a man they have vilified for years. But refusing to back him and letting him lose the job would also hurt Poland’s interests, depriving it of the high-profile role it now has in Brussels.

Law and Justice could also find its own hold on power jeopardized in the future should Tusk, a former prime minister and political heavyweight, return to Polish politics.

Civic Platform, the centrist, pro-market party which Tusk led for years, has weakened considerably without him at the helm. It won 24.1 percent of the vote, turning it into an opposition party after eight years of running the country.

Three other parties will also make it into parliament: a party led by the right-wing rock musician Pawel Kukiz, which got 8.8 percent; a pro-business party led by an economist, Ryszard Petru, with 7.6 percent, and the agrarian Polish People’s Party, with 5.1 percent. Results also confirmed that no left-wing party made it in at all, the first time in 26 years of democracy that the former communists have no presence in the lawmaking body.

Political observers will also be watching to see what kind of tone the incoming government takes with Germany.

When Law and Justice ran the government from 2005-2007 it liked to nurture historical grievances against Germany, which inflicted massive suffering on Poland during World War II. Ties between the two countries became deeply strained and many Poles learned the lesson that taking a combative attitude today to Germany, a model democracy that helped bring Poland into NATO and the EU, is counter-productive.

Recently the party’s leaders, including President Andrzej Duda, have signaled a desire to engage constructively with Berlin.