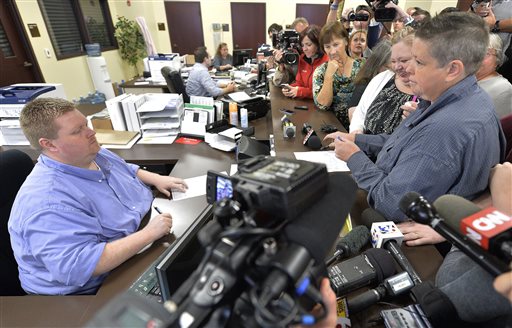 LOUISVILLE, Ky. (AP) — Clerk Mike Johnston prays twice a day, once each morning and once each night, and asks the Lord to understand the decision he made to license same-sex marriage.

“It’s still on my heart,” said Johnston, whose rural Carter County sits just to the east of Rowan County, where clerk Kim Davis sparked a national furor by refusing to issue marriage licenses to gay couples, a decision that landed her in jail.

Johnston is one of Kentucky’s 119 other clerks, many of them deeply religious, who watched the Kim Davis saga unfold on national television while trying to reconcile their own faith and their oath of office. Sixteen of them sent pleading letters to the governor noting their own religious objections. But when forced to make a decision, only two have taken a stand as dramatic as Davis and refused to issue licenses.

And others say they find the controversy now swirling around their job title humiliating.

After the U.S. Supreme Court legalized gay marriage in June, Kentucky Gov. Steve Beshear ordered clerks across the state to issue licenses, launching them along markedly different paths. The clerk in Louisville, Bobbie Holsclaw, issued licenses that very day and the mayor greeted happy couples with bottles of champagne.

Blevins, too, had no problem. He supports gay rights and explained his response in seven words: “When the law changes, your job changes.”

But 100 miles east, Johnston prayed over the decision he knew he would have to make. He consulted several ministers. He considered the oath he swore when he took his office a decade ago. And in the end, he chose to issue licenses.

“I just pray that I’m not doing anything wrong,” he says now, two weeks after he issued his first and only license for a same-sex marriage. “It’s always on my conscience. The devil ain’t going to let it die; he wants us to be worried. The devil is everywhere, trying to get you to make the wrong decision.”

Casey County Clerk Casey Davis and Whitley Clerk Kay Schwartz have joined Kim Davis in halting all marriage licenses out of their office. Casey Davis, who recently rode a bicycle more than 400 miles across Kentucky to show support for Davis, said last week that he is willing to go to jail for his beliefs, too.

Schwartz did not return a series of phone messages.

Others clerks told The Associated Press they are opposed to same-sex marriage, but they weighed their convictions against their oath of office and decided to issue the licenses anyway.

“If I can’t abide by the law, I’d have to resign,” said Teresa Sheffield, the clerk of Monroe County. “According to the Bible, it’s wrong. But I issue them to a lot of people and we’re all sinners.”

Lawrence County Clerk Chris Jobe, who also serves as head of the state’s County Clerk Association, announced in July that 57 clerks, who serve nearly half of the state’s counties, had said they would send a letter of opposition to Beshear, asking that he call a special session to change state law to accommodate their religious beliefs.

But only 17 letters trickled in, according to records from the governor’s office. Most were from small, Appalachian counties in the eastern part of the state.

One, Leslie County’s James Lewis, asked the governor to call a special session, though he did not raise religious objections. He merely thought state statutes could use some clarity.

“It’s the law now, the Supreme Court’s final. It may not be right, but it’s final,” Lewis said. “We have to do the job we took an oath to do. We may not always like it but we have to do it. I respect their position, their religious position on it. But it doesn’t appear they’ll be able to win, I don’t see how they could.”

“We feel we have a loaded gun to our head,” Knott County Clerk Kennith Gayheart typed in a letter also signed by his five deputy clerks. “We strongly resent this ruling and are having a hard time dealing with it.”

Gayheart could not be reached after several calls to his office in Hindman.

Boone County Clerk Kenny Brown, a Baptist who has issued around 10 licenses to same-sex couples despite his religious objections, is leading a charge to get legislators to rewrite the law when they return to the statehouse in January. He hopes lawmakers take marriage licensing out of the hands of the clerks and reroute it to a state agency.

“It was tough. I thought about resigning,” he said. “But I came to the conclusion that the best thing for me to do was to stay here, do the job the people elected me to do and fight on a different level.”