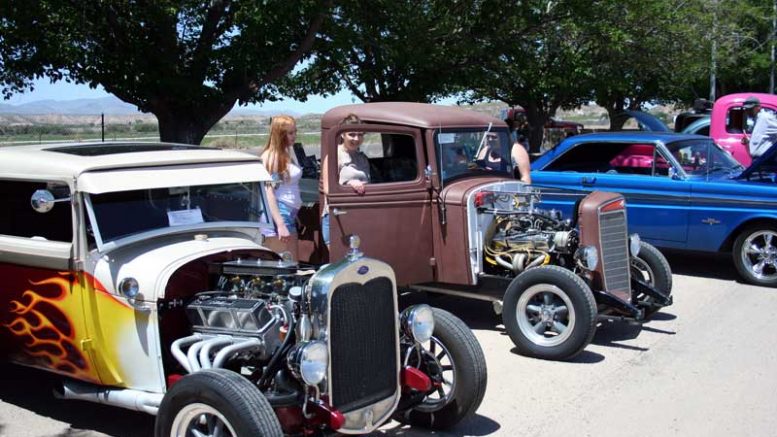 Photo By Gualterio Casias: The car show was one of the highlights of the Greenlee Rampage in Duncan on Saturday, April 15. Here Jordan Puckett, Tyler Puckett and Allyson Walsh check out one of the jalopies entered in the show, which featured about 25 entrants. Vehicles included beautiful cars, jalopies, pickup trucks and Jeeps.

There may not have been the quantity of people or attractions as one sees at the county fair, but there was quality at the annual Greenlee County Spring Rampage on Saturday, April 15, at the county fairgrounds in Duncan. It was, after all, Easter weekend and many folks apparently had other plans. Most apparently went out of town or just stayed home to prepare for Sunday’s many family gatherings. 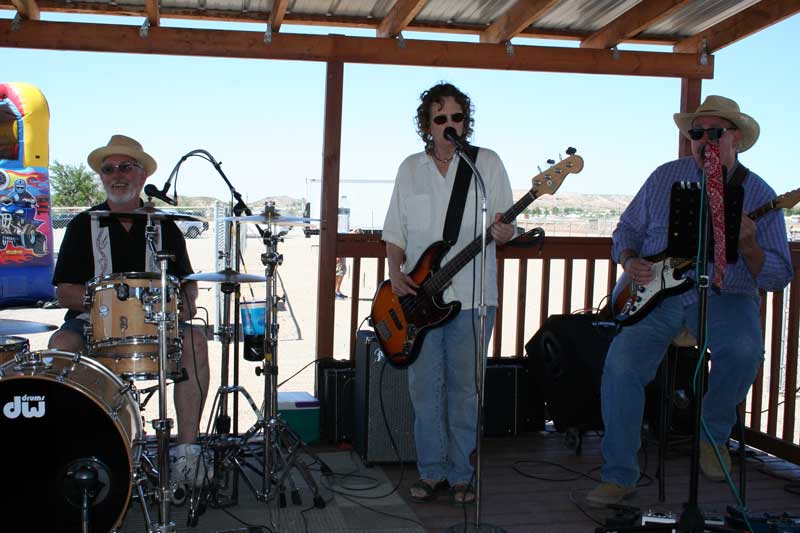 Even so, there was plenty for those who did go to the Rampage to feast their eyes on with the different fare offered by vendors. The band “RedJack” was certainly worth the cost of a ticket to enter the fairgrounds. The band played throughout the day RedJack had a wide range of music from the Rolling Stones of the 1960s, Eagles of the early 1970s and many, many hit traditional and contemporary country-western songs. 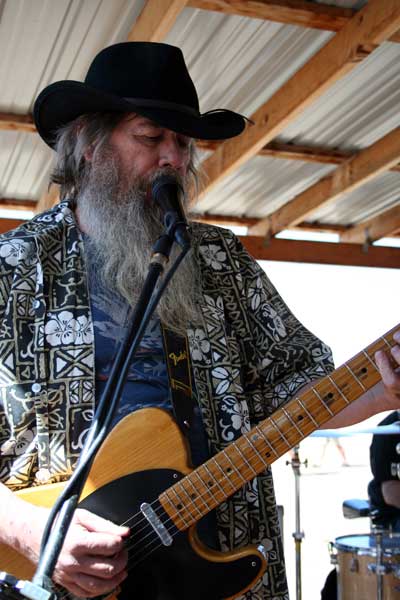 Photo By Gualterio Casias: Lead guitarist Jim Akers puts his heart into it as he plays and sings with the RedJack band at the 2017 Greenlee Rampage in Duncan.

The RedJack musicians, from Safford, appeared to be having a great time although the afternoon audience was quite thin. During breaks they joked and visited among themselves or with audience members. Jim Akers plays lead guitar and offers vocals along with Jim Young on guitar and vocals , Linda Blan on bass and vocals and Roger Martin is the group’s drummer.

Along with RedJack’s music, bull riding drew a great deal of attention Saturday night but results were not available at press time.

Early in the day, a rather unusual event, mud volleyball, drew a strong crowd. The event replaces the traditional mud bogs, which are no longer being held in Arizona counties due to insurance liability issues. The mud volleyball results also were not available at press time.

Another definite highlight of the Rampage was the car show, which had about 25 beautiful vehicles ranging from a bright blue Ford Falcon to pickup trucks, jeeps and jalopies. A great deal of hard work and dedication obviously went into creating what amounted to individual masterpieces of shiny, functioning  metal. 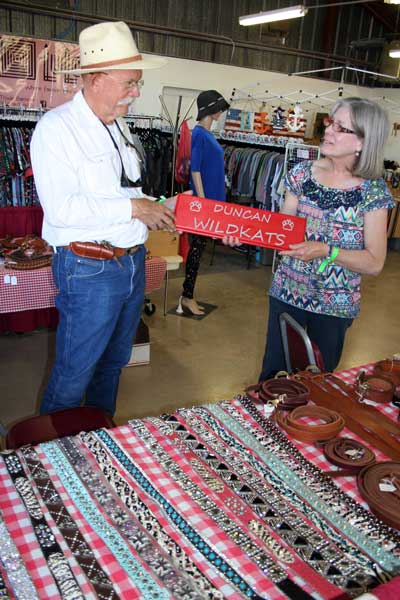 Photo By Gualterio Casias: Tom and Debbie Lister offer many leather goods at their Greenlee Rampage booth on Saturday, April 15. Included in the Lister’s inventory are wooden signs that say Duncan High School Wildkat pride. The signs were made by students in the wood shop class Tom Lister teaches at DHS.

Jordan Puckett, Tyler Puckett, Allison Welsh and Mark Welsh strolled by the vehicles, closely eyeing them and taking close up looks at some. Allison Welsh said her favorite was the bright blue Falcon. Mark Welsh pointed to a large black jeep, a 1985 CJ7, and said that was definitely his show favorite.

Vendors offered quite a variety of goods. There were candles encased in jeweled-glass eggs offered by Lela Belay Galarza’s Mad Wicker Candles. There was leatherwork and many, many types of handmade crafts. Tom and Debbie Lister had a wide assortment of leather goods, many of which were belts and wooden signs reading Duncan Wildkats or other Duncan High School-spirited themes. Lister teaches woodworking at DHS.

Other vendors included Dally Sexton’s Cowgirl Kisses. An independent SeneGence distributor, Sexton offers “smudge-proof, kiss-proof and long-lasting” products. No kisses, only handshakes, were offered by the Greenlee County Republicans, but their booth did attract quite a bit of attention. They held a raffle for two BB or pellet rifles and other related gear. Many youngsters eyed the rifles with what appeared a longing desire to own one of them.

Duncan Girl Scout Troop 326 leaders and scouts sold Girl Scout cookies and more. The troop sold spaghetti and meatballs and meatball sandwiches, both of which were a sensation. The only other organization selling food was the Duncan Women’s Club, which offered burritos, hamburgers and soft drinks. 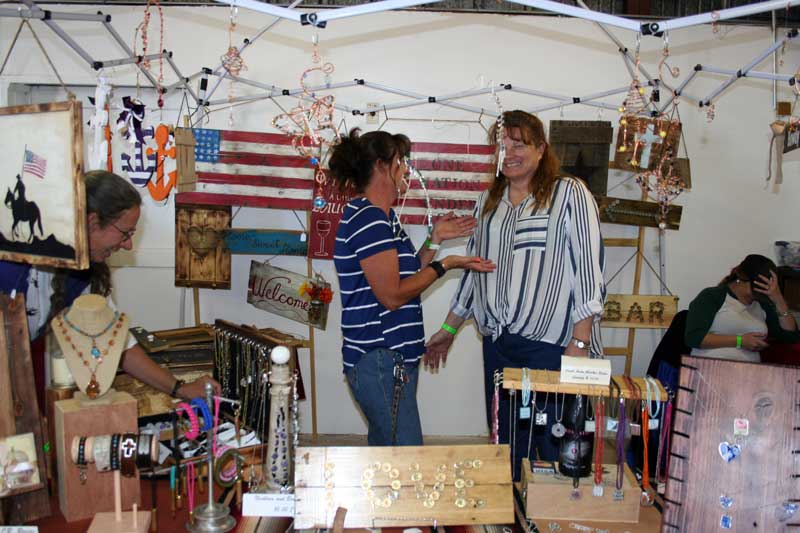 Photo By Gualterio Casias: Kelly Greene, left and Julie Hancock of Kelly’s Creations exhibit a variety of handmade items that includes jewelry. Greene is based in Silver City, N.M. and Hancock in Lordsburg, N.M. The two flags in the background and the painting of a cowboy are done on old wood, which the team refers to as “recycling.”

Girl Scout Morgan Bellamy basically ran the show with a very businesslike posture. However, her beautiful smile resulted in many who passed by the booth becoming customers who bought at least one box of cookies. Someone commented, “Maybe someday Morgan will make a good Marine. She’s tough enough and seems like she has her act together.”

Skyla Bellamy, one of the youngest girls in the troop, held a jeweled coyote skull. It was one of two skulls, along with handmade colorful jewelry, the scouts had for sale. Joel Bellamy, a well-known figure in the Duncan community, decorated the skulls and made the jewelry. 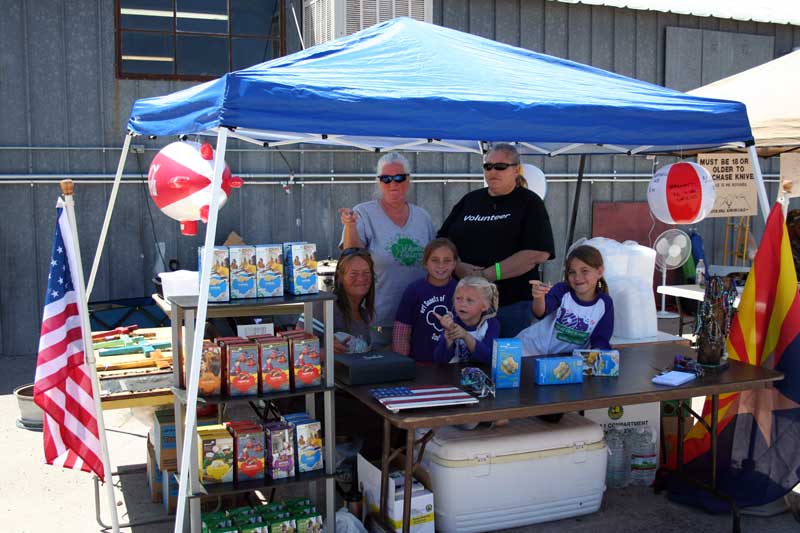 One of the few out-of-town vendors was Kelly’s Creations, based in Silver City, N.M. Wares included hand-painted wood flags, art and jewelry. Kelly Greene, of Silver City, and Julie Hancock of Lordsburg, N.M., had several visitors stop by their booth. Hancock emphasized that everything they had was handmade. She said she and Greene take old pallets, windows and the such and recycle them into art. 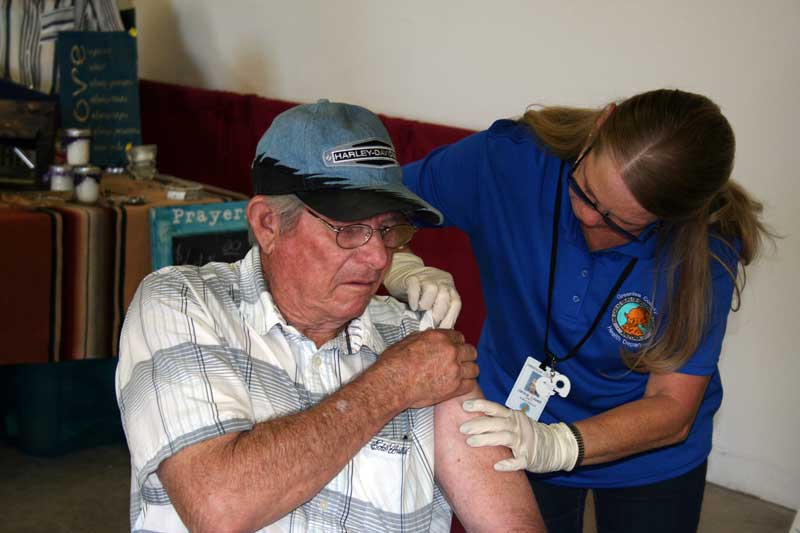 Photo By Gualterio Casias: Elias Vaca receives a vaccination shot from Janice Lovett of the Greenlee County Health Dept. The GCHD offered information, along with vaccines at the 2017 Greenlee Rampage on April 15. Lovett and Jennifer Padilla hosted the booth.

One county official said Monday that no doubt the Rampage being held on Easter weekend resulted in fewer folks attending. She said scheduling the date was difficult but organizers saw it was most likely the least busy weekend in April or May. “There are just so many things going on these two months, that’s why this weekend was chosen,” the official said.