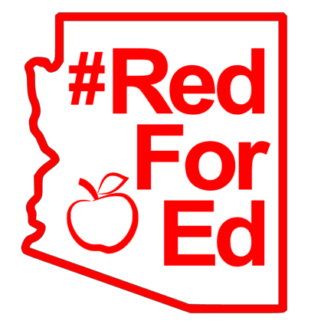 Arizona teachers are set for a statewide walkout on Thursday if their demands for a 20% pay increase and increased school funding are not met. Arizona Governor, Doug Ducey, proposed a 20% pay increase that would boost teacher pay by 10% for the upcoming school year, then 5% for 2019 and another 5% for 2020, but teacher’s groups say Ducey’s isn’t enough.

Last week, Governor Ducey vetoed legislation drafted by House Republicans. making it clear that he wanted legislation that would meet the demands of Arizona teachers.

“Please send me a budget that gives teachers a 20 percent pay raise by 2020 and restores additional assistance,” Ducey wrote in his veto message.

Ducey’s position on teacher pay shifted dramatically in recent weeks after protests and the threat of a walk out. Previously Ducey had held his ground against pay raises, insisting that there was no money available in the budget. Legislative budget analysts say that Ducey’s proposal would create a budget deficit of $260 million by 2020.

As of today, the governor and the legislature seem to be at odds. Ducey has sent a message that the only plan he’s willing to adopt is his own, while lawmakers are struggling to come up with a plan to accommodate teacher’s demands and balance the budget. The one thing they don’t have is time.