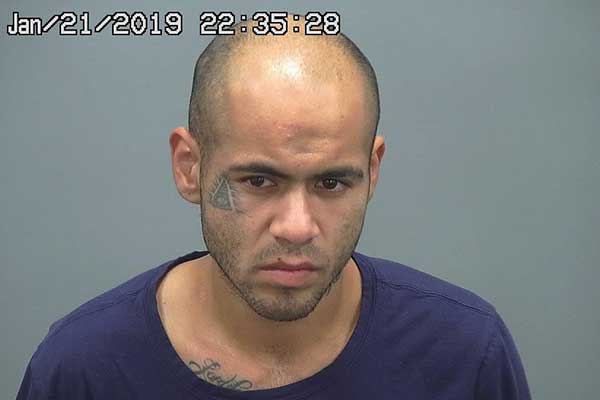 A store employee told the officer that a Hispanic male wearing a beanie with tattoo’s on his neck and face came in and took the purse from the ATM. The male apparently asked who’s purse it was, then looked inside and said he knew who it belonged to and took it. The man reportedly returned a few minutes later and bought beer and a cigar. The suspect was known to come in frequently and was remembered for being in the news because of an incident involving a knife.

The officer reviewed video footage showing the suspect enter wearing a blue long sleeve shirt, camo pants, and a black beanie. The suspect is seen picking up the purse, looking inside and then leaving with it. The officer recognized the suspect, identified as Martin Carrasco, because of a previous case involving Carrasco. When witnesses were shown a picture of Carrasco they were able to positively identify him as the suspect.

Police officers found Carrasco at a residence where he was staying. They knocked on the door and heard a male voice ask, “Who is it?” The officers announced that it was the police and that they needed to speak with Carrasco. Carrasco opened the door. He was wearing the camo pants as seen on the video, however, he was shirtless. Carrasco was hesitant to speak with the officers and when asked, stated that he did not know why they were there. After an officer stated they needed to get back the gun and purse he took, Carrasco told them it was in the house. Carrasco allowed the officers to enter the house and retrieve the firearm which was inside the front door on top of a refrigerator and the purse was in the living room and had clearly been gone through. There were three magazines and some loose 9 mm ammo in the purse. On the couch, officers saw the blue long sleeve shirt along with the beanie Carrasco was seen wearing in the video.

When an officer asked Carrasco to explain what happened, he stated he went to buy beer and saw the purse on the ATM. Carrasco took it, opened it, and saw the gun inside. Carrasco said he took the purse back to his house and left it there. He then returned to the store and bought some beer. Carrasco stated he knew the gun was real and got excited when he saw it and reported he was going to use it for protection. When asked, Carrasco stated he wasn’t sure if he was allowed to possess a firearm. He reported to police he had been to prison about two years ago and was convicted of possession of drug paraphernalia.

Carrasco was transported to the Graham County Jail and booked for theft and weapons offense.