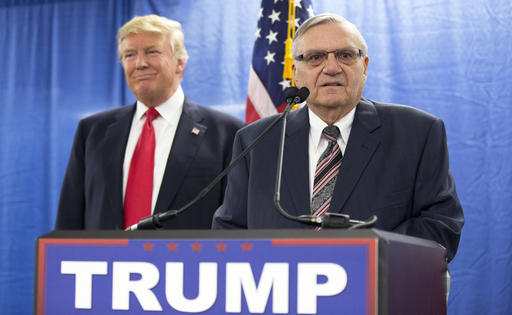 FILE - In this Jan. 26, 2016 file photo, Republican presidential candidate Donald Trump, left, is joined by Maricopa County, Ariz., Sheriff Joe Arpaio during a new conference in Marshalltown, Iowa. Arizona's presidential primary marked a return to the political spotlight for Arpaio, an influential figure in Republican circles on immigration enforcement who has spent the last year lying low as he faces the possibility of criminal charges. His endorsement of Republican front-runner Donald Trump led to a round of TV interviews and appearances with the candidate, including a rally in Arpaio's hometown.(AP Photo/Mary Altaffer, File)

PHOENIX (AP) — First came the endorsement. Arizona’s contentious Sheriff Joe Arpaio showered his support on Donald Trump, then campaigned for him ahead of the state presidential primary. He appeared on TV and at a huge rally with the Republican presidential front-runner in the lawman’s hometown.

Then came the criticism. Democrats Hillary Clinton and Bernie Sanders denounced the sheriff known for his hardline stance on illegal immigration, calling him out at their own campaign events.

The national exposure leading to the March 22 primary marked a return to the political spotlight for Arpaio, an influential figure in Republican circles who has spent the last year lying low as he faces the possibility of criminal charges in his home state.

Trump invoked Arpaio’s name in his calls for tougher immigration enforcement, while Clinton and Sanders called his tactics disrespectful and divisive.

“It is easy for bullies like Sheriff Arpaio to pick on people who have no power. If I’m elected president, the president of the United States does have power,” Sanders told a crowd in Flagstaff. “Watch out, Joe.”

The 83-year-old sheriff is seeking a seventh term this year. Over the last year, he has faced unrelenting scrutiny because of a racial profiling case in which he has acknowledged disobeying court orders. He also was accused of secretly investigating the case’s judge in a bid to discredit him.

The judge is mulling whether to hold Arpaio in civil contempt of court for defying his orders to stop his immigration patrols. Such a finding would bring him a step closer to a possible criminal contempt case that could expose him to fines and even jail time. The judge also has said Arpaio’s office doesn’t adequately investigate alleged wrongdoing by his officers and has questioned whether the sheriff testified truthfully about the secret investigation.

The Maricopa County sheriff is responsible for providing police services to 4 million people in metro Phoenix. Seven candidates have filed papers so far to challenge Arpaio, but none has come anywhere close to matching the campaign financing that has helped the lawman get elected in the past. He spent $7.9 million during his 2012 campaign and raised nearly $2.5 million in contributions over the last year.

County Supervisor Steve Gallardo, a longtime Arpaio critic, said other prospective candidates are considering a challenge to Arpaio but are waiting to see what the judge’s ruling will be.

“This is the most vulnerable he has been,” Gallardo said. “And I think over time, at least for the next few months, there will be a lot on the campaign trail you can talk on Joe Arpaio — and it won’t be anything positive.”

Former Buckeye Police Chief Dan Saban, who joins four other Republicans in challenging Arpaio this year, said the sheriff’s political luster is wearing off and that Arpaio would probably lose if the election were held today.

“His organization is falling apart, and he is out playing presidential politics,” said Saban, who unsuccessfully challenged Arpaio in 2004 and 2008.

Arpaio disputes that he has taken a low profile over the last year and said he isn’t bothered by criticism from Sanders and Clinton.

“I love it,” Arpaio said. “They pushed my polls up.” But he pointed out both Democrats mispronounced his name during their attacks.

Arpaio said he has stayed politically active over the last year through endorsements of other Republican candidates and GOP fundraising efforts.

He said he doesn’t worry his support is slipping among voters, even though his 2012 re-election race marked his second tightest election in his 23 years as sheriff. His closest challenger lost by 6 percentage points.

“I don’t need this controversy for attention,” the sheriff said. “I could have stayed out of this. Come on.”