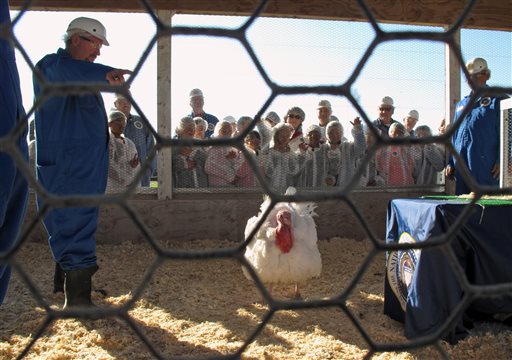 This picture taken Nov. 19, 2015, in Modesto, Calif., shows a turkey selected for a pardon from the Thanksgiving dinner table by President Obama. A class of fifth grade students from nearby Eisenhut Elementary School cheered for their favorite as Foster Farms staffers picked the prized bird. The lucky turkey was selected on Thursday for a trip to the White House, where President Obama will pardon it in an annual tradition. (AP Photo/Scott Smith)

MODESTO, Calif. (AP) — He strutted, he gobbled and he puffed up his feathers like his life depended on it. And it did.

The turkey’s outgoing personality and good looks helped spare him from the Thanksgiving plate. The bird, named Tom One, was chosen for a presidential pardon from a dozen finalists Thursday at a Northern California farm.

The bird will board a flight called Turkey One in San Francisco to head to the White House ceremony with President Barack Obama ahead of the holiday. After that, he will be sent to live at a farm in Virginia.

Picking the lucky gobbler wasn’t easy. He was among a dozen birds vying for the pardon at a Foster Farms ranch in Modesto, California, where class of fifth-grade students cheered on the show.

“I think that bird is going to be lucky for the rest of his life, man,” said Angel Avila, a 10-year-old student at Eisenhut Elementary in Modesto.

As the students watched and shouted for their pick, Foster Farms manager Joe Hedden and his team inspected the birds. They put each on a stand and ran their hands over the feathers, body and head.

They let each walk around and waited for something to catch their attention.

Tom One was a clear winner, putting on a show by strutting his stuff: He puffed up his bright-white feathers and gobbled. Above all, personality won the day, Hedden said.

“We want to present the president with a well-mannered and socially skilled turkey that’s going to act right on the big day,” he said.

The first turkey was officially granted a presidential pardon in 1989 by President George H.W. Bush, starting an annual holiday tradition.

Foster Farms won the honor of providing this year’s turkey. They selected the best one, and an alternate, called Tom Two.

Hundreds of students from throughout California sent in their suggested names for the turkeys, which will be given their formal names at the White House.

“I think it’s really an opportunity for any president — whatever his party — to reach out to the American public,” Brill said. “This is one of the few days that we all share something in common.”