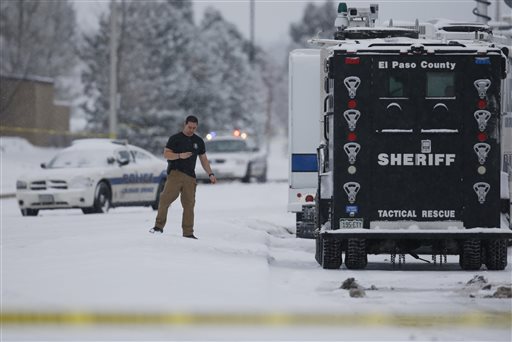 Police investigate at a Planned Parenthood clinic and area around the building north of a strip mall early Saturday, Nov. 28, 2015, in northwest Colorado Springs, Colo. A gunman who opened fire inside a Planned Parenthood clinic was arrested Friday after engaging in gun battles with authorities during an hourslong standoff that killed three people and wounded nine others, officials said. (AP Photo/David Zalubowski)

COLORADO SPRINGS, Colo. (AP) — The latest on the shooting at a Planned Parenthood clinic in Colorado. (All times local):

The father of the police officer killed in the Colorado Planned Parenthood shooting says his son loved figure skating, was a great dad and was loved by all in his department.

David Swasey told the Boston Globe his son, Garrett, moved to Colorado from Massachusetts in the 1980s to pursue figure skating and won a national championship in the junior ranks.

Forty-four-year-old Garrett Swasey was the first of three victims to be identified in the shootings at the clinic in Colorado Springs. Married with two children, Swasey worked as a police officer at the University of Colorado-Colorado Springs.

Swasey was originally from Melrose, Massachusetts, where Police Chief Michael Lyle said he dedicated much of his life to helping others.

The mayor of Colorado Springs says authorities aren’t ready to discuss a possible motive of the gunman who attacked a Planned Parenthood clinic there but says people can make “inferences from where it took place.”

John Suthers says investigators have interviewed 57-year-old Robert Lewis Dear of North Carolina but says authorities still want to learn more about him, suggesting that his mental health was part of the investigation.

Before being elected mayor earlier this year, Suthers served as the state’s attorney general and said he investigated complaints of misconduct against Planned Parenthood. He praised the security staff working at the clinic Friday and said they were “incredibly helpful” in working with police to monitor the gunman’s whereabouts on surveillance video and advising on the building’s layout.

The man who police say attacked a Planned Parenthood clinic in Colorado had lived part of the time in a cabin with no electricity or running water in the North Carolina mountains.

His neighbors in Black Mountain said Robert Lewis Dear kept mostly to himself. But James Russell said when Dear did talk, it was a rambling combination of a number of topics that didn’t make sense together and he tended to avoid eye contact.

Dear’s cabin was a half-mile up a curvy dirt road about 15 miles west of Asheville. A cross made of twigs was nailed to the wall of the pale yellow shack on Saturday.

Dear also spent time in a trailer in the nearby town of Swannanoa.

President Barack Obama says the Planned Parenthood shootings show the urgent need “to do something about the easy accessibility of weapons on war” for “people who have no business wielding them.”

“Enough is enough,” Obama says in a statement a day after a gunman killed three people at a Colorado clinic.

Obama says it’s not known what motivated the shooter, but it’s clear “more Americans and their families had fear forced upon them” — and that, the president says, “is not normal. We can’t let it become normal.”

He says if “we truly care about this — if we’re going to offer up our thoughts and prayers again, for God knows how many times, with a truly clean conscience,” then America must make it harder to get guns.

Police have identified the suspect in an attack at a Planned Parenthood clinic in Colorado Springs as Robert Lewis Dear of North Carolina.

The 6-foot-4-inch man was taken into custody Friday after an hourslong standoff and shootout. Jail booking records indicate that Dear is due in court on Monday.

No other details about the suspect were immediately available, including whether he had any connection to Planned Parenthood. Police say three people, including an officer, were killed in the attack.