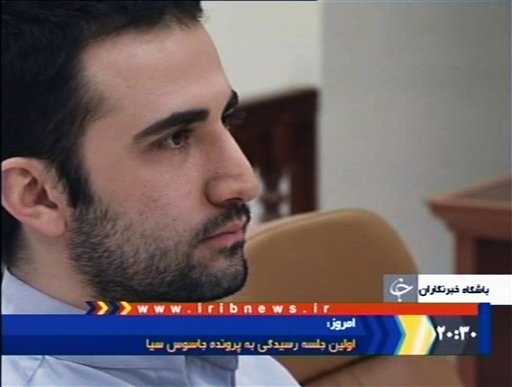 FILE - In this Tuesday, Dec. 27, 2011 video frame grab image made from the Iranian broadcaster IRIB TV, U.S. citizen Amir Mirzaei Hekmati, accused by Iran of spying for the CIA, sits in Tehran's revolutionary court, in Iran. Iran state television has reported that the government has released several dual-national prisoners. The Associated Press has confirmed that three of them were Washington Post reporter Jason Rezaian, former U.S. Marine Amir Hekmati and pastor Saeed Abedini. (AP Photo/IRIB, File) IRAN OUT TV OUT

VIENNA (AP) — The latest developments as Iran and world powers prepare to implement a landmark deal reached last year to curb Iran’s nuclear activities in exchange for the lifting of international sanctions (all times local).

Among the seven Iranians affected by the U.S.-Iranian prisoner swap is Bahram Mechanic, who has been jailed since his indictment last April on charges of illegally exporting microelectronic technology to Iran.

Defense lawyer Joel Androphy said his client was “elated” to be pardoned Saturday but says Mechanic’s “been incarcerated for 9 months for a crime that he’s just accused of but did not commit.”

Two other defendants in the case, Khosrow Afghahi and Tooraj Faridi, are also among those being offered clemency.

Androphy said the products his client was accused of providing to Iran were essentially surge protectors but the Justice Department “blew it up into some sort of national security terrorism threat.” He says Mechanic is “basically a victim of the trade issues between the United States and Iran.”

The wife of an Idaho pastor who is among four detained Americans being released from Iran says the news is “a huge burden lifted off.”

Naghmeh Abedini told The Associated Press on Saturday that after she learned that Iran was going to release Pastor Saeed Abedini, she woke her kids up and told them “Daddy was coming home.”

She said in a telephone interview from Boise that “they were just excited. They couldn’t believe it.”

The Boise man was detained for compromising national security, presumably because of Christian proselytizing, in September 2012. He was sentenced in 2013 to 8 years in prison.

Iran agreed Saturday to release four detained Americans in exchange for seven Iranians held or charged in the United States. A fifth American detained in Iran, a student, was also released in an unrelated move.

The publisher of The Washington Post says he “couldn’t be happier” to hear that the paper’s reporter, Jason Rezaian, had been released from Iran’s Evin Prison on Saturday.

In a statement, publisher Frederick J. Ryan Jr. also says more information will be available once he has more details and can confirm Rezaian has safely left Iran.

Rezaian had been held more than 543 days on espionage and related charges. He is among four detained Americans released Saturday in exchange for seven Iranians held or charged in the U.S.

The release is part of a major diplomatic breakthrough as implementation of the historic nuclear deal between Iran and six world powers appears imminent.

Republican presidential hopeful Marco Rubio and other Republicans say Americans should never have been captured in the first place and Rubio blamed the Obama administration’s willingness to do prisoner swaps in the past.

In Iowa, Rubio argued that governments were taking Americans hostage because they believe they can gain concessions from the Obama administration. He mentioned the June 2014 swap in which the United States exchanged Army Sgt. Bowe Bergdahl, who had been held by the Taliban for five years, for five top Taliban commanders at Guantanamo Bay, Cuba.

Iran’s transport minister says his country has reached a deal with the European consortium Airbus to buy 114 passenger planes once international economic sanctions are lifted as part of a nuclear deal.

Minister Abbas Akhondi is quoted by the official IRNA news agency as saying Saturday that the first shipment of planes will arrive in Iran before March 20 to upgrade Iran’s aging fleet. Iran has said it is looking to buy 400 passenger planes over the next decade.

Iran is already waiting for the imminent release of a U.N. compliance report that would trigger the lifting of sanctions under a landmark deal reached with world powers last July over Iran’s nuclear program.

U.S. officials say a fifth American detained in Iran, a student, has been released in a move unrelated to a prisoner swap earlier between the two countries.

They say the student, identified as Matthew Trevithick, was released independently of the exchange on Saturday and already was on his way home. They spoke about the prisoner exchange on condition of anonymity because they were not authorized to discuss it publicly.

Iran has agreed to release four detained Iranian-Americans in exchange for seven Iranians held or charged in the United States.

U.S. and Iranian officials say Iran is releasing four detained Iranian-Americans in exchange for seven Iranians held or charged in the United States.

The major diplomatic breakthrough was announced Saturday as the implementation of a landmark nuclear deal appeared imminent.

U.S. officials say the four Americans, including Washington Post reporter Jason Rezaian, former Marine Amir Hekmati and pastor Saeed Abidini, were to be flown from Iran to Switzerland on a Swiss plane and then brought to a U.S. military base in Landstuhl, Germany, for medical treatment.

In return, the U.S. will either pardon or drop charges against seven Iranians — six of whom are dual citizens — accused or convicted of violating U.S. sanctions. The U.S. will also drop Interpol “red notices” — essentially arrest warrants — on a handful of Iranian fugitives it has sought.

There are conflicting reports about the identities of the four prisoners released by Iran.

Iranian state TV on Saturday announced that four prisoners holding dual Iranian-American citizenship were released, without elaborating. The announcement fueled speculation that Jason Rezaian, the jailed Washington Post bureau chief, was among them.

An official close to Iran’s judiciary told The Associated Press that the prisoners included Rezaian, former U.S. Marine Amir Hekmati and pastor Saeed Abedini. The official spoke on condition of anonymity because he was not authorized to speak to the media.

It was unclear who the fourth person was. Iranian state TV later reported it was Siamak Namazi, the son of a politician from the era of the shah, while the official IRNA news agency said it was Nosratollah Khosravi-Roodsari. The accounts could not be reconciled immediately.

A source close to Iran’s judiciary is telling The Associated Press that four Iranian-Americans have been freed from prison in Iran: Washington Post bureau chief Jason Rezaian as well as Amir Hekmati, Saeed Abedini and Siamak Namazi.

The source, who spoke on condition of anonymity because he was not authorized to speak to the media, said the four were freed Saturday in exchange for the release of seven Iranians held in U.S. prisons. He didn’t name the Iranians but said the seven have already arrived in Tehran.

He says “authorities at the top had agreed to free the four Iranian-Americans only after the Iranian prisoners land in Tehran.”

A source close to Iran’s judiciary is confirming to The Associated Press that jailed Washington Post bureau chief Jason Rezaian is one of four dual-national prisoners freed today by Iran’s government.

Iranian state television announced the release of the four prisoners on Saturday but gave no names.

The source spoke on condition of anonymity since he was not authorized to publicly speak to the media.

The report Saturday did not identify the prisoners but it comes amid speculation that jailed Washington Post bureau chief Jason Rezaian, a dual Iran-U.S. citizen convicted of espionage in a closed-door trial in 2015, could be among them.

The report by the semi-official ISNA news agency quotes a statement from the Tehran prosecutor’s office as saying the inmates were freed “within the framework of exchanging prisoners,” without elaborating.

The U.S. would not immediately confirm the Iranian report. But the family of one of the U.S prisoners received unofficial word from Iran that their relative was being released today, according to a person close to that family.

The EU’s top diplomat has met with Iran’s foreign minister for talks on implementing the nuclear deal between Tehran and six world powers, as the U.N. atomic agency works on a report certifying that Iran has met its commitments under the accord.

IAEA certification that Iran is honoring its obligations would trigger sanctions relief for Iran worth an estimated $100 billion.

Under the July 14 deal between Iran and six world powers, Tehran Iran agreed to crimp programs it could use to make nuclear weapons in return for an end to international nuclear-related sanctions

Iran says it has no interest in such arms.

Iranian hard-liners are accusing moderate President Hassan Rouhani of “burying” the country’s nuclear program as Tehran and world powers are on the verge of implementing a historic nuclear accord.

Under the front-page headline “Nuclear Burial,” Hard-line daily Vatan-e-Emrooz on Saturday criticized the removal of the core of Iran’s only heavy water reactor, which was filled in with cement earlier this week as one of the final steps under the agreement.

The Javan daily says filling in the reactor is “hurting national pride.”

It says the Iranian people hope that the “bitterness of filling the Arak reactor with cement will be accompanied with the sweetness of filling their table,” referring to the lifting of crippling international sanctions.

Iran’s foreign minister says an imminent compliance report by the U.N. nuclear agency will trigger the implementation of the historic nuclear accord reached with world powers last year, bringing a “good day” for Iran.

Mohammad Javad Zarif says the report will mark “Implementation Day,” when world powers provide Iran with billions of dollars in sanctions relief in exchange for it curbing its nuclear program.

Speaking in Vienna on Saturday, where he was to meet with U.S. Secretary of State John Kerry and top EU diplomat Federica Mogherini, Zarif called for greater cooperation to fight the “terrorism and extremism” that has engulfed the Middle East. His comments were broadcast on state TV.