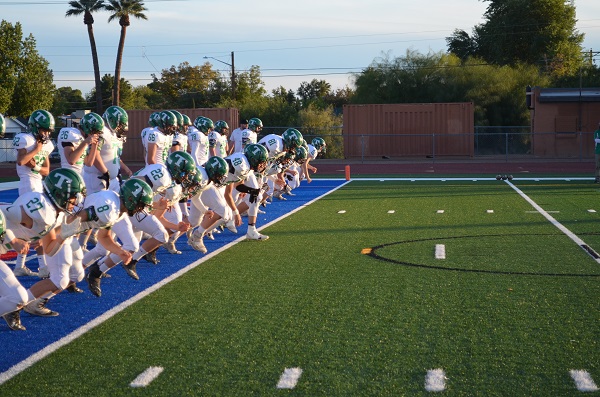 Thatcher prepares for their game against Phoenix Christian Saturday at Arcadia High. Photo by Lee Patterson

SCOTTSDALE — Thatcher was looking to knock off Phoenix Christian for the fourth straight season in the playoffs and move into next Friday’s 2A State Championship game. That wasn’t the case this year though, a very tough Cougar squad shut out the Eagles 28-0 to move into their first title game since 2008.

PC running back Man Man Freeman was a problem all night for the Eagles. He scored on runs of 37, 34 and 1 yard en route to 225 yards total. The PC defense was just as impressive though as they only allowed 9 Thatcher first downs all night long and forced 2 turnovers.

Thatcher finished the season with an 8-5 record and ends a very impressive playoff run. The Eagles won the last three 2A State Titles and were a whopping 14-1 in that span in the playoffs. This year’s senior class were a part of 15 post season games which is another full year of games.

Phoenix Christian will play Round Valley for the 2A State Championship. PC won the regular season matchup 21-16 in the Dome.