Audiobooks have become very popular. The printed book market has struggled in recent years with consumers turning to technology to provide entertainment.  But audiobooks bridge the gap between the traditional book market and new forms of technology.

Sales revenues of audiobooks have increased dramatically, more than doubling between 2010 and 2016. The growing demand for audiobooks can be seen in the fact that the number of audiobook titles published in the United States has grown from approximately 6,200 volumes published in 2010 to over 50,000 in 2016.

In a bygone era, publishers held all the power of publication. That has slowly been changing as the digital age has progressed. The Internet has made it possible for authors to bypass traditional publishing and self-publish their own books. Electronic reading devices like Amazon’s Kindle and Barnes and Noble’s Nook make it easy to download and read books without going to a store to make a purchase. Digital technology has also given rise to the increased popularity of audiobooks. People can easily download them to a smartphone, plug in some earbuds and listen while doing other things.

Audible.com is considered the United States’ largest audiobook producer and retailer. Audible began selling digital audiobooks in 1995. They introduced the first production-volume digital audio player nearly four years before Apple introduced the iPod. Audible boasts a catalog of over 425,000 titles. In November 2017, Audible claimed its customers had listened to over one billion hours of content during the year.

Audible was purchased by Amazon in 2008. In 2011, Audible launched Audiobook Creation Exchange (ACX), an online marketplace to connect authors and rights holders with narrators to produce audiobooks. The platform proved so popular that by 2012 Audible had received more titles through ACX than from it’s top three audio providers combined.

The ACX platform ushered in a new era in audiobook production and may have even created a new cottage industry – the home-based audiobook narrator. In the past, audiobooks were produced and recorded by publishers, or contracted out to production houses. In order to become an audiobook narrator, you had to audition with an audiobook production company, and often had to live close to their recording facilities. That all changed with the advent of inexpensive digital audio workstations and low-cost, quality studio microphones. Now, anybody with a computer and a decent microphone can conceivably become an audiobook narrator. It helps to have an acoustically balanced isolation booth. Recordings done in your dining room often don’t work out so well.

To control the influx of new, inexperienced, DIY audiobook narrators, ACX implemented a set of standards to ensure the audio quality of their audiobooks. Each audiobook submitted to ACX goes through a screening process to verify that it meets the minimum audio quality standards. If an audiobook narrator submits an audio file that doesn’t meet the quality standard, ACX will reject the file and require that it be re-recorded to meet the minimum standard.

In order to have an audiobook on Audible.com, the print version of the book must be available on the Kindle platform. Kindle has opened the way for authors to self publish their work. Amazon even has it’s own self publishing platform for self-published authors that guides them through the process. In addition to digital books, on-demand print versions are also an option for authors.

Once the book is available on Kindle, the author or rights holder can place it on ACX and accept auditions from narrators. Potential narrators can look through a list of books looking for narrators and audition for books that interest them. Authors can also look through narrator profiles and listen to demos to find a narrator they think would fit their book.

In August 2018, I received an email through ACX from Ted, Lazaris. The message simply read: 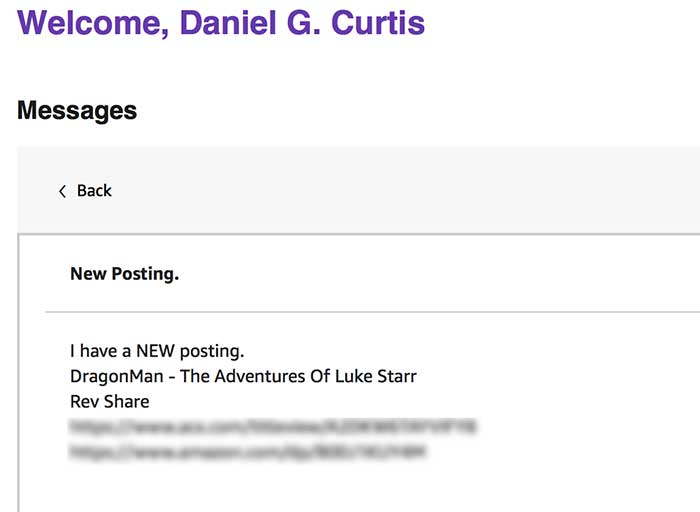 I auditioned for the book and was offered a contract to produce it. Here’s the audition I submitted:

Once the contract is accepted, the audiobook narrator has a specified amount of time to produce the audiobook. The first step is to record and upload the first 15 minutes of the book for the author to listen to and provide feedback. Once the author accepts the first 15 minutes, the narrator goes to work recording the book chapter by chapter. Each chapter is uploaded to ACX separately. The narrator also records opening and closing credits. Here’s a screenshot of the upload page on ACX: 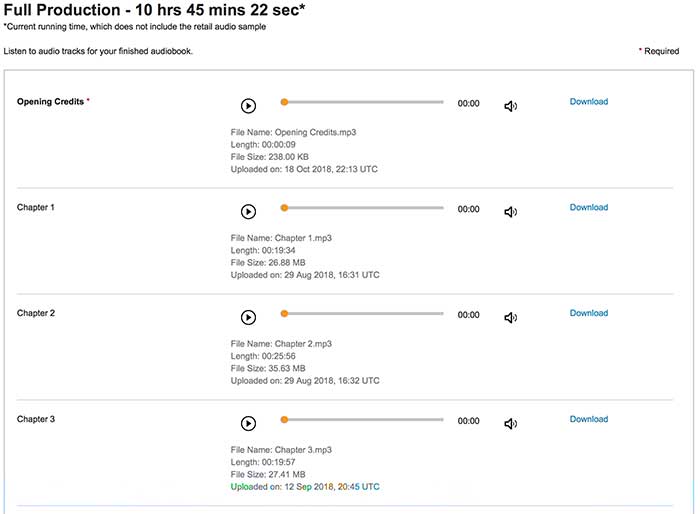 Once all the chapters are finished and uploaded, the narrator clicks a button that alerts the author that the narration is finished. The author then has the opportunity to listen to the finished book before it’s prepared for publication. Usually, the author keeps tabs on the production process and listens as the chapters are uploaded, which was the case with DragonMan. After listening to chapter 9, the author sent me a message that there was a sentence repeated. I edited the mistake and uploaded the corrected version of the chapter.

When the author is satisfied with the production, he or she notifies ACX. The final phase takes about ten days. In this phase, ACX submits the audio recordings to a series of quality checks to make sure it meets their quality standards. Then the audiobook is processed and converted to the audible format. Once it’s available on ACX the author and narrator are notified so they can start promoting it.

The production for audiobooks is generally done in an isolation booth that is acoustically treated to reduce ambient and acoustic noise. This is where I record: 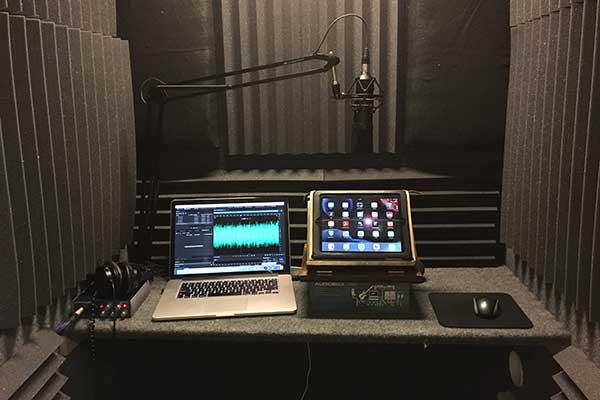 My recording booth is 4′ wide by 5′ long. It has fans on the outside that circulate air through the small room. You can see the exhaust port on the lower right side of the image. I read the manuscript on an iPad. This way there are no page turns to edit out later.

Many audiobooks are produced with a single narrator. A lot of narrators don’t change their voice much when reading dialogue between characters. The rule of thumb is to make sure the listener knows who’s talking. I have produced a number of audiobooks this way. But when DragonMan came along with its host of rich characters, I couldn’t help going the extra mile. I spent considerably more time on this book than I usually do, because I wanted to enhance the characters of the book with distinct voices. One character, in particular, required three voices because of his ability to morph himself into different forms.

This video demonstrates a few of the voices for DragonMan and shows how the voices were electronically manipulated for the final result:

The audiobook of DragonMan: The Adventures of Luke Starr is available for download from Audible and iTunes.

Synopsis of DragonMan: The Adventures of Luke Starr

Is he friend? Or is he foe? No one knows for sure. What they do know, however, is that as a friend there is no one better. Teenager Luke Starr appears to be living a rather dull, uneventful life in Milwaukee, Wisconsin. That is until fate and a nameless, faceless, mysterious dark force from a different plane of existence catapults Luke into a series of wondrous adventures; adventures that will change his life and those around him forever.

A fantasy adventure filled with wizardry and mystery that carries you away on the wings of magic to bewitching lands, where goblins dwell, wizards rule and witches still cast their evil spells. The story unfolds quickly with an air of impending danger as a likable young teenage hero, Luke Starr, enters a mysterious realm of Earth known as the mythical world of Spellville.

After his friends mysteriously disappear, Luke unwittingly follows them to this strange new world by way of an eerie portal. When Luke realizes that his friends are being held captive, he goes in search of them, determined to free them and take them back to earth.

The journey for Luke is not so much a mission of mercy as one of self-discovery. Despite his humble Midwest origins, Luke is no ordinary teenager. Imbued with superpowers following a ritualistic exchange of blood with a clever dragon, Luke soon discovers the awesome legacy of his birthright – a dark side of great strength and brutal fury – and must learn to accept the fact that he is known in this other world as The Chosen One.

Still, unquestionably human, he must come to grips with what he has now become: The most violent force in nature – a dragon hybrid who becomes known as, “DragonMan.” Ready or not, he is thrust into a nightmarish life and death battle to save planet Earth from alien beings hell-bent on destruction, while grappling with his own fears and doubts. Luke must learn to balance the violent nature of the dragon with his strong moral beliefs, and keep his dragon side in check.

In an unremitting pace that never lags, Luke and an ancient dragon must now join together in an epic struggle to prevent an alien attack on earth. The story is stitched together with an intriguing cast of characters, both good and evil, and not exactly as they seem, and the action keeps rolling until the climactic conclusion.

The book was written for the 7 to 13 age group but is also widely enjoyed by adults.

Lazaris wrote the first book of the series, DragonMan: The Adventures of Luke Star,17 years ago in during 9/11. He was just starting out as a writer. The movie version of the story is currently in production. “The screenplay took me years to write and in my opinion better than the book itself,” Lazaris said.

Lazaris has written screenplays for 7 of the books. The series has been optioned by ThunderBall Films. Lazaris is also a producer on the series.

In addition to the screenplays, Lazaris has written two songs for the upcoming movies. One song, Dark Side of Heaven, has two versions: An orchestral version for the opening titles and a rock version for the end of the first movie. The second song, In that Gentle Moment, was written for the fourth movie (the fourth book in the series) and is about the death of Luke Starr’s love interest, Tera.

Ted had to overcome a learning disability in order to create the world of the Luke Starr series. He has had a lifelong struggle with dyslexia. “I have always struggled with the problem,” Ted said. “In school, it was always terribly difficult for me to read what was right in front of me. And reading, writing, and spelling still to this day remain difficult for me. One thing I’ve learned despite having this learning disability, I can accomplish my goals, if I don’t, get overwhelmed by the big picture.”

Dan Curtis is a voice over artist, musician and entrepreneur. In addition to his artistic pursuits, he also builds and maintains a handful of websites. He has undergraduate degrees in audio engineering and music business and a master’s degree in Internet Marketing.

Available on iTunes and Audible