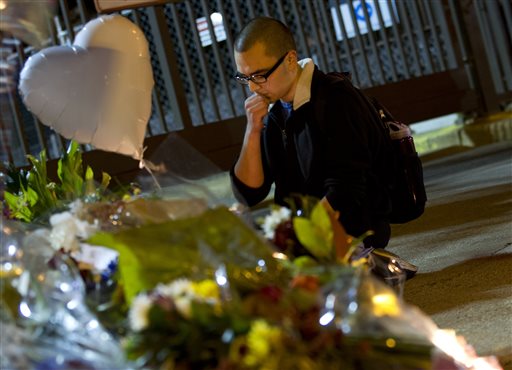 A person pauses after placing flowers outside the gates of the French Embassy in Washington, Saturday, Nov. 14, 2015, following deadly attacks in Paris on Friday. (AP Photo/Jose Luis Magana)

NEW YORK (AP) — Times Square, French consulates and sports stadiums saw increased security Saturday, but authorities noted the stepped-up patrols were out of an abundance of caution following the Paris terror attacks that killed more than 120.

Consulates in New York and Boston received extra security along with French-owned sites in Washington. But elsewhere, like Minnesota’s Mall of America, it was business as usual.

“I think like all New Yorkers, we feel solidarity, we know how this feels; it hits home personally,” said Ronnie De La Cruz, who was born in Paris, but has lived in the United States since the 1960s. After leaving a floral tribute at the French Consulate on Fifth Avenue, across from Central Park, he shrugged off any concerns about security.

“I think that certainly here in New York is probably about as best as it can be,” he said.

Sports venues were mindful of security in response to the attacks, which included suicide bombings outside the Stade de France during a soccer match between France and Germany.

Guards at the Naval Academy’s game against Southern Methodist randomly selected people to screen with metal detectors and fans were asked to unzip their coats before entering Navy-Marine Corps Memorial Stadium. Police in Los Angeles said they would beef up patrols for UCLA’s game against Washington State at Rose Bowl Stadium and at a cricket match at Dodger Stadium.

The NFL said it had been in contact with the Department of Homeland Security and the FBI and planned increased security inside and outside stadiums on Sunday. League officials discouraged fans from bringing bags.

Rep. Adam Schiff, D-Calif., the ranking member of the House Permanent Select Committee on Intelligence, told The Associated Press on Saturday that there continued to be no evidence of any specific and credible threat targeting the American homeland.

A U.S. official briefed by the Justice Department said intelligence officials, however, have detected increased chatter encouraging an attack on the U.S.

The official was not authorized to discuss the briefing publicly and spoke to The Associated Press on condition of anonymity.

But the official’s comments about current credible threats mirrored Schiff’s comments: There are none.

New York Gov. Andrew Cuomo said the State Police, National Guard and other agencies were on a heightened state of alert. The New York Police Department deployed its “Critical Response Command” — officers equipped with heavy weapons and other tactical equipment — to important locations including transportation hubs and the Broadway theater district. Officers with radiation detectors and bomb-detecting equipment were sent to subway stations and were randomly conducting bag checks.

“This is not the kind of thing that is a wakeup call to New York City,” John Miller, the department’s deputy commissioner for intelligence and counterterrorism, said of the Paris attacks during a news conference Saturday afternoon. “We’ve been awake about this for a long time.”

In Washington, D.C., additional law enforcement officers were deployed to French-owned sites and other high-profile locations out of “an abundance of caution,” said police spokesman Officer Sean Hickman. In Boston, the Massachusetts State Police said there was “a comprehensive and multi-layered security package” in place at Logan International Airport and enhanced patrols near the State House.

There was no visible security increase at downtown Chicago’s major transportation and tourist hubs, though police Superintendent Garry McCarthy said the police department was actively monitoring events in Paris and keeping in contact with federal law enforcement partners.

In Minnesota, a Bloomington police official said there were no plans to increase security at the Mall of America, which sees some 40 million visitors each year. In February, a video purportedly made by al-Qaida-linked rebels urged Muslims to attack shopping malls and specifically mentioned the Mall of America. Authorities said at the time there was “no credible” evidence suggesting such an attack was in the works.

Los Angeles police said there were no known threats against the city, but the department beefed up patrols at what it called critical sites, including a Snoop Dogg concert.

Police didn’t say if additional officers would be on hand at the Motion Picture Academy’s annual Governors Awards on Saturday night, but noted it was the type of event that would typically get extra attention from police and private security details.

“It’s just a reminder when out there doing our common routine stuff there’s always this element lurking,” said Sgt. Mark Cohan. “It’s the unknown factor. That could be anything with police work, but particularly with terrorism.”