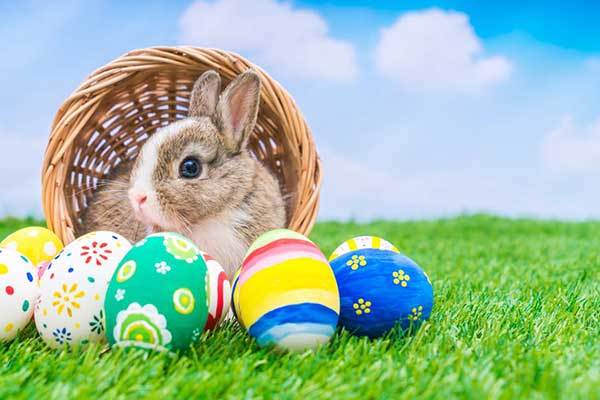 This weekend is Easter. For Christians it is a religious holiday, celebrating Jesus’ triumph over death. Others may simply be celebrating the rites of spring, and children will be looking forward to the Easter Bunny.

So how did chocolate rabbits, Easter baskets and colorful eggs works their way into traditions of Easter? It’s possible that the name, Easter, is derived from the pagan goddess of spring and fertility, Eostre. According to folklore, Eostre found a bird dying from the cold and turned it into a rabbit so its fur would keep it warm. Since the rabbit was really a bird, it continued to lay eggs. In one version of the story the bird, after being converted into a rabbit, painted some of its eggs and gave them to Eostre as a token of love, loyalty and appreciation.

Dyeing Easter Eggs different colors seems to have an apocryphal connection to Christianity. One tradition suggests that Mary Magdalene, the first person to see the resurrected savior was holding an egg in the presence of a ruler who proclaimed that Jesus rising from the dead was as likely as an egg turning red. According to the folklore, the egg Mary was holding turned red as the ruler spoke these words.

The tradition of Easter eggs may have come out of the tradition of Lent. Lent is a period of 40 days which begins on Ash Wednesday and ends on Holy Saturday, the day before Easter Sunday. The forty days represents the time Jesus spent in the wilderness preparing for his ministry. While current Lenten practices have evolved and adapted to modern circumstances, Christians have historically prepared themselves spiritually during this 40-day period by abstaining from ordinary dietary items such as meat, eggs and milk. Anne Kathryn, author of, “An Inner Journey to Easter,” says, “For many years, Easter was known in Western Europe as Egg Sunday, for eating eggs on that day was one of its joys.”

The tradition of chocolate eggs began in Germany and France in the 1800s and soon spread across Europe and eventually to the United States. In order to receive their candy eggs, children were told to make nests from hats or baskets for the Easter Bunny to leave the eggs in. Over time, this tradition has evolved into the current practice of using Easter baskets for the Easter Bunny to leave treats and toys.

Lamb is a traditional Easter food because it is part of the Passover meal that Jesus and his disciples ate at the last supper. Ham is an equally, if not more popular Easter food. The traditional of lamb is easy to trace. The other traditional Easter food, ham, is a little more obscure. It appears that the tradition of an Easter ham also traces its beginnings back to Eostre. History evidence traces the tradition back to 6th century Germany. Hunters would slay wild hogs in the forest in the fall and let them cure all winter. By spring, pork was often the only meat available for spring celebrations.

So why did so many Pagan traditions find their way into the Christian celebration of Easter? It’s likely that children played a role in incorporating the fun traditions of Easter into the holiday. Life and death are serious topics. Perhaps it started as a way to share these big issues in age-appropriate ways, using lighthearted symbols of animals and eggs.