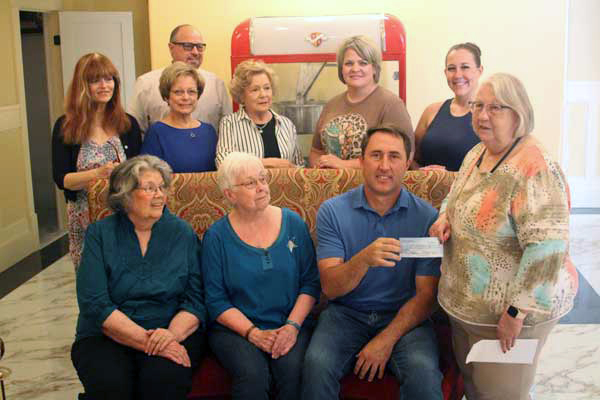 SAFFORD — The effort to restore the Safford Theatre to its former glory received a big boost from The Order of the Eastern Star, Arcadia Chapter no. 9.

The local Eastern Star chapter donated $25,000 to the Safford Downtown Association for the theater’s restoration.

During June, the local Eastern Star chapter has donated more than $100,000 to worthy recipients in the Gila Valley, including $75,000 to the Mt. Graham Regional Medical Center Foundation, and $50,000 for scholarships to Eastern Arizona College.

“We received a wonderful inheritance, and rather than let it sit, we want to do some good with it,” said Eastern Star Arcadia Chapter’s Molly Carlin, who added that this donation has a special meaning for her, as she worked at the theater in her younger days.

“I have a lot of ties to this theater, and I would like to see it open again,” she said.

With the help of the United Way of Graham and Greenlee Counties, the Freeport-McMoRan Foundation and the USDA, the Safford Downtown Association has been working on restoring and re-opening the theater as an open-air facility available to the public for rental, as well as a venue for community events and film showings.

Supply chain issues have slowed the restoration’s progress, but last April, the restored lobby was the home for the inaugural Gila Valley Film Festival, and for the last three years it has hosted the Best of Safford Awards presentation.

“Thank you. I hope to have you all back for a red-carpet premiere someday,” Safford Downtown Association President Danny Smith told the Eastern Star members.

Editor’s note: Reporter David Bell is a member of the Safford Downtown Association board.