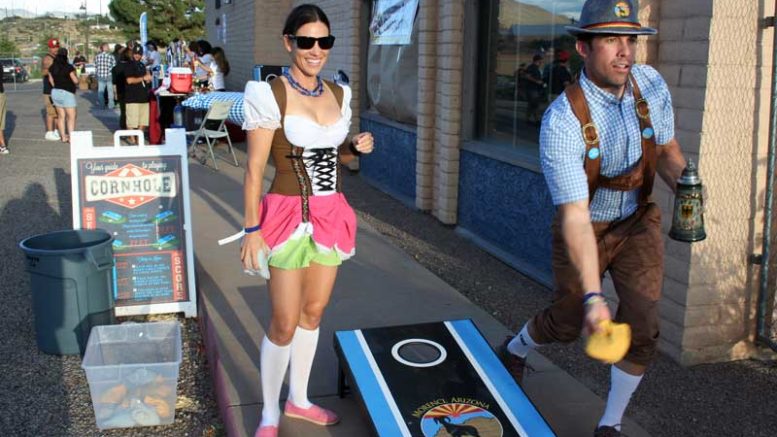 It was what it was supposed to be. There was good food, good beer, a good band and a large crowd in a very festive mood. It was the inaugural Oktoberfest held Saturday, Sept. 23 at the Morenci Motel.

The motel parking lot facing Burro Alley was eventually packed by a crowd estimated at 250. The constants, besides the music, food, and beer, were not only the cheerful atmosphere but also perfect weather. An occasional cool breeze blew that enhanced the atmosphere of the event 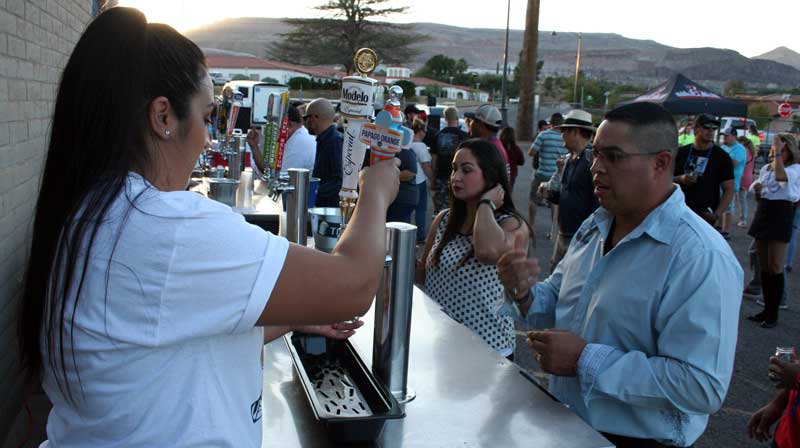 Photo by Gualterio Casias: It was quite the thirsty crowd at the inaugural Morenci Oktoberfest celebration Sept. 23. There was plenty of beer for celebrants to quench their thirsts, especially after enjoying a turkey leg or a giant pretzel. About 250 people celebrated Oktoberfest during the afternoon and night.

He pointed out that the Morenci Community Center holds many activities that focus on families and youths, but Oktoberfest was specifically held for adults.

Richardson said he hopes the celebration in Morenci will continue well into the future. 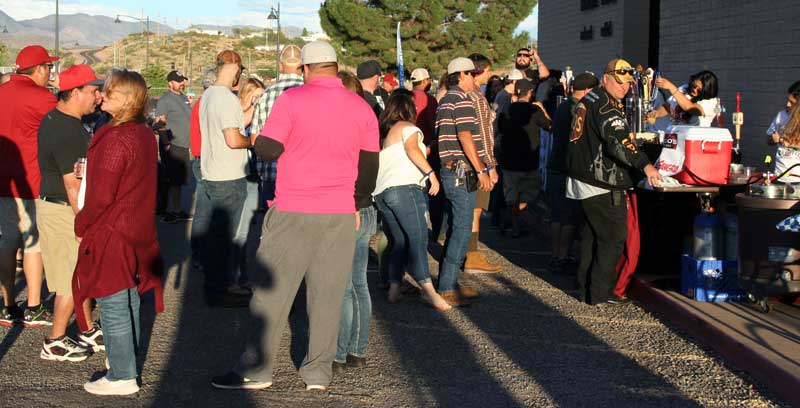 An Oktoberfest was held in Morenci’s DeGrazia Park about four years ago. It included all of the traditional food and what is often referred to as an “oompah band.” The ensemble included a tuba and other brass instruments typically found in such bands.

However, the oompahs have been replaced by other types of live music in Oktoberfests across the U.S. Such was the case at Saturday’s celebration. The Safford-based band PBnH played a wide variety of music, from pop to western and other popular pieces. People loved it.

The band, consisting of Paul Badger, Jace Hughes, Matt Player and Nate Veruske began playing as sunset approached. The sky was still blue, but fading and scattered clouds hovered overhead and the tall pine tree in the background at the Gila Health Resources medical clinic made for a quiet scenic setting. Traffic on Burro Alley was very light, meaning there was almost no vehicle noise to interfere with the music or conversations. 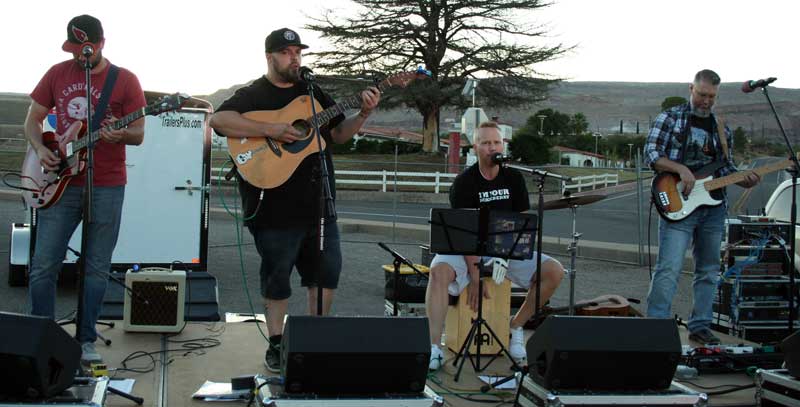 Photo By Gualterio Casias: The PBnH Band was quite popular with the large crowd at the Sept. 23 Oktoberfest in Morenci. The setting sun helped to set the stage for the band, which played a wide variety of tunes that please the crowd of about 250. Band members are, not necessarily in order, Paul Badger, Jace Hughes, Matt Player and Nate Verusk.

There were 15 tables, each with seating for about 10 people, at which many celebrants kicked back and enjoyed a mug of beer or a can of soda pop and visiting with friends and neighbors. Some, such as Richardson, brought their own steins, a large, decorated container traditionally found in Oktoberfests. 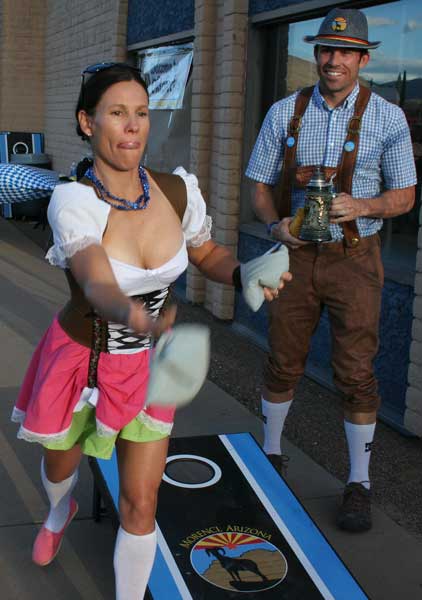 Photo By Gualterio Casias: Michele Richardson tosses a bean bag as she tries to score a hit in the “cornhole” game at the Sept. 23 Oktoberfest celebration at the Morenci Motel. Husband Steve Richardson looks on as he awaits his turn at the game.

The celebration included games like “Cornhole.” The object was to toss a beanbag into a hole on a slanted broad wooden surface. Richardson laughed as he said, “It’s not as easy as you might think. It really isn’t.” He and wife Michele made several tries but were not quite able to hit their target. The many others who tried their hand had little if any more, success than the Richardsons.

As the sun began sinking behind the Petahaya Mountains around Morenci, the sky started turning purple, yellow and red. Some stood in awe of the approaching sunset. Richardson commented, “How can you beat this? A beautiful day, people having a lot of fun and the sun setting so beautifully.”

The food was fairly traditional as turkey legs and large pretzels. Traditional split-roasted chickens and sausages are among the foods most-often served at large and long-standing Oktoberfests, such as those held in Wisconsin, which reportedly held the first Oktoberfest in the U.S. in 1961.

So what! The Morenci Oktoberfest crowd appeared very satisfied with the turkey legs and pretzels. Add to that the beer. While American-brewed beer was served and heavier German-brewed suds, such as Beck’s or St. Pauli Girl, were not on hand, no one complained.

One celebrant said it did not bother him as he is used to drinking American brews and what was offered was “mighty fine” with him. He added, “All I know was the beer was cold and tasted real good and it went down smooth, especially after having one of them big pretzels.”

Ah, yes, the evening brought on more laughter and gaiety. It was quite evident that the Morenci Oktoberfest was very much a success.

Some have thought Oktoberfest began as a celebration of the fall harvest. Not so. It began Oct. 12, 1810, to celebrate the wedding of Bavarian Crown Prince Ludwig to Princess Therese to Saxony. The citizens of Munich, Germany, were all invited to festivities held on the fields outside of the city walls to celebrate the happy royal event.

Today, Oktoberfest is a 16-day event in Munich that attracts more than 16 million people from all over the world. As many as 1.5 million gallons of beer are downed, 200,000 sausages and 480,000 spit-roasted chickens (Hendl) consumed. 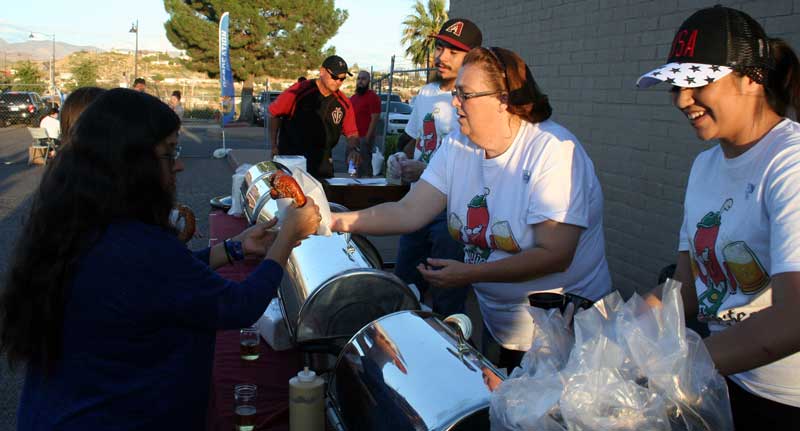 Photo By Gualterio Casias: A celebrant receives a turkey leg during the first annual Morenci Oktoberfest held at the Morenci Motel parking lot.

Oktoberfest began gaining ground in the U.S., particularly so in states such as Wisconsin, that have large populations of people of German ancestry. Oktoberfest has become highly popular in many other countries, including Canada, which has one of the largest Oktoberfest celebrations outside of Germany

The Richardsons each wore traditional Oktoberfest outfits as did at least one other couple. A woman celebrant said she is seriously considering wearing Oktoberfest clothing so she plans to ask the Richardson how they went about obtaining theirs. “I guess I’ll have to buy my outfit at a store. Then again I have a couple of friends that are really good at making clothes, so I might hit them up, too.”

She added, “My husband and I are having so much fun you can bet we’re already looking forward to next year.”