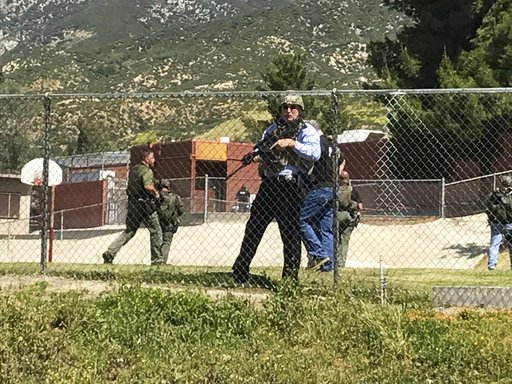 Investigators believe “the suspect is down” and there is no further threat to North Park School, Police Chief Jarrod Burguan said on Twitter.

“We believe the teacher knew who the shooter was,” she said.

She said all other students were safe and they were being taken to a local college campus. Aerial footage showed students gathered on a field and a blacktop basketball court inside the fenced-in grounds of the campus as school buses lined up. 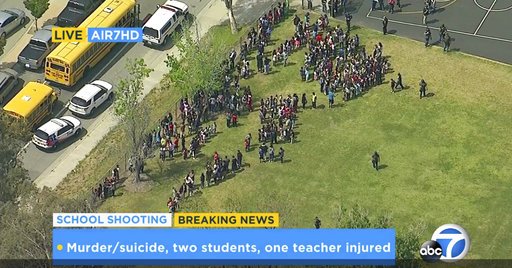 In this frame from video provided by KABC-TV, faculty and students evacuate North Park School Elementary School as emergency personnel respond to a shooting inside on Monday, April 10, 2017, in San Bernardino, Calif. (KABC-TV via AP)

Frantic parents ran up a sidewalk looking for information about their children but were not able to learn immediately what happened at the school. Several parents interviewed on TV said their children were too young to carry mobile phones, so they had not been able to contact them to see if they were safe.

The city of 216,000 was the site of the December 2015 terror attack that killed 14 people and wounded 22 others at a meeting of San Bernardino County employees. Husband-and-wife shooters Syed Rizwan Farook and Tashfeen Malik were killed in a gunbattle with authorities later that day.

The city is known for its high rates of violent crime, especially homicides, and has struggled to emerge from bankruptcy.