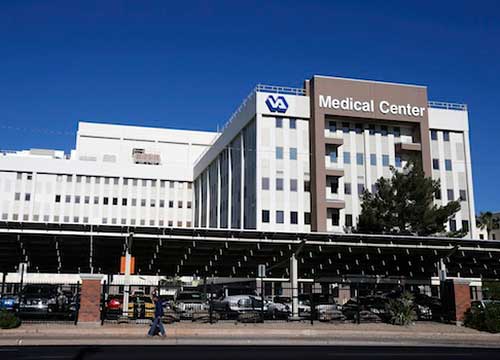 PHOENIX (AP) — Despite a new report raising serious questions about the quality of care within the Phoenix VA Health Care System, a top official in the U.S. Department of Veteran Affairs said Wednesday that significant progress has been made.

The report, which was released Tuesday, found Phoenix VA staff inappropriately canceled medical consults that possibly contributed to the death of one veteran who did not get a recommended stress test. Consults include appointments, lab tests, teleconferencing and other planned patient contacts.

“That is a situation we take very seriously,” Shulkin said.

Shulkin said the cancellations were not made by managers, but lower-level staff who were unclear about the proper way to cancel consults.

“That’s why we’ve invested in additional training, in additional auditing and additional clarification of our policies to make sure that everyone is clear on how to do this,” Shulkin said.

However, he said the report also showed how the Phoenix facilities have improved in the last two years such has more hiring, 70,000 square feet of additional space and “fast track” care for the emergency room.

“We’ve seen our consults and our wait times come down significantly. And most important, we’ve seen our patient satisfaction — what veterans are saying about their care and their access to care in Phoenix — rise significantly from 66 percent into the mid-70s,” Shulkin said.

Yet, the report states there were 38,000 open consults at the Phoenix VA as of last July. The Phoenix system enrolls about 85,000 veterans

Nearly 730 employees have been hired at the Phoenix system since it became the center of a national scandal in April 2014, according to Shulkin. Veterans Affairs internal investigations identified 35 veterans who died while awaiting care.

Earlier in the day, Shulkin and new director Rima Ann Nelson met with veterans groups as well as members of Arizona’s Congressional delegation, including Republican Sen. John McCain and Democratic Rep. Ann Kirkpatrick, who is challenging McCain in the November election.

McCain, in a statement, expressed continued skepticism of Nelson. She previously was the director of the VA Regional Office in Manila, Philippines and the medical center director for the St. Louis VA Health Care System, where she faced accusations of mismanagement.

“As ground-zero of the scandal in veterans’ health care, the Phoenix VA clearly has a long way to go to fully reform,” McCain said. “It is unacceptable that Ms. Nelson is the seventh director in three years — no organization can operate efficiently with such a high turnover rate.”

In contrast, Kirkpatrick said she left the meeting feeling hopeful.

“The meeting was productive and included an in-depth introduction to the Phoenix VA’s new leadership,” Kirkpatrick said in a statement. “I have expressed my repeated concerns about the many ways the Phoenix VA is failing our veterans — these are troubling, systemic problems that too often start at the top.”

Shulkin praised Nelson as a leader who knows how to make decisions and acts on behalf of veterans, calling her part of the solution.