SAFFORD – A Safford Police officer discharged his weapon at a charging dog Feb. 25, after the owner, who was later arrested for disorderly conduct/domestic violence, refused to put his vicious animal back in his house.

Officers were dispatched to a residence in the 1200 block of 8th Avenue at about 12:07 a.m. regarding a welfare check on a possibly intoxicated man who had hit his head. 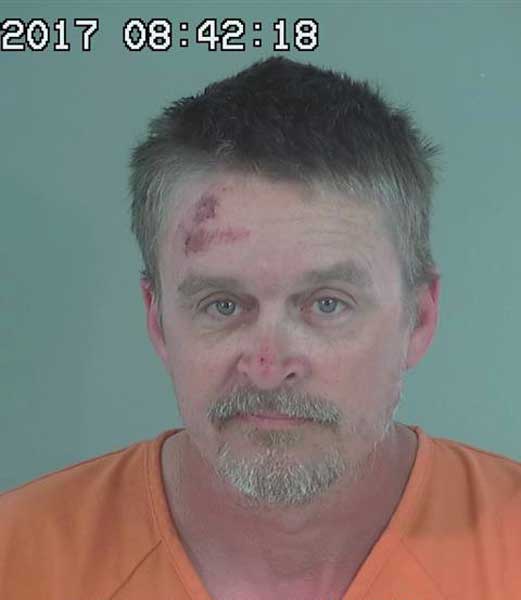 Upon arrival, the first officer heard arguing with a female crying and saw a young girl in a back room that appeared upset. The officer knocked on the door and reported seeing Victor Huffman, “stagger” toward the door and attempt to remove a handgun from a holster on a television stand. The officer identified himself and Huffman left the gun in the holster and instead answered the door with two growling dogs that began to bark at the officer. Huffman then exited the residence with one of the dogs and refused to put the dog back inside, according to a Safford Police report.

The officer advised the dog could be shot if it attacked and Huffman became increasingly agitated, according to the report, and said the dog was just doing what it was trained to do and that Huffman would shoot the police officer if he shot his dog.

At that point, another officer arrived at the scene and turned his attention to the second officer, who repeatedly yelled at the dog to get back. That officer reported the dog then charged at him and attempted to bite his right knee. He then deemed the dog a danger to himself and the public, drew his weapon and fired one shot at the canine. The round missed and went into the dirt but was enough to scare the dog away. An attempt to recover the bullet was fruitless, but the officer picked up the spent shell casing as evidence. Nobody or any animal was injured during the shooting.

After the ruckus was over, Huffman was taken into custody and his wife and 10-year-old daughter were interviewed as victims. The victims said Huffman had became increasingly intoxicated and began to yell at them and call them names, such as fat (expletive deleted) and whores.

After paramedics from Lifeline Ambulance medially cleared Huffman for his head wound he suffered when he fell prior to police arrival, Huffman was arrested and booked into the jail on a charge of disorderly conduct/domestic violence.