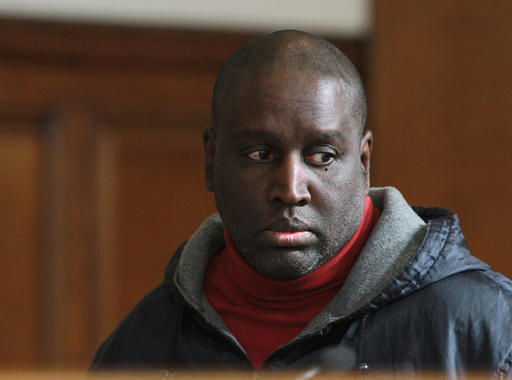 FILE - In this Nov. 13, 2015 file photo, Darius McCollum is arraigned in Brooklyn criminal court in New York. New York City transit officials say they will try to recoup any money made by the notorious transit impostor from a feature film in development about him. McCollum, who first commandeered a train at age 15, has been arrested 30 times over the years for transit-related crimes. (Jesse Ward/The Daily News via AP, Pool, File)

NEW YORK (AP) — To Hollywood, a transit impostor with a long history of posing as a New York City subway worker driving trains is rich material for a movie. But to transit officials, Darius McCollum is a criminal who shouldn’t profit off his behavior.

The Metropolitan Transportation Authority said Monday that it will use the state’s Son of Sam law to try to recoup any money he makes off a feature film in development about his life.

McCollum, who’s been arrested 30 times for transit-related crimes, told The Associated Press that his uncontrollable obsession with buses and trains is because of an autism-spectrum disorder and he needs help. He was most recently arrested in November, when he was accused of stealing a Greyhound bus from a terminal in New Jersey and driving it to Brooklyn.

McCollum, now 50, had the subway map memorized by age 8. He befriended engineers and pilots and first started hanging around the subway as a child — he knows every subway line, every stop. After the Sept. 11 attacks, he was asked by the MTA to help fortify their system, his lawyer said. He wanted to work for the MTA, but transit officials have long said they would not hire someone who had stolen a train, as he did at 15 from Penn Station to the World Trade Center.

“The MTA created this problem because they were lazy and glad to have him do their work,” said McCollum’s attorney, Sally Butler. “They also aren’t involved in this case. I will fight this.”

McCollum’s story has been in newspapers and magazines for decades. A documentary about his life, “Off the Rails,” will premiere April 7 at the Full Frame festival in Durham, North Carolina. The feature film, tentatively titled “Train Man,” was sold to a financer and is set to star Julia Roberts as Butler, who has been McCollum’s attorney since his 2010 arrest in Queens for stealing a Trailways bus.

He hasn’t seen any money yet from the producers, Butler said. Any money would likely come if the film makes it to production.

“And if he gets any, he should be able to keep it,” she said. “This is not your usual guy in jail. He’s a special case.”

The state’s Son of Sam law originated after rumors that publishers and movie studios were offering large amounts of money to David Berkowitz for his story, and it was ruled unconstitutional by the U.S. Supreme Court in 1991 during a battle over the mobster tale “Wiseguy.” The struck-down law was replaced in 2005.

In a Brooklyn court Monday, McCollum rejected a plea deal that would have sent him to prison for up to 10 years. He’s pleaded in every other criminal case against him. Butler is still trying to get McCollum into the borough’s mental health court, where he’d receive treatment and have to adhere to a strict protocol or face stricter sentences. The district attorney’s office initially said it would not allow the move but then backed off in court. A decision was expected April 11.

If not, McCollum may be headed for trial — his first ever.