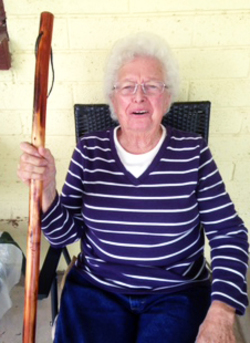 Norma M. Howard, a long-time resident of Pima, passed away peacefully on Tuesday the 15th of December, 2015 surrounded by her loving family. Norma was born March 21, 1930 in Douglas, AZ to Martin Emil & Annie Coons Mortenson.

Norma received a Bachelor of Science Degree in Business from Gila Junior College in 1952. That same year, she married Seaborn Von Howard, traveling the world with him during his Air Force career, eventually settling down in the Gila Valley in 1970 where they raised 3 daughters.

Norma loved good food, family and friends. She took great pride in her home and could usually be found out in the yard with a tool in hand. She had a wonderful smile that could light up a room.

She is survived by her brother Raymond of Sierra Vista and her 3 daughters, Cindy of Westlake, LA Rita of Sacramento, CA and Donna of Honolulu, HI and numerous nieces, nephews and “adopted” family, all of whom brought great joy to her later years.

Services are under the direction of McDougal’s Caldwell Funeral Chapel and Crematory.  Online condolences may be extended at www.caldwellfuneralchapel.com.