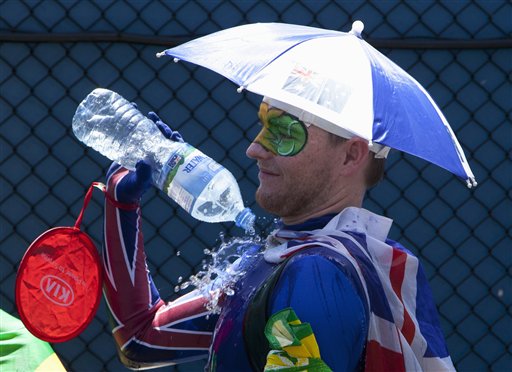 FILE - In this Jan. 16, 2014 file photo, a spectators pours water over himself to cool down as play was suspended when organizers implemented the Extreme Heat policy during second round matches at the Australian Open tennis championship in Melbourne, Australia. New scientific analysis shows the fingerprints of manmade climate change on 14 extreme weather events in 2014, hitting every continent but Antarctica. Dozens of scientists from the National Oceanic and Atmospheric Administration and across the world intricately examined 28 strange weather conditions last year to see if global warming partly increased their likelihood or their strength. In a 180-page peer-reviewed report, the scientists spotted some effects of climate change in half of them. (AP Photo/Joshua Baker, File)

Dozens of scientists from the National Oceanic and Atmospheric Administration and across the world examined 28 strange weather conditions last year to see if global warming partly increased their likelihood or their strength. In a series of papers in a 180-page, peer-reviewed report, the scientists spotted some effects of climate change in half of them.

Researchers found climate change fingerprints on Hawaii’s tropical cyclones and heat in Argentina, Europe, South Korea, China, and repeatedly in Australia. The studies also found global warming partly to blame for heavy rain and flooding in Canada and New Zealand, winter storms in Nepal and drought in Africa and the Middle East.

In the case of the California wildfires, they found that global warming has increased the likelihood of fires and should increase with time; the cause of the 2014 wildfire situation is a bit harder to assess.

In a record hot year, heat stood out. Hundreds of millions of people live in areas where 2014 extreme heat was linked to climate change.

One study looked at a giant swath of Europe and found it was unusually warm because of climate change. The study found 12 percent of the large area set warm records in 2014, but no records for cold were established.

The studies varied in how much influence climate change had on those events, but it was never the sole cause, scientists said.

“This series of papers makes it more clear than ever that human-caused climate change is increasing both the severity and frequency of an increasing variety of climate extremes,” said University of Arizona climate scientist Jonathan Overpeck, who wasn’t part of the report.

The researchers used statistical analysis and computer simulations to show what would happen without man-made warming and compare that to what did happen.

Scientists could not find a climate fingerprint on 13 events, including winter storms in the United States, heavy rain in England and France, tropical cyclone Gonzalo, the Singapore drought and an increase in Antarctica’s sea ice.

Climate change’s influence would make a cold snap such as the one that occurred in the U.S. upper Midwest 20 to 100 times less likely, but it happened anyway, Herring said.

Last year some people speculated that harsh cold winters had been influenced by climate change, but the scientists who looked at that just couldn’t find it, said NOAA climate scientist Martin Hoerling, a co-editor of the paper.

“All that is unusual is not necessarily happening due to climate change,” he said. “Some of these events are climate surprises.”

Kevin Trenberth, a senior scientist at the National Center for Atmospheric Research, said humans have changed Earth’s climate as a whole, so it is “seriously misguided” to ask if individual events are affected by humans.

Seth Borenstein can be followed at http://twitter.com/borenbears