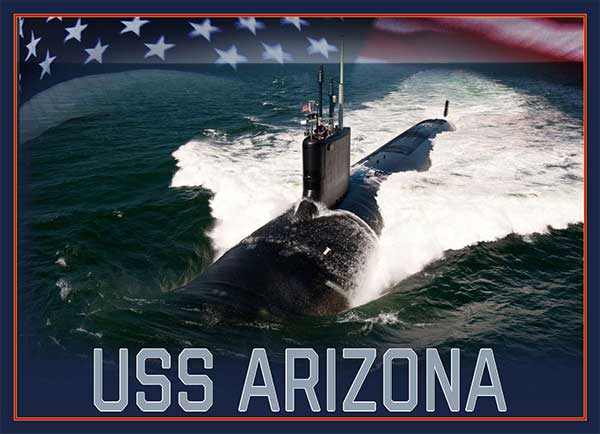 PHOENIX — Governor Doug Ducey today released the following statement after the announcement from Acting Navy Secretary Thomas Modly that a new warship will be given the name “USS Arizona.” No Navy ship has carried that name since the USS Arizona was sunk at Pearl Harbor on December 7, 1941.

“Today is a proud day for Arizona,” said Governor Ducey. “It’s been nearly 80 years since the attacks on Pearl Harbor, which resulted in the sinking of the USS Arizona and deaths of 1,177 of her crewmembers. This ship and the name, ‘USS Arizona,’ hold special meaning for our country, its history and the people of Arizona — and today, that legacy begins a new chapter. The commissioning of a new warship named Arizona honors our past—including those who have given their lives in service to our country—and our future and recognizes Arizona’s important contributions to our nation and its defense. Arizona thanks Acting Secretary Modly for this honor and we look forward to the official commissioning of the new USS Arizona.”

Built at the naval yard in Brooklyn, New York, the USS Arizona—one of two Pennsylvania-class battleships at the time—was commissioned on October 17, 1916, making it the largest ship in the navy’s fleet. The ship remained stateside during World War I and was among the ships that escorted the USS George Washington, which was transporting President Woodrow Wilson, to the Paris Peace Conference in 1919.

The USS Arizona was stationed at Pearl Harbor on December 7, 1941 and came under attack along with other navy vessels stationed there. At approximately 8:10 a.m., the ship was struck by a 1,760-pound projectile, causing munitions and fuels to ignite and creating a massive explosion that eventually sunk the ship. Only 334 crewmembers survived; 1,177 perished with the ship. It was among four battleships sunk during the attack.

Unlike other ships, the USS Arizona was deemed “unsalvageable” and remains at the bottom of Pearl Harbor. On May 30, 1962, the USS Arizona Memorial was officially dedicated. Today, the memorial is overseen by the National Park Service and receives more than 1.8 million visitors annually.