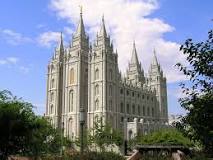 SALT LAKE CITY (AP) — Mormon church officials have issued a rule change that says members in same-sex marriages can be kicked out and their children must wait until they’re 18 and disavow homosexual relationships to be baptized.

The revisions triggered a wave of anger, confusion and sadness for a growing faction of LGBT-supportive Mormons who were buoyed in recent years by church leaders’ calls for more compassion and understanding for LGBT members.

“It feels like they are extending an olive branch and hitting you with it,” said Wendy Montgomery, who is Mormon and has a 17-year-old gay son. “It’s like this emotional whiplash.”

The Church of Jesus Christ of Latter-day Saints disseminated the handbook changes this week to local church leaders around the world. The goal was to provide clarity to lay leaders who run congregations, church spokesman Eric Hawkins said. He noted the church has long been on record as opposing same-sex marriages.

“While it respects the law of the land, and acknowledges the right of others to think and act differently, it does not perform or accept same-sex marriage within its membership,” Hawkins said in a statement.

Montgomery said Friday the news left her son sobbing and forced her and her husband to consider leaving a religion they’ve belonged to for generations. The couple has been trying desperately to stay in the church despite a harsh reception to their son coming out.

Montgomery also echoed a response shared by many on social media: She can somewhat understand the hard stance on same-sex marriage, but she can’t comprehend singling out gay couple’s children.

“We just put a scarlet letter on these kids,” Montgomery said. “This isn’t my church. I don’t see God in it. I don’t see divinity it. It just feels evil.”

Nathan Kitchen, a gay Mormon with five children, said the news left him devastated and angry about the quandary his children now face. The 47-year-old dentist was married to a woman for 18 years before a recent divorce.

“I am stunned right now at how I’m being labeled and how my children are being marked,” said Kitchen, of Gilbert, Arizona. “It’s almost like they now have to choose between a gay father and a church that they love.”

The changes come as other religious groups that oppose gay marriage struggle with how to approach the issue of same-sex spouses’ children.

The new rules stipulate that children of parents in gay or lesbian relationships — be it marriage or just living together — can no longer receive blessings as infants or be baptized around age 8. They can, however, be baptized and serve missions once they turn 18, but only if they disavow the practice of same-sex relationships; no longer live with gay parents; and get approval from their local leader and the highest leaders at church headquarters in Salt Lake City.

The church views these key milestones as acts that bind a person to the faith and as promises to follow its doctrine.

That fact wasn’t lost on Mormons interpreting the new rules.

“I am no better now than an illegal polygamist,” Kitchen said.

Scott Gordon, president of FairMormon, a volunteer organization that supports the church, said: “It certainly makes a statement about how they feel about it.”

Gordon said he understands why some find the changes jarring and consider them mean-spirited toward children. But, he believes they’re intended to protect gay couples and their children by allowing the kids to mature and make the difficult decision at 18 about whether to become fully invested in a religion that holds as a root tenet that their parents’ lifestyle is a sin.

“The idea of family is not just a peripheral issue in the Mormon church. It’s core doctrine. It’s a central idea that we can be sealed together as a family and live together eternally,” Gordon said. “That only works with heterosexual couples.”

The handbook revisions also for the first time list being in a same-sex relationship as an offense that can lead to being ousted from the religion. This is a category known as apostasy, which until now has been reserved primarily for people who practice polygamy, teach inaccurate doctrine or publicly defy guidance to church leaders.

Last month, two high-ranking church leaders delivered speeches that gave LGBT advocates hope that the faith was moving toward greater acceptance. The leaders reiterated the religion’s commitment to promoting families led by married heterosexual couples but also urged people not to shun those with opposing views.

That message of “fairness of all” appeared to distance the faith from the blowback that came when it was a major backer of California’s gay marriage ban in 2008.

Mormons appear to be slowly growing more accepting of homosexuality, albeit at rates that still put them among the least accepting among major religions, a new survey from the Pew Research Center shows.

In a survey done last year, 36 percent of Mormons said homosexuality should be accepted by society. That’s up from 24 percent in 2007, the last time Pew conducted its U.S. Religious Landscape Study.

Support for gay marriage is lower, with just 25 percent of Latter-day Saints approving such unions.

Kitchen is currently single but hopes to one day marry again, this time to a man. More pressing is how he’ll tell his five children, ages 11 to 23, about the new rules. It is his weekend with the kids, and as of Friday afternoon, he hadn’t decided how to address it.

In the past two years, they have learned their father is gay and endured their parents’ divorce.

“This is very bad position to put children in,” Kitchen said. “It will be devastating to them when they find this out.”