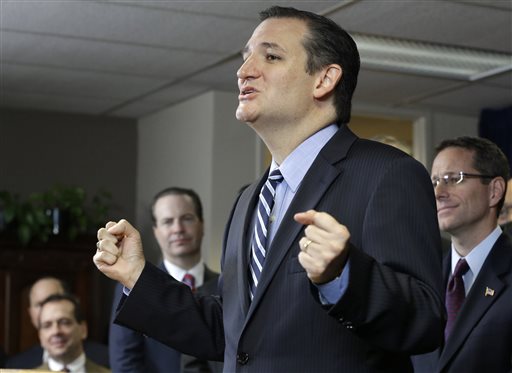 FILE - In this Thursday, Oct. 16, 2014 file photo, U.S. Sen. Ted Cruz, R-Texas, is surrounded by preachers as he addresses a crowd at a Houston church. Cruz spoke about a legal dispute involving several pastors fighting subpoenas from Houston city attorneys demanding they turn over copies of any sermons they delivered that relate to Houstons equal rights ordinance championed by the city's gay mayor, Annise Parker. The city later dropped the effort. (AP Photo/Pat Sullivan, File)

HOUSTON (AP) — After a drawn-out showdown between Houston’s popular lesbian mayor and a coalition of conservative pastors, voters in the nation’s fourth-largest city will soon decide whether to establish nondiscrimination protections for gay and transgender people.

Nationwide, there’s interest in the Nov. 3 referendum: Confrontations over the same issue are flaring in many places, at the state and local level, now that nondiscrimination has replaced same-sex marriage as the No. 1 priority for the LGBT-rights movement.

“The vote in Houston will carry national significance,” said Sarah Warbelow, legal director of the Human Rights Campaign, a national LGBT-rights group. She noted that Houston, with 2.2 million residents, is more populous than 15 states.

The contested Houston Equal Rights Ordinance is a broad measure that would consolidate existing bans on discrimination tied to race, sex, religion and other categories in employment, housing and public accommodations, and extend such protections to gays, lesbians, bisexuals and transgender people.

The outcome is considered uncertain. Two recent polls commissioned by Houston TV stations showed supporters of the ordinance with a slight lead, but each poll indicated that about one-fifth of likely voters were undecided.

Opponents contend the ordinance would infringe on their religious beliefs against homosexuality. Copying a tactic used elsewhere, they also have labeled it the “bathroom ordinance,” alleging that it would open the door for sexual predators to go into women’s restrooms.

“Even registered sex offenders could follow women or young girls into the bathroom,” says an ad produced by Campaign for Houston, which opposes the ordinance.

The measure’s supporters denounce these assertions as scare tactics, arguing that such problems with public bathrooms have been virtually nonexistent in the 17 states that have banned discrimination based on gender identity.

Mayor Annise Parker, whose election in 2009 made Houston the largest U.S. city with an openly gay mayor, is among those expressing exasperation.

“The fact there is so much misinformation and not just misinformation, just out and out ludicrous lies, is very frustrating,” Parker recently told reporters. “I’m worried about the image of Houston around the world as a tolerant, welcoming place if this goes down.”

Parker has vented some of her frustration on Twitter in tweets criticizing former Houston Astros player Lance Berkman. In ads for Campaign for Houston, Berkman said the ordinance would “allow troubled men who claim to be women to enter women’s bathrooms, showers and locker rooms.”

Parker, who is completing her third and final term, has encountered criticism herself. When opponents sued the city — seeking to force a referendum on the ordinance after the city council approved it in May 2014 — city attorneys tried to subpoena sermons from five pastors who opposed the measure. The pastors said the request violated their religious freedom, and the city later dropped the effort.

The lawsuit eventually reached the Texas Supreme Court, which in July ruled the conservative activists should have succeeded in their petition drive to put the issue before voters.

In a sermon last month, Ed Young, pastor of Second Baptist Church, one of the nation’s largest churches, called the ordinance “totally deceptive” and urged his congregation to vote against it because “it will carry our city … further down the road of being totally, in my opinion, secular and godless.”

Richard Carlbom, campaign manager for Houston Unites, which supports the ordinance, said the measure is not simply about anti-LGBT discrimination but about multiple forms of bias. Between May 2014 and September 2015, most discrimination complaints in the city related to race and gender; only about 5 percent involved LGBT discrimination.

Several national LGBT-rights groups have deployed staff in Houston to support the ordinance, including Freedom for All Americans. Its CEO, Matt McTighe, praised Houston’s cultural diversity, but said it was the only one of the 10 largest U.S. cities without LGBT non-discrimination protection.

For years, the top priority of the gay-rights movement in the U.S. was winning nationwide legalization of same-sex marriage. When that occurred via a Supreme Court ruling in June, there was broad agreement among activists that the next priority should be obtaining nondiscrimination protections in all 50 states.

At present, Texas is one of 28 states with no statewide protections, although many municipalities in those states have adopted local nondiscrimination policies. Of the other 22 states, 17 prohibit discrimination on the basis of sexual orientation and gender identity in employment, housing and public accommodations, and New York will soon join that group. Four states have less sweeping protections.

LGBT activists would like to replace this patchwork of laws with a comprehensive federal nondiscrimination law, and such a measure — the Equality Act — was introduced in July. But it’s given no chance of passage in the current Republican-controlled Congress; none of its more than 200 co-sponsors are from the GOP.

Faced with that reality, LGBT-rights supporters are waging a state-by-state, city-by-city campaign to extend anti-bias protections.

“We’re now at a moment where we’re having conversations with more conservative parts of the country — it’s not easy,” said Sarah Warbelow. “These are educational efforts — bringing people along on what it means to provide protections for the LGBT community and helping people understand that the sky doesn’t fall when you do that.”

At the state level, activists consider Pennsylvania the most likely to join in establishing statewide protections.

LGBT nondiscrimination has been on the Pennsylvania legislature’s agenda for more than a decade but there’s never been a floor vote, largely due to Republican opposition. Now there’s growing GOP support for the latest measure, introduced in August, and supporters believe it will prevail if skeptics can be assured it won’t erode religious liberties.

“I’m confident that if this bill is given a vote in the Senate and House, it will pass,” said state Sen. Pat Browne, a lead Republican sponsor. “The people we represent believe this is something we should do.”

In Indiana, prospects are unclear for a Democratic plan — backed by many major corporations — to push for statewide LGBT protections. The topic has been divisive since the spring, when Republican Gov. Mike Pence and the GOP-controlled Legislature incurred a backlash for a religious objections law that critics said would allow businesses to discriminate against LGBT people.

In the absence of a statewide law, several smaller Indiana cities — including Pence’s hometown of Columbus — recently joined Indianapolis and Bloomington in adopting local LGBT protections. Similar efforts failed in the cities of Goshen and Elkhart.

There’s been action recently in several other states. In September, Fayetteville became the fifth Arkansas municipality to pass an LGBT nondiscrimination ordinance in defiance of a new state law aimed at prohibiting such local protections. In Alaska’s largest city, the governing assembly of Anchorage passed an ordinance Sept. 29 by a 9-2 vote. In Arizona, an ordinance was approved in Sedona.

Other cities across the U.S. will be watching Houston on Nov. 3, said James Douglas, a supporter of the ordinance who is president of Houston’s NAACP chapter.

“All those cities that are smaller than us are looking to us because they want to be like us,” Douglas said. “And we want to give them a perfect example of what a major, diverse city ought to look like.”