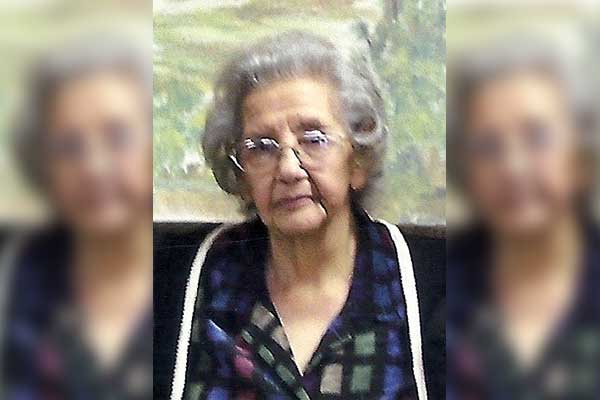 Natalia Rodela Peralta was called home by Our Lord on August 16, 2018. Natalia was born in Morenci, Arizona on February 7, 1928 to Casimiro and Cuca Rodela. She was the 7thchild of a family of 12 children. Her brothers and sisters were Lupe, Maggie, Fred, Casey, Tony, Sulema, Alex, Ida, Robert, Angie and Alby.

Natalia grew up in her beloved Longfellow as a child and attended school in Morenci. She loved playing with her siblings and the neighborhood kids and has shared many stories of the memories and fun that they had. She graduated from Morenci High School in 1948 and went to work at the Morenci Hospital in 1949.

She met a very handsome man and fell in love with Roy Archer and they eloped to Lordsburg, New Mexico on New Year’s Eve of 1949. They had two children Martha Lee and Roy Archer III. They were married for 18 years.

Natalia then met another wonderful man and married Jesus (Chuey) Peralta on June 28, 1969. They made their home in Morenci and then moved to Safford in 1974. Since their move to Safford she wanted to do what she loved and went to work at the Mount Graham Hospital where she worked for twenty years until she retired. She had a total of 30 years working in both the Morenci and Safford hospitals.

She and Chuey built a beautiful home in San Jose where she lived happily next to her Mother and Father. Natalia loved being with her family, cooking for them and was famous at the Safford Hospital for her green chili. She also liked telling stories of old Morenci, watching the Phoenix Suns, playing cards, camping and traveling.

She is survived by her daughter Martha (Silver) Rivera and her son Roy (Toni) Archer, her stepsons Angel (Mary Lou) Peralta, Joe (Alice) Peralta and stepdaughter Rosalie (John) Hodges. She was blessed with 8 grandchildren, 19 great grandchildren and 6 great-great grandchildren.

She is preceded in death by her husband Chuey Peralta, her parents Casimiro and Cuca Rodela, her brothers Lupe, Fred, Casey, Tony, Alex, her sisters Maggie Tellez and Sulema Williams and grandson Silver Glenn Rivera.

A visitation will be held Friday, August 24, 2018 at 8:00 a.m. at the St. Rose of Lima Church with the Rosary being led at 9:00 followed by the Mass of Christian Burial at 10:00 with Father Nicodemus Shaghel as Celebrant. Interment will be in the Safford Cemetery following services.