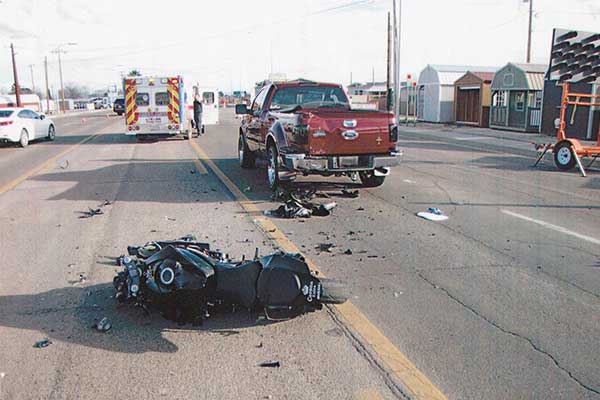 SAFFORD – Just before 4:00 pm last Tuesday, an officer was dispatched to the 700 block area of Highway 70 where a truck and motorcycle had collided in the eastbound lane, closest to the turn lane. The officer found the driver of the motorcycle laying face down on the pavement with his eyes open and attempting to speak but he was unable to speak correctly. The officer assured the man that an ambulance was on its way.

After medical staff arrived, the man was transported to the Mt. Graham Regional Medical Center for further treatment. Meanwhile, as other officers arrived and spoke with several witnesses, it was reported that the driver of the truck was heading eastbound in the lane closest to the turning lane. Another vehicle was in the lane to the right where cones were indicating the lane would be ending. The truck tried slowing down to let the other vehicle merge in, which was reportedly taking a long time to merge over. When the truck slowed down the motorcycle behind the truck was unable to stop and struck the back of the truck.

Authorities could see a single skid mark located behind the truck that was about 4 feet long and about 4 feet from the back of the truck. The motorcycle was towed and the roadway was cleared. An officer drove to the Emergency Room and attempted to speak with the driver of the motorcycle. The driver stated he did not remember anything prior to the collision. The man was considered at fault and cited with Failure to Control, as well as not having insurance on the motorcycle.