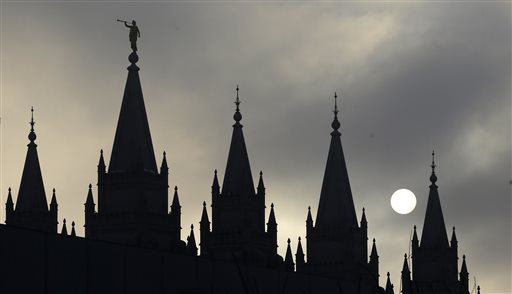 FILE - In this Feb. 6, 2013, file photo, the angel Moroni statue, silhouetted against a cloud-covered sky, sits atop the Salt Lake Temple, at Temple Square, in Salt Lake City. A new Mormon church policy targeting gay members and their children has triggered a firestorm of backlash from church members of all political backgrounds. The new rules bar children living with gay parents from being baptized until they're 18. After that, they can be baptized only if they disavow same-sex relationships. The rules also make gay marriages a sin worthy of expulsion. (AP Photo/Rick Bowmer, File)

SALT LAKE CITY (AP) — The Mormon church is standing behind its new rules targeting gay members and their children that generated widespread blowback from members, while providing more explanation about the policy changes and clarifying exactly what they mean.

The rules issued last week are designed to protect kids, following in the footsteps of Jesus Christ’s “tender love of children,” officials with The Church of Jesus Christ of Latter-day Saints said in a news release Friday.

“Church leaders want to avoid putting little children in a potential tug-of-war between same-sex couples at home and teachings and activities at church,” according to the release posted online.

The rules ban baptisms for children living with gay parents until they turn 18, disavow same-sex relationships and get approval from global church leaders. They also make gay marriages a sin worthy of expulsion.

The gay marriage policy wasn’t surprising since church leaders have made clear their doctrinal opposition to such relationships. But the guidelines for children marked a jarring shift from the religion’s recent push to carve out a more compassionate stance on LGBT issues.

They prompted a flurry of discussion on Mormon websites, with the idea of targeting kids ruffling even conservative Latter-day Saints who rarely question church decisions.

The church clarified that the rules apply only to children living primarily with same-sex couples.

Nathan Kitchen, a gay Mormon father of five, said that gives him hope his children will be allowed to keep enjoying all the faith’s privileges.

Though the church didn’t specifically address joint custody like Kitchen has with his ex-wife, he thinks the clarification gives his local church leader discretion to avoid implementing the rules against his children.

That will be a major relief to all his kids, especially his 15-year-old son, who worried he might not be able to serve a mission. Two-year missions spent proselyting in other states and countries are a rite of passage for young men in the faith.

“I can’t wait to pick them up from school and let them know that they don’t have to move out and they don’t have to disavow their father’s relationship,” said Kitchen, a 47-year-old dentist from Gilbert, Arizona, who came out as gay about two years ago. “I feel some joy now and much less anxiety for my kids.”

But that clarifications may also lead to bitter custody battles where straight spouses will fight even harder for primary custody to protect their children from being targeted due to a gay parent, said Spencer Clark, executive director of Mormons for Equality, an LGBT support group.

Mormon officials also said children who have already been baptized or given priesthood duties — a common action for young Mormon boys — will not have those rescinded. For children of gay parents who have already notched those milestones, decisions about whether to grant them the next ordinances in the chain will be made by local leaders with the best interest of the child in mind.

Local leaders are encouraged to ask for guidance from senior leaders when situations fall outside the new guidelines, the church said.

They clarified that while children of gay parents won’t be given the full spectrum of ordinances, they aren’t barred from attending worship services.

“All children are to be treated with utmost respect and love. They are welcome to attend church meetings and participate in church activities,” said a letter signed by Mormon church president Thomas S. Monson and his top two counselors.

Troy Williams, a former Mormon and executive director of a prominent Utah LGBT group called Equality Utah, said he’s grateful the church responded to all the pain the rule changes caused. But, he said the group still considers it “incredibly cruel” that the church is forcing children of gay parents to disavow their parents’ sexuality.

A group that had been organizing a protest over the new rules said Friday it plans to go forward with the event. More than 500 people are expected at the protest Saturday in Salt Lake City.

Religions that reject same-sex marriage are just starting to wrestle with how they should address the children of gay spouses and how much the families can be included in church life — if at all.

Earlier this year, Pope Francis said in a sermon that Roman Catholic priests should not refuse baptism to anyone who seeks the sacrament. Still, bishops are the top authorities in their dioceses and can make such decisions on their own.

Some U.S. bishops have fired diocesan employees in same-sex marriages, or refused to enroll the children of gay parents in parish schools, saying their presence would compromise the church’s ability to provide clear moral teaching on homosexuality.

Among conservative Protestants, many denominations are structured in a way that gives broad discretion to individual congregations, so no overarching policies are in place.

For the past several years, the Utah-based Mormon church, which reports 15 million members worldwide, has tried to walk a delicate tightrope of becoming more gay-friendly while holding onto its belief that God intended marriage to be exclusively between a man and a woman. Leaders gave multiple speeches preaching a “fairness for all” approach that encourages compassion for gays while protecting religious liberties.

Mormon leaders said the rules for children target a narrow group since very few married gay couples want their children blessed and baptized in the church.

They said the church is “holding firm to the doctrinal position of right and wrong” and extending love to all while its leaders navigate the complexities of diverse societies and rapidly changing social circumstances.