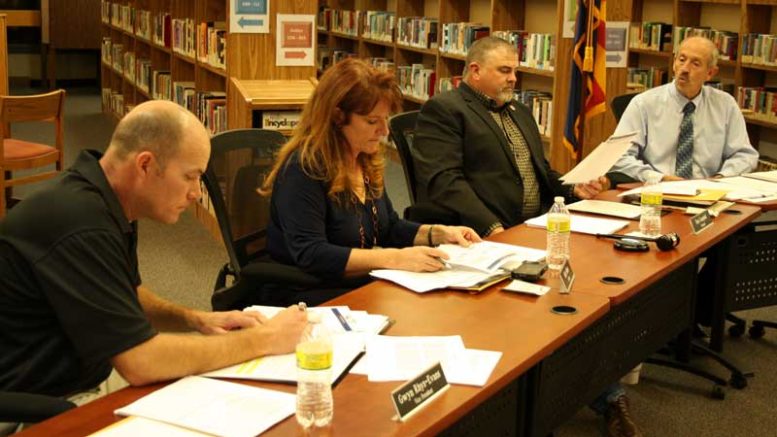 Photo By Gualterio Casias: Morenci School Board members review information during their Oct. 18 board meeting. From left are Gwyn-Rhys, President Kelly Baker, Ron Campbell and Superintendent Dr. David Woodall, who explains the background on the information at hand. The big news of the meeting was an $80,000 grant to Fairbanks Middle School.

School board meeting is overall uplifting

MORENCI – The Morenci School Board meeting Wednesday, Oct. 18, was loaded with good news. In fact, there was even a touch of “magic” involved.
The magic touch involved an $80,000 grant announced by Fairbanks Principal Ana Van Zile. The grant from the United Way, with strong support from Freeport McMoran Inc., will result in major improvements for the band, choir and art rooms as well as the library. The grant application was submitted by Van Zile as a “Fine Arts Facelift.”
There were very positive expressions all around, from big smiles to head-nodding, as United Way representative Laura Dorrell and and FMI’s Emily Muteb presented a huge replica of the $80,000 check to the school district. Present to receive it, along with Van Zile, were band director Jared Collins choir director Gene Willey, art teacher Andrea Einwaechter and librarian Dede Guerrero.
Receipt of the check was among the many aspects of student activities reported to the board, which also received upbeat reports ranging from the district’s kindergarten to its high school. 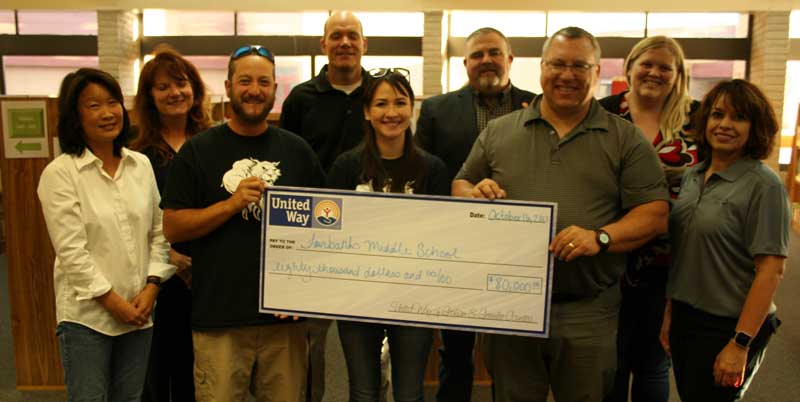 Photo By Gualterio Casias: Morenci’s Fairbanks Middle School has received an $80,000 grant from the United Way for improvements and supplies in the school’s band, choir, fine arts and library programs. The grant application was written by Fairbanks Principal Ana Van Zile. A huge replica of the check was presented at the Oct. 18 Morenci School Board meeting. Pictured are, front row, from left, Van Zile, band director Jared Collins, art teacher Andrea Einwaechter, choir director Gene Willey and the United Way’s Laura Dorrell; back, from left, Morenci School Board President Kelly Baker, board member Gwyn Rhys-Evans, board member Ron Campbell and Emily Muteb from Freeport McMoran Inc. Freeport has consistently been a strong supporter of the United Way. Muteb is FMI’s representative in the United Way grant program. Dorrell is with Gila Healthcare Resources based in Morenci.

Van Zile, who is in her second year as Fairbanks principal, recalled when she first arrived last year she was somewhat taken aback by what she saw. That included the band’s bass drum being held together by large strips of gray tape. Thanks to the grant a new drum will be purchased.

The principal listed several other improvements to be made for the band, choir, art rooms and the library, all of which will receive Smart Boards  The band will have snare and bass drums, a Malletkak, tuba, music stands, music chairs, a keyboard and lifetime chairs and performance chairs.
Art rooms will have a pug machine, kiln, potters wheels, screen printing stations, art tables, stools, Wacom tablets, computers, drying racks and a display board.
Among improvements in the library will be the expenditure of $15,000 in electronic books.
Van Ziel emphasized to the school board that research shows a link between music and spatial intelligence that relates to visualization and improved test scores, while visual art, choir, and band are associated with student benefits in the areas of reading and language skills. Van Zile said the link also involves mathematics skills thinking skills, motivation to learn and creating a positive school environment.
The principal expressed her gratitude for the grant, saying, “We thank the employees of Freeport McMoran and the City of Safford as well as citizens of Greenlee and Graham counties for their support of the United Way and their commitment to the education of our youth.”
Van Ziel said to the school board, “Thanks for helping to make magic happen for us at Fairbanks.”
All three board members, President Kelly Baker, Gwyn Rhys-Evans and Ron Campbell smiled broadly and voiced their support as Van Zile Concluded her report.
Among other activities, the principal told of the success of the Family Game Night held at the Fairbanks Multi-Purpose Room. She also spoke of the seventh-eighth-grade football team’s success. The squad took the conference title.
Metcalf Elementary School Principal Jennifer Morales presented students from kindergarten to fourth grade to be recognized for their achievements. The first student to be represented was kindergartner Rodney Gash, whose teacher is Andrea Hudman. Morales said, “Rodney is a very thoughtful young man who is always willing to help out a classmate. His kindness and respectful attitude shine through and he is a role model for his classmates. He consistently makes good choices even when no one is looking.”
That comment brought a smile from the board and audience along with a somewhat sheepish expression and a grin from Gash. Morales continued, “He works very hard to do his best and encourages others around him to do as well.”
The principal added, “He even took an extra list of Bubble Gum words (he’s on list #6 and we just started on #2) to work on during fall break. His mom asked for the list, of course, but look at what a difference parent support can make!” 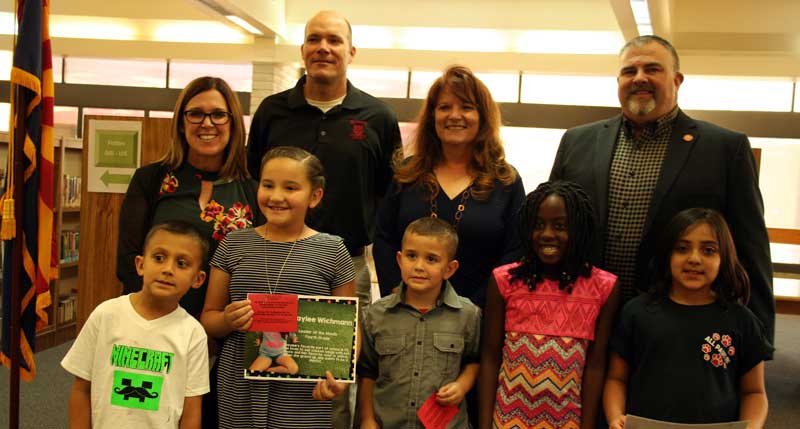 Next, Morales introduced first grader P.J. Reyes, who teacher is Elizabeth Dunagan. The principal said, “Patricio is a great student inside and outside the classroom. He always tries his best and strives to excel in everything he does. The first day of school Patricio showed me that he cares for other students’ well-being.

“Patricio’s heart is so big that he is always taking care of our special needs students and making sure their day runs smoothly. He is a kind, caring and accepting student. He is a great role model.”
When introducing Gash and Reyes, Morales pointed out each wants to become a police officer.
Morales then introduced second-grader Tracy Mianda, whose teacher is Janet Vaughn. Morales said, “She is a wonderful student academically. She is highly proficient in all her standards in second grade. She exceeds in her daily math skills. Tracy is very kind to all of our students and offers to help them when they struggle. She is dependable and always does the right thing at the right time.”
Third-grader Jaycee Avila, taught by Cassandra Hernandez was also praised, Principal Morales said, Jaycee is the true meaning of a leader. Every day she comes to school ready to learn She always works hard on her classwork and even offers to help those who need it. She tries really hard to meet her goals and is always successful. She gets along well with other students on the playground. Because she follows, the CATS code, she is the perfect student leader to represent the third grade.
CATS? The Morenci School District’s mascot is the Wildcats, from which the acronym CATS is derived. It stands for C-Care about each other; A-Act respectfully; T-Try our best; S-Show pride and perseverance. Included in the code is “All Paws In.”
Fourth-grader Shallee Wichmann, taught by Ashley Clark, was referred to by Morales as “an awesome student. She is a very hard worker who always tries her best. Every day she comes to school with a smile on her face and ready to learn. During class, she sets an example of what it means to be a leader by helping others and staying on task. Overall, Shaylee is a great kid and we are lucky to have her in our school.”
High School Principal Bryan Boling presented officers of the Morenci High School Student Council. He pointed out there are several other members of the council, as well, who make “very positive” contributions to the school. They are the voice of the student body,” he said, adding they make suggestions and offer input to the school’s administration. “They truly make a difference,” he said. 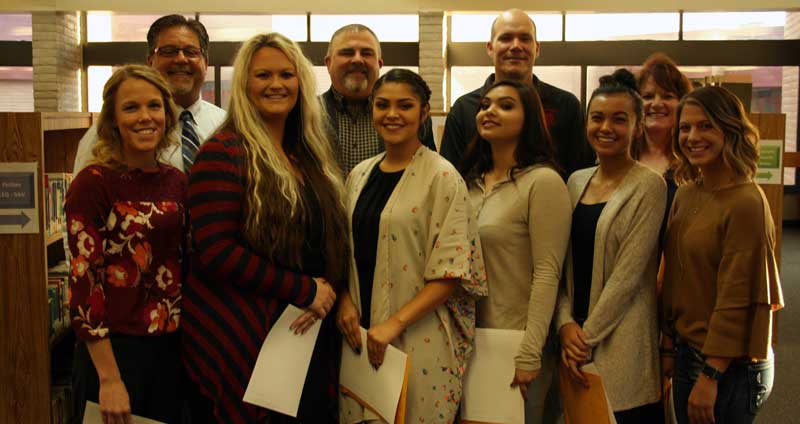 He told the school board that for the sake of brevity at the meeting he was introducing officers only. He introduced President Paige Morales Vice President Shaunee Seballos, Treasurer Mireya Saenz, and Secretary Dezirae Gallegos. Due to other commitments, Historian Donovan Aughenbaugh was not present. Student Council sponsors are Kristy Roberts and Alex Aguilera.

The principal also advised the board that parent-teacher conferences were being held shortly after the board meeting. He emphasized the importance of the conferences saying they provide an opportunity for parents to better learn where their children are and what they are doing academically. Boling said the high school communicates with parents to inform them about the conferences and hopes to see more parent participation.
Boling also spoke of the week’s homecoming activities that included a 7 p.m. bonfire, also to be held after the school board meeting. The MHS homecoming parade is at 4 p.m. Friday, Oct. 20, on Burro Alley. A tailgate party will be held by the Class of 2019, 4:30–6:30 p.m. at the Junior Varsity field located south of Lawson Stadium. Cost of the event is $8 and includes a mixed burro enchilada style, topped with lettuce, tomato and rice and a snickerdoodle cookie along with a drink.
Other Business
The school board covered several other topics that included personnel matters involving approval of coaches for winter sports activities, classroom volunteers, support staff and employment of certificated personnel.
The district added to its certificated staff in hiring counselors Joe Garcia and Andrea Wilson.
Under employment of support staff, the board approved Frank Kerrigan as maintenance director and Deann Chavez as a school bus driver. Samantha Good was approved as a substitute teacher. The board also approved classroom volunteers Adriana Gates, Alexia Gonzales, Maggie Philips and Deann Chavez.