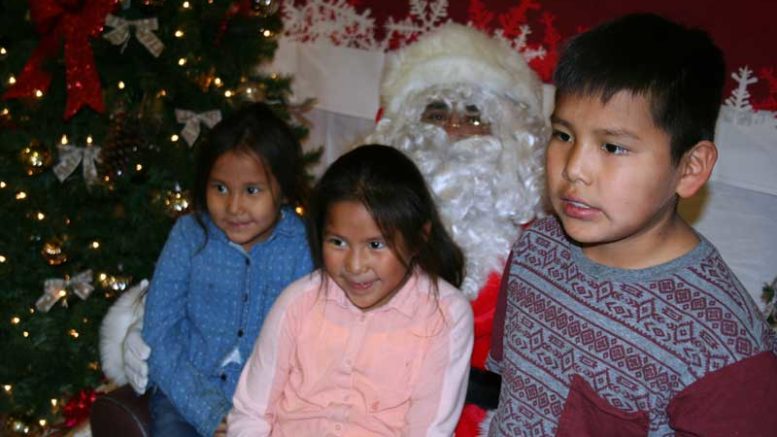 Photo By Gualterio Casias: Santa Claus had a warm welcoming lap for the many children who told them their Christmas wishes at the 2017 Morenci Christmas Festival on Nov. 30. Here, Aleisha, Lauren and McKendrin Davis visit Santa, who was situated on the second deck of the Morenci Community Center. A long line of children, accompanied by parents, waited for Santa's lap so they, too, could share their Christmas wishes. Several children told the jolly old man, "I love you, Santa."

Santa Claus, Starbucks are among highlights
By Gualterio Casias

MORENCI – It certainly was not a cold night. Freezing temperatures have not yet hit southeastern Arizona, but it was just cool enough, in the mid-60s, for a cup of hot chocolate to be quite desirable. There was no doubt about that as children and parents consumed gallon upon gallon of hot chocolate at the 2017 Morenci Christmas Festival.

Overall, the festival crowd was estimated at around 500 during the course of the event.

The beverages were ready by the beginning of the festival and the creamy, sweet chocolate was a major attraction. Starbucks baristas busied themselves placing already-filled cups on a table to which celebrants could easily gain access and be on their way to other festival events. 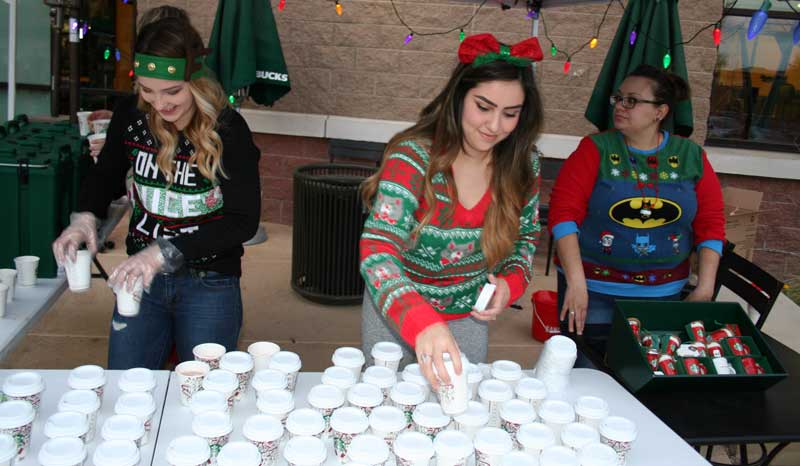 Photo By Gualterio Casias: From left, Morenci Starbucks baristas, Tianna Wright, Selyna Saiz and Angelica Butz, prepare some of the hundreds of hot chocolate Starbucks handed out for free to the 2017 Morenci Christmas Festival at the Morenci Plaza. Starbucks was the initial hot spot for the estimated crowd of 500 children and adults who enjoyed the Nov. 30 event.

The chocolate provided by Starbucks was free, so were the cake pops and soft cookies set beside the cups. The tables in front of Starbucks were crowded as people either sat or stood and visited with friends. The scene was quite jolly and kicked off the festival with much good cheer as was made apparent by laughter and people wishing each other holiday greetings. 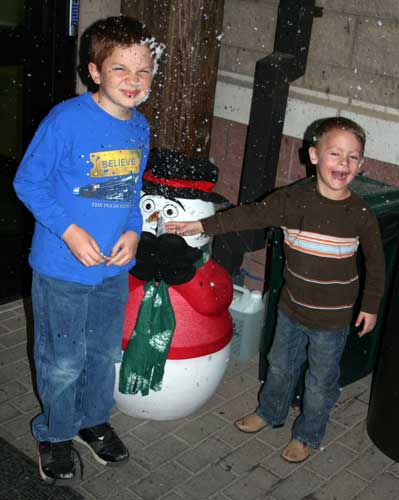 Photo By Gualterio Casias: Two youngsters get a kick out of having “snowflakes” blown on to them by a snowman positioned at an entrance to the Morenci Community Center.

The ultimate goal for children, all accompanied by parents, was the Morenci Community Center where Santa Claus awaited children who would sit on his lap and tell him, sometimes in a whisper, what they are hoping to receive for Christmas. The subject of whether a child had been naughty or nice during the past year did not seem to be broached, at least not loud enough for one keen observer to hear. Perhaps that subject was spoken so softly that only Santa and children on his lap could hear the question and response.

Santa Claus was indeed a very busy fellow from the time he arrived at the community center, thanks to the Morenci Fire Association and Clifton Fire Dept. When he stepped out of a Morenci fire truck children did not rush at him as one might expect. Instead, those young ones present stood back as if in awe of the man who represented their hopes and wishes for Christmas morning.

Santa was escorted to the second deck of the community center where his throne-of-sorts, awaited him. He spent at least the next two hours radiating his good cheer and visiting with many, many children. The second deck has an indoor walking and running track. It provided an ideal setting for the very long line of children, with moms or dads in tow, who were lined up for their respective turns to visit the wonderful, mysterious man. 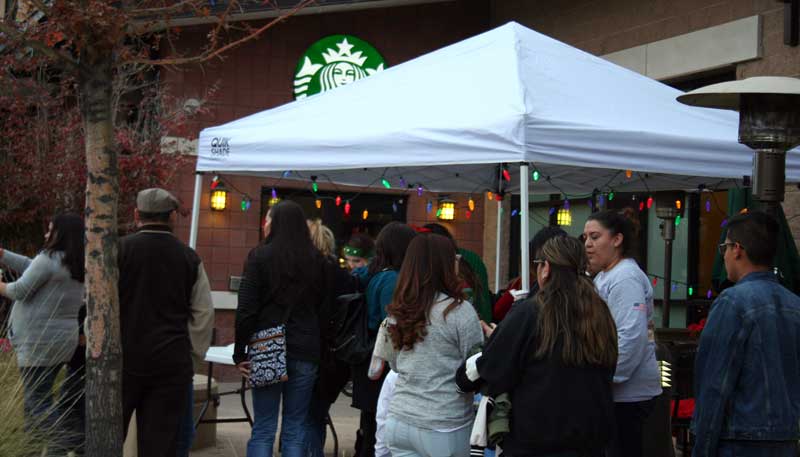 Photo By Gualterio Casias: Part of the crowd attending the 2017 Morenci Christmas Festival on Nov. 30 pick up cups of free hot chocolate provided by Morenci’s Starbucks. The festival crowd was estimated at about 500. The hot chocolate was one of the festival’s main attractions.

He was clad in his traditional red and white outfit. Of course, he had a thick, white beard and mustache. He also wore glasses. After all, Santa is probably at least a couple of centuries old and with glasses could better see the smiles of all the children who spoke to him. 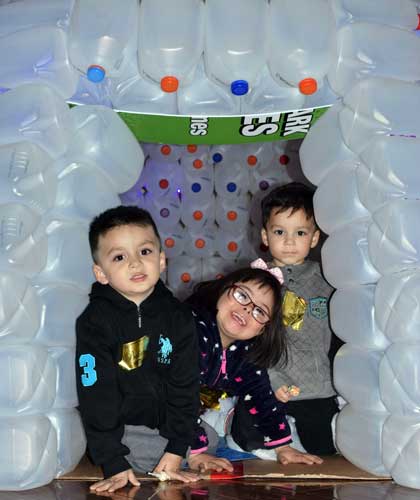 Photo By Raymundo Frasquillo: Children enjoy the “Igloo” at the festival.

On the first deck of the community center were two forms of entertainment specifically for children where they could happily bounce around or speedily slide. There was a light blue castle which children could enter and bounce around in. The other feature was a long inflatable slide which drew yells of delight as riders sped their way down.

The castle and slide were set up in the center’s basketball and volleyball courts, which are also used for other athletic events. There were lines of children waiting to bounce around or slide. The longest line was by far the one leading to the castle.

It may have come as something of a surprise to some when they entered the community center and were greeted to the gentle serenading by the Bolen Family, a singing group from Thatcher. An observer remarked that the family’s harmony was “absolutely beautiful” as the group sang Christmas carols and other holiday tunes.

Dad Byron Bolen said the group was advised on short notice of the festival. “If we had known it (the festival) was this big, we would have brought more of us,” he said, adding that the group was enjoying itself very much. Someone commented to him that hopefully, the group will return next year.
Upon entering the area of the Morenci Plaza where the community center, library, and Morenci Club are located, celebrants were greeted by a conductor and engineer at the historic mini-gauge locomotive in front of the Morenci Club. The engine is covered with Christmas lights. The conductor gave kids “passes” to the festival while the engineer, who stands 6’8″, had to bend down halfway to give each child a peppermint candy cane. 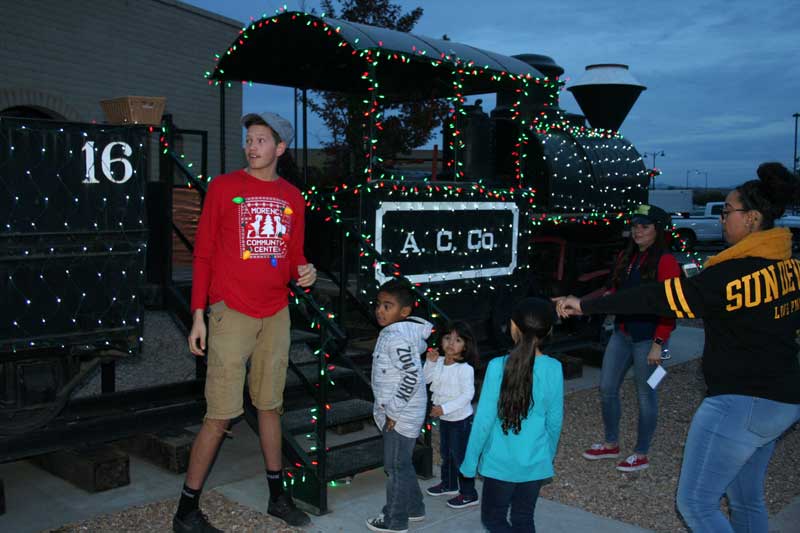 Photo By Gualterio Casias: A mother readies to take photos of her children as they prepare to meet the engineer of a historic baby gauge locomotive decorated with Christmas lights. At right is the locomotive’s conductor who offered “boarding passes” to children who went on to enjoy other festivities at the 2017 Morenci Christmas Festival on Nov. 30. The locomotive was formerly located at the top of the now-extinct Coronado incline leading the Coronado mine. It was again relocated this spring in front of the Morenci Club.

The locomotive was long ago, in the early 1900s, located atop the very steep Coronado incline, which led to the underground Coronado mine. It and two other such locomotives hauled small ore cars from the mine to the incline where the cars were detached from the engines and lowered via long, strong cables to the incline’s bottom.

The locomotive now on display at the Morenci Club was placed there this spring.

The Morenci Library proved quite interesting for visitors. It had an area with a cardboard replica fireplace, soft chairs, and couches on which parents could sit and relax while their children occupied themselves with toys in a play area immediately in front of the fireplace.

The library had on display a “Polar Express,” highlighted by an igloo from which emanated soft blue light. It appeared to fascinate adults as well as youths. Among youngsters who appeared at least somewhat fascinated was Max Clancy, of Silver City, N.M., who stood to observe a little girl who was making her way in an out of the igloo. The small entrance to the structure was quite small which perfectly accommodated the child. She was able to enter and exit while standing up.

Clancy is the son of Raphael and Dr. Naomi Clancy, who serves as a physician at Gila Health Resources in Morenci. Max’s two brothers, one older and the other younger, were also at the festival. 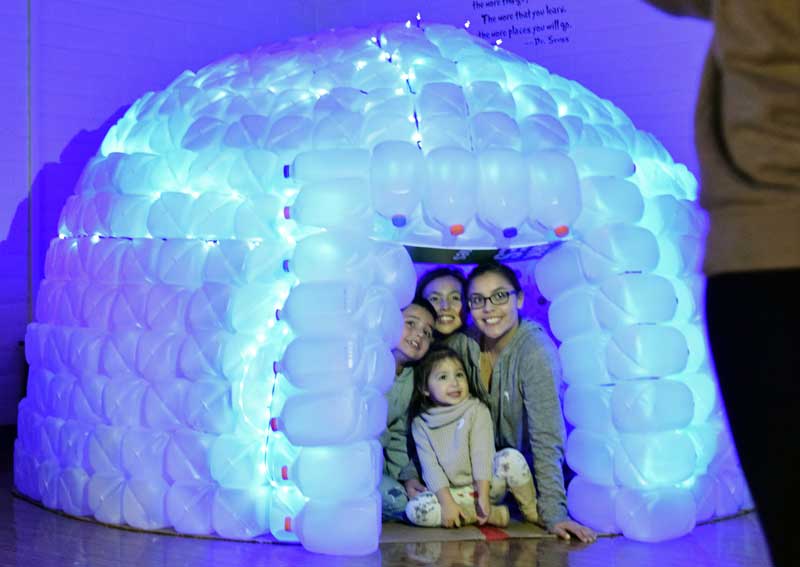 Photo By Raymundo Frasquillo: A family poses for a picture under the soft blue light of the “igloo”.

The Morenci Club, with its tile floor, served as a roller skating rink during the festival. The club’s interior was quite dark but there was enough decorative lighting for skaters to wee and make their way across and around the floor.

Not all of the festival highlights were held indoors. Horse-drawn carriage rides were provided in the parking lot of the community center. Although there was a cloud cover that blocked the stars in the sky from view, that did not seem to bother one bit those who rode the carriages. The brisk evening air seemed to only enhance the experience. 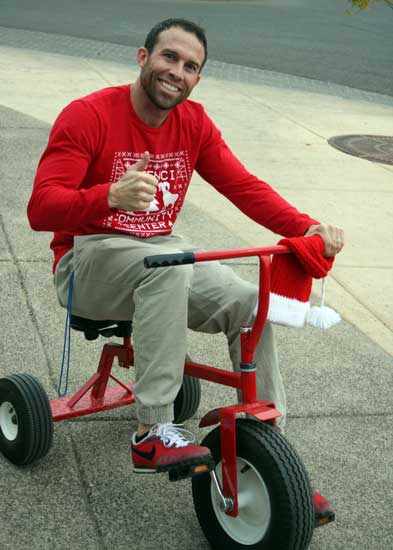 Photo By Gualterio Casias: Morenci Community Center Director Steve Richardson gives a thumbs up just before the start of the 2017 Morenci Christmas Festival.

Was the festival a success? According to all individuals, including staff members who were interviewed, it certainly was. It certified the thumbs up that Community Center Director Steve Richardson gave just prior to the festival’s start. Richardson was riding a red tricycle as he wore a red T-shirt that had white snowflakes and Morenci Community Center emblazoned on the front. A Santa-style hat hung from the trike’s left handlebar.

He rode the tricycle for only a short while. He spent the evening walking from event to event to gauge the progress of each. All told, Richardson probably walked three or more miles in the process.

“It was our goal to take this event to a higher level and I think we’ve met that goal,” Richardson said. “Everyone seems to be having a very good time.” He noted the cooperation of Starbucks in providing the free hot chocolate and other treats for the public. “That was very special and really added to the cheer and holiday atmosphere. People loved the hot chocolate. It was really a treat for them, especially at no expense.”

He also pointed to the Starbucks baristas who “worked hard and showed so much cheerfulness” in serving the public. “Those are some very good people.They’re very professional, polite and make people feel welcome, whether it’s in the store or out here serving the chocolate.”

The Starbucks store is located in part of the community center.

Richardson also expressed his gratitude to the Morenci Fire Association and the Clifton Fire Dept. for bringing Santa Claus to town. “It was great to see them working together with so much holiday spirit,” he said. “We very much appreciate that.”