DUNCAN – The Brenda Carabeo-coached Morenci boys tennis captured the title in the four-team 2017 H.T. Clothier Invitational Tournament on Saturday, March 4, to conclude its initial week of competition. The Wildcats won 23 of 27 matches for a total of 23 points; runner-up Tombstone Yellow Jackets had 16, while the host Duncan Wildkats had 14, and the St. David Tigers one.

Individually, sophomore Matthew Garcia (4-0) at No. 1, senior Marcus Aguallo (4-0) at No. 3 and junior Luis Tejada (4-0) at No. 5 each went 3-0 to win singles titles, while the duos of sophomores Tanner Hudman and Andrew Vigil at No. 1 plus Garcia and Aguallo at No. 2 both won three doubles pairings.

The other singles winners were Tombstone No. 2 Adam Sebastian and No. 4 Jon Michael Bulan plus Duncan No. 6 Lucas Basteen. The Wildkats’ No. 3 doubles team of Nate Rapier and Basteen also finished in first place.

Morenci downed the Cowboys, 8-1, in Willcox during the season opener March 2.

The Wildcats won 8-9 doubles matches plus 15-18 singles matches during the all-day Duncan tourney. 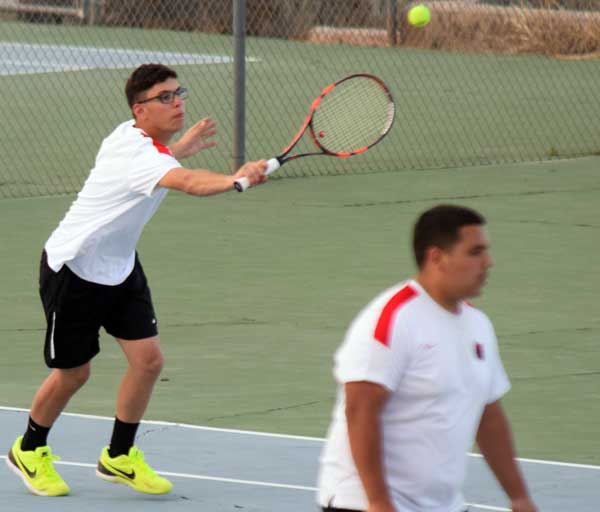 Photo By Raymundo Frasquillo: The No. 1 Matthew Garcia – Marcus Aguallo duo (4-0) won three matches in the Duncan tourney to place first. Aguallo returns the ball as Garcia awaits the return from the net.

The No. 3 duo of Tejada – Espinoza (2-1) also gained a forfeit from St. David, fell 4-6 to Nate Rapier – Basteen of Duncan and defeated Phillips Merlos of Tombstone, 6-4.

All six singles and two of three doubles matches resulted in Morenci wins.

Garcia and No. 3 Vigil both had 8-6 wins over sophomore Chase Childers and senior David Krause, respectively. Hudman and No. 4 Ryan Williams (1-0) both had 9-7 wins over juniors Javier Garcia and Oliver Rodriguez, respectively. Tejada downed senior Mark Rios, 8-5, and No. 6 Aguallo received a forfeit.