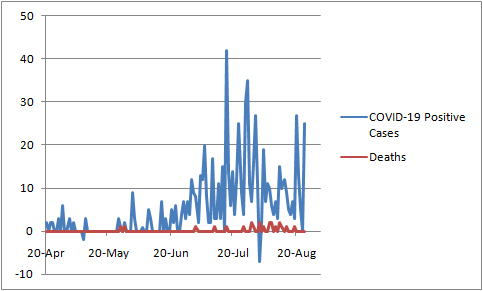 In an e-mail to Gila Valley Central, Health Department Director Brian Douglas said it’s still too early to know if classrooms re-opening in Thatcher and Pima last week are having any impact on the number of new cases in the county.

“We won’t know results of schools re-opening until next week at the earliest,” Douglas said. “We’ll definitely know by Labor Day weekend (of) the direction we’re heading.”

The San Carlos Apache Tribe reported nine new cases were recorded on the reservation Monday. That brings the tribe’s total to 757, with 120 of the cases still active, 626 recovered and 11 deaths.

San Carlos Apache Tribal Chairman Terry Rambler posted on his social media that the Tribal Council has begun easing restrictions on tribal members living on the reservation, lifting the curfew  “for & approved camping and scouting for tribal members and guides.”

The tribe’s Emergency Response Commission told Gila Valley Central it has not yet received the council’s resolution, and the commission is still in the process of determining if curfew is lifted for all tribal members or only those camping and scouting.

Greenlee County is now on Day 18 of no new coronavirus cases.