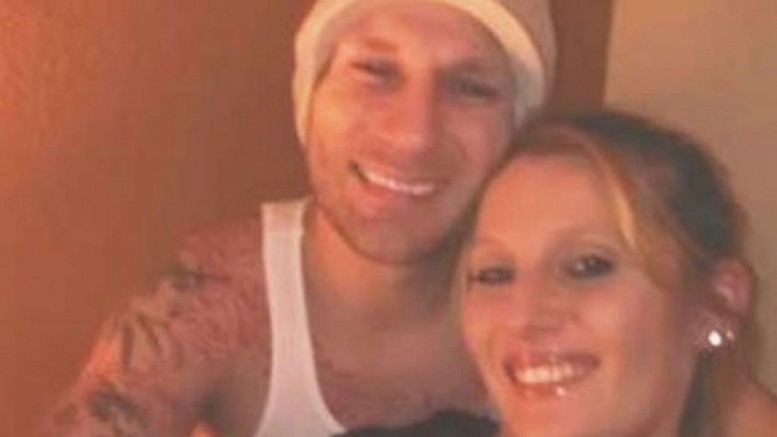 MILTON, Fla. (AP) — The search for a Missouri couple suspected in a series of robberies and abductions across the South ended in a shootout in the Florida Panhandle early Friday that left the man dead and the woman wounded, authorities said.

Blake Fitzgerald died and Brittany Nicole Harper was taken to a local hospital, according to a statement from the Escambia County Sheriff’s Office.

Few other details were immediately released, but local news outlets report that the shots were fired after a chase. In online video posted by Pensacola, Florida, station WEAR-TV, a volley of gunshots can be heard amid flashing police lights.

Dozens of police and sheriff’s deputies blocked a rural road leading to the site where the couple was found Friday morning.

Santa Rosa County sheriff’s Sgt. Rich Aloy said his agency learned around 12:30 a.m. that the suspects were heading into Santa Rosa County, so their officers joined the search, which ended on a road. Aloy said that because a shooting took place, the Florida Department of Law Enforcement was taking over the investigation. Aloy provided no other details of the chase and shooting.

Aloy also said they are fortunate more people were not hurt. It would have been worse if it happened earlier in the day because there would have a lot of traffic, he said.

Authorities have linked Fitzgerald and Harper to a series of crimes in Alabama and Georgia, saying the offenses fit a similar pattern: People are robbed, kidnapped and let go unharmed, usually after a vehicle is stolen.

Before that, police in Joplin, Missouri, had wanted to interview the two about a Jan. 22 break-in there in which guns were stolen from a home. The couple is also suspected in two Florida robberies in Walnut Hill and Destin on Wednesday, U.S. Marshals spokesman Martin Keely said.

Calling them a “modern-day Bonnie and Clyde,” the U.S. Marshals announced Thursday that they were offering a reward of up to $10,000 for information leading to their arrest.

Fitzgerald and Harper have been charged with robbing and abducting a hotel clerk in Tuscaloosa, Alabama, and taking his car to the Birmingham area. The clerk was let go in the upscale suburb of Vestavia Hills, where a woman was briefly abducted by two people who stole her family’s Ford Edge SUV.

On Monday night, a gunman held up a young clerk at a Murphy Express station along Interstate 75 in south Georgia, taking money from the safe and cigarettes before forcing the clerk into an SUV where his female accomplice waited, authorities said. The couple drove about 15 miles before releasing the clerk unharmed, Perry police Lt. Ken Ezell said.

The hotel clerk who was abducted in Alabama, Kyle Dease, told Al.com that he spoke with his captors during the nearly two hours he was held on the drive from Tuscaloosa to metro Birmingham. Dease said they told him they hoped to make it to Florida to get married and start a new life together.

The man also told Dease he did not plan on going back to prison.

Missouri records show that in 2013, Fitzgerald and an accomplice were charged with burglarizing a Joplin woman at knifepoint in her home and making off with her purse, jewelry, electronics and a car. Fitzgerald entered an Alford plea — not admitting guilt but acknowledging the prosecutors had sufficient evidence for a conviction — and was sentenced in 2014 to a suspended seven-year prison term.

Fitzgerald also was sentenced in southwestern Missouri’s Jasper County to a simultaneous 120-day term in a drunken-driving case. Last July, Fitzgerald pleaded guilty in a Missouri assault case and was sentenced to a suspended five-year prison term.

This story has been corrected to give the correct spelling of Walnut Hill, Florida.

This story has been corrected to give the correct spelling of Rich Aloy’s last name.