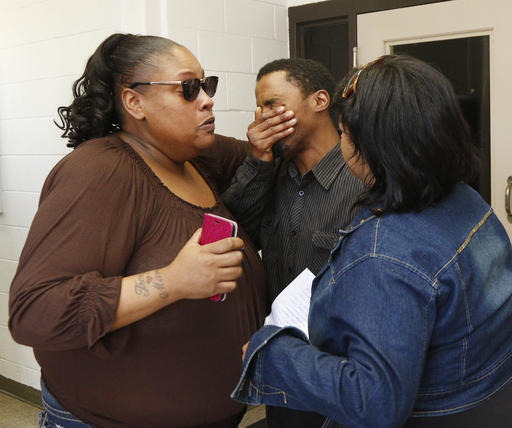 An emotional Joshua Blunt, center, is surrounded by family members after being released from the Grenada County Jail in Grenada, Miss., Tuesday, May 24, 2016. Blunt, who is charged with second degree murder, is accused of leaving his 8-month-old daughter in the back of his car where she later died. He was released without bail. (AP Photo/Rogelio V. Solis)

GRENADA, Miss. (AP) — A Mississippi man whose daughter died after he left her in a hot car was released from jail without bail Tuesday, with the possibility that the second-degree murder charge against him could be reduced.

Grenada Municipal Judge Rusty Harlow ordered the release of 25-year-old Joshua Blunt on his own recognizance after city prosecutor Jennifer Adams requested the move and a friend and a police detective testified he wasn’t a flight risk.

Harlow wept as he emerged from the Grenada County jail a few minutes later, embraced by relatives and friends who had offered vocal support during the brief court hearing.

However, Harlow said he wanted to hear from Grenada County District Attorney Doug Evans, who prosecutes felonies in the county, before making that decision.

Blunt’s lawyer, Carlos Moore, has said he will fight that lower-grade felony charge.

Janette Fennell, founder of Kansas-based nonprofit child safety organization KidsAndCars.Org, said criminal charges were filed in just fewer than half of cases involving the deaths of children in hot cars in the United States between 1990 and 2015.

The district attorney was present for the hearing but didn’t participate. Evans later told The Associated Press that the correct procedure would be for city officials to drop the original murder charge and enter a new culpable negligence charge. Evans said he’s seen some information from the investigation, but couldn’t comment on whether he believed Blunt knew the child was in the car.

Shania Caradine, Blunt’s daughter, died Thursday after she was left in her father’s car outside the 333 Restaurant in Grenada. Blunt’s lawyer says she was there for about four hours. The lawyer said Blunt and a co-worker found the infant in the car, took Shania inside the restaurant and put cool towels on her to await an ambulance that took her to the University of Mississippi Medical Center Grenada. Grenada County Deputy Coroner Jo Morman said physicians at the hospital tried unsuccessfully for hours to revive the baby.

She was the second Mississippi child to die from heatstroke in a vehicle within two weeks. No charges have been brought against a parent in the other case.

Supporters and family members erupted in claps and cheers in the courtroom after Harlow ordered Blunt’s release, with one person shouting “Oh yes!”

“We think it was fair because he’s working two jobs and he’s never been in trouble. “He’s just trying to support his family. It’s just an accident.”

Archer said Blunt was called in to work Thursday on a day he had been scheduled to be off. Archer speculated that the change in routine distracted Blunt from dropping off his daughter at the home of Shanice Caradine, the child’s mother and Blunt’s girlfriend.

Among supporters present Tuesday was Allyson Worsham, who owns the 333 Restaurant. She called Blunt a good worker who had been “so proud” when his daughter was born.

“This has been a horrible tragedy,” said Worsham said. She thanked a jail guard for watching Blunt, saying he had voiced thoughts of suicide after his daughter’s death.

“Shanice sent a message to me that she loves him and that she and Shania forgive him,” Worsham said.

Follow Jeff Amy at: http://twitter.com/jeffamy. His work can be found at http://bigstory.ap.org/author/jeff-amy