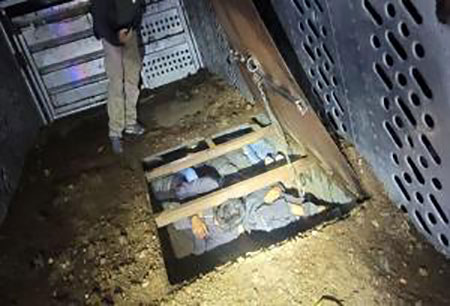 Tucson Sector agents conducted a vehicle stop on a Freightliner semitruck pulling a cattle trailer around 1 a.m. After receiving permission to inspect the trailer, agents discovered nine migrants in an enclosed space hidden beneath a false floor. The migrants had no means of escape.

The driver of the Freightliner, a local U.S. citizen, faces smuggling charges. The migrants were arrested and processed for immigration violations.

This case follows a similar smuggling attempt of 33 migrants along the same stretch of Route 82 on September 25.

U.S. Border Patrol agents and their law enforcement partners are dedicated to the safety and security of all whom they encounter. They regularly rescue migrants from extremely dangerous transportation situations, such as being hauled insecurely in trunks and trailers, and callous smugglers who show no regard for their wellbeing.

U.S. Customs and Border Protection is the unified border agency within the Department of Homeland Security charged with the comprehensive management, control, and protection of our nation’s borders, combining customs, immigration, border security, and agricultural protection at and between official ports of entry.