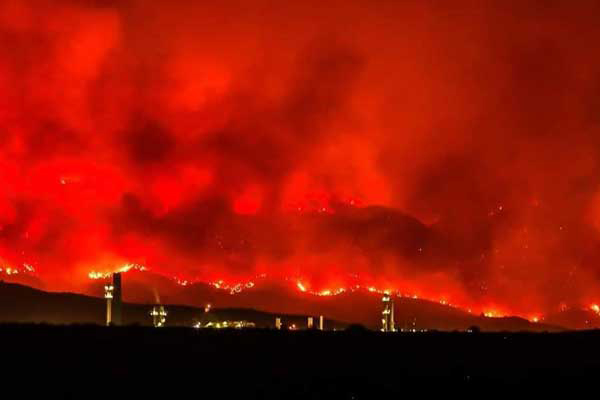 The Telegraph fire as seen from Globe on Sunday evening. - Contributed Photo/Leslie Petty

GLOBE — Two wildfires to the west of Graham County have severely impact Gila Valley residents’ ability to travel to the Phoenix area, and are threatening the communities of Superior, Peridot and Top of the World.

The fire forced the evacuation of Miami residents south of U.S. Highway 60, Top of the World and Oak Flat campground, and has resulted in Superior and potions of Globe being in Set mode for evacuation.

It has also forced the closure of U.S. Highway 60 between Superior and Miami in both directions.

The Southwest Area Type 1 Incident Management Team assumed responsibility of the Telegraph fire early Sunday morning and additional resources continue to be assigned to the fire. There are currently 191 personnel assigned to battle the fire.

The fire started Friday, June 1 and, while investigation into the cause of the fire continues, it is believed to be human-started.

Also as of Monday morning, the Mescal fire is at 52,887 acres and is 8-percent contained.

The fire has forced the evacuation of Soda Canyon, the San Carlos High School area and residents of El Capitan east of State Route 77. In Set mode are Lower Peridot and Peridot South, El Capitan west of SR 77, Beverly Hills, the T11 Ranch and the Skill Center.

A total of 672 personnel have been assigned to fight the blaze.

The fire has closed U.S. Highway 70 to commercial traffic and semi-tractor trailers between Fort Thomas and Globe.

The fire was discovered June 1 and cause remains under investigation.

A third area wildfire, the Sam fire just north of Bylas, burned 477 acres and was at 90-percent containment as of Monday.

Editor’s note: This story was updated at 10:43 a.m. Monday, June 7, 2021, with the acreage burned by the Mescal fire and the evacuation of a portion of Miami.