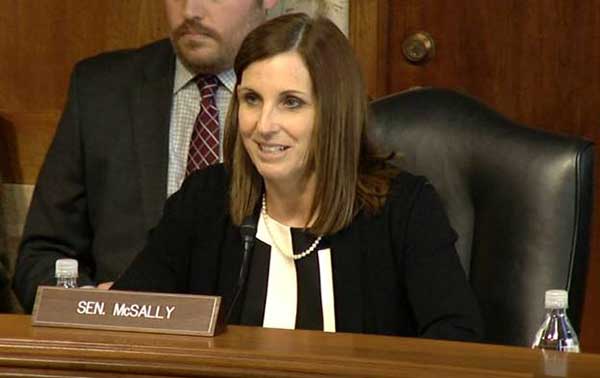 McSally chaired a U.S. Senate Committee on Energy and Natural Resources Subcommittee on Water and Power hearing to examine issues and challenges at the Power Marketing Administrations (PMAs). During the hearing, McSally asked regional power administrators how they will continue to provide reliable, low cost, and carbon-free energy for Arizona and the regions they serve.

“The affordable hydropower delivered by WAPA [Western Area Power Administration] to our cooperative and municipal utilities has helped keep power bills low and allowed for our economy and population to grow,” McSally said. “But, as with all long relationships, there are often rough patches and disagreements. I’m sure this is true at all of the PMAs, but we’ve certainly had some unique issues arise in Desert Southwest. While we don’t always see eye-to-eye with WAPA, we’ve shown how to work through the differences and things have improved in recent years. Can each of you talk a little about where PMA hydro in your regions sits in the overall market, and efforts underway to ensure that the federal hydropower resources remain competitive?”

WAPA Administrator and CEO Mr. Mark Gabriel responded: “We’ve had—certainly in the past six years that I’ve been administrator—making sure that we maintain our costs in line with what’s happening in the industry…The good news for us, with the exception of the California system, our rates are significantly below those in the market. In fact, we are often the price-maker in a market.”

McSally also noted that she recently joined several of her colleagues to send a letter to Office of Management and Budget Director Mick Mulvaney to oppose a recent proposal to sell the transmission assets of the PMAs. Stakeholder analysis has clearly demonstrated that selling off existing assets would inevitably raise electricity rates for millions of Americans as new owners seek to recoup and monetize their investment. The letter outlined the value PMAs provide, particularly to rural areas, and noted that generation and transmission costs are borne by ratepayers, not taxpayers.

“PMA power rates are set to fully recover taxpayers’ investments in the power generating capability of the dams, which is repaid with interest,” the Senators wrote. “In addition, federal power rates financially support the flood control, navigation, irrigation, water supply, wildlife enhancement, recreation, and salinity control functions at these multipurpose federal dams. In many cases, Federal water projects would not have been built but for the anticipated revenue associated with the sale of the power that is generated.”

The PMAs are responsible for distributing hydropower generated from federally-owned dams to local municipal utilities and electrical cooperatives at cost. In the past, WAPA has been subject to scrutiny from the Department of Energy Inspector General and media for personnel management concerns and problematic spending activities. Congressional oversight has helped improve transparency and accountability at WAPA and ensure the PMAs continue to provide reliable, low cost, and carbon-free energy for Arizona and other regions they serve.