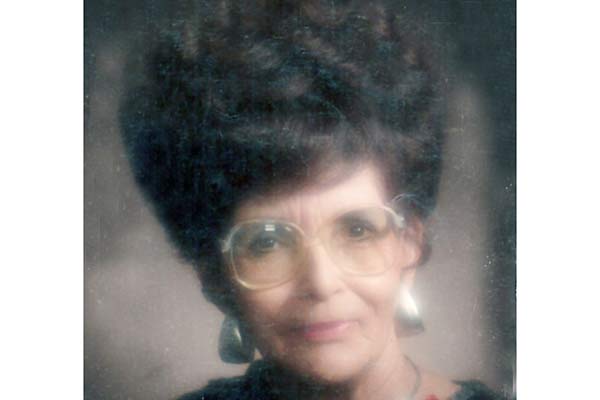 In September of 1940, she married Thomas Monzingo and moved to the 7F Ranch in the Bonita area.  After the birth of their two daughters, she began working by driving the “Ranch School Bus”, which she did for twenty years.  She was also a Brownie and Girl Scout leader, the Bonita Community 4-H leader, a supporter of Willcox Rainbow Girls and a 30-year member of the Willcox Cowbells.  Tom & Marge supported the reorganization of the Arizona Junior Cattle Growers in the 1960’s.

With both girls graduated from high school, Marjory began volunteering for the Willcox Hospital Auxiliary.  Tom was a founding member of the Willcox Elks Club, making her a Lady Elk.  Later she joined the Safford Emblem Club.

As Tom’s health declined, they moved to Safford where she began working on the Graham County Treasurers Office, retiring 17 years later as Chief Deputy.  Tom passed away shortly before their 48th wedding anniversary in 1986.

Her retirement hobbies were growing flowers, ceramics, oil painting and later, writing with the encouragement of her second husband, George Hamilton, whom she married in January 1996.  The two spent countless hours volunteering within the American Legion and Gila Valley Honor Guard until George’s passing in January 2011.

Marjory is preceded in death in by husbands Thomas Monzingo and George Hamilton, her son-in-law Bradley Johnson, her grandson Brian Johnson, her brother and his wife James & Rose Speaks, her sister and her husband Edith & Jim Caldwell and her nephew Don Caldwell.

Services will be held on Monday, March 19, 2018 at the McDougal’s Caldwell Chapel beginning with a viewing at 11:00 a.m. followed by the funeral service at 12:00 p.m. with Pastor Ken Roshon conducting.  Interment will be in the Safford Cemetery.