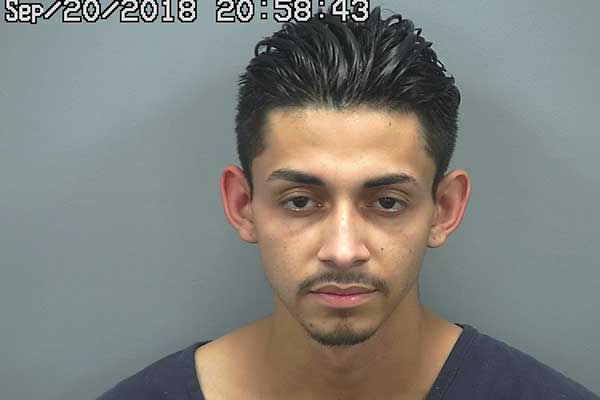 SAFFORD – Just after 8:00 am last Thursday, a couple of concerned citizens called authorities at separate times about a man seen passed out for about 20 minutes near the second entrance to Sunrise Village trailer park and that he appeared to look ill. When an officer arrived to the area, he was informed the car was parked in a vacant lot just north of a space in the trailer park. The officer parked the patrol vehicle and approached the driver who matched the description given. The driver stepped out of the car and stood on the inside of the open, driver’s side door.  When the man was asked what he was doing, he stated to the officer, he was there to visit his buddy.

The man complied when the officer asked to see his I.D. which identified him as Landon Martinez. Martinez reportedly told the officer that he wasn’t passed out, but must have been looking down at his phone and was trying to call his friend. When he was asked about reports of him being seen driving around the park in circles, he stated that because he couldn’t get a hold of his friend, he went to another friend’s house in the park. The officer suspected Martinez was under the influence of heroin due to the sound of his voice, and his physical appearance. According to the police report, Martinez’s voice was raspy and at times he would speak very quiet and low. He was very thin and his eyes were sunken with dark rings around the bottom.

When the officer asked Martinez if he was on any prescription medication, he said, “no.” He said that he had had a long night. When asked, Martinez admitted to the officer that he used heroin, “back in the day,”  but he didn’t use it anymore. Martinez reported to the officer that he didn’t have anything illegal on him or in his car. The officer asked to see the inside of Martinez’s arms, where visible track marks could be seen, left by needle injections. After being asked, Martinez hesitantly pulled items from his pocket. Martinez told the officer that he didn’t want to do any sobriety tests because he felt that the whole thing was a big misunderstanding. The officer told Martinez that he didn’t have to take a field sobriety test because he knew he was on heroin. Martinez apologized, stating he doesn’t like to do it, but that it is not easy to get off of and he’s been going through a hard time.  Martinez then admitted to using heroin the night before. He reported that the only illegal thing in the car was a syringe.

When the officer went to search Martinez, his body language changed and he began to speak quickly as his body muscles tensed up and he attempted to turn to face the officer. The officer told him to relax as he was being handcuffed, because he was being detained. Martinez then reported that he might have a little heroin in his pocket. The officer located a container with about 2 grams of heroin. The officer walked Martinez over to their patrol vehicle and placed him in the back seat. The officer unlocked the windows so they could roll it down and speak with Martinez without having to open the door. The officer told Martinez that he was going to be transported to the police station for further investigation and he could possibly be released.

Other units were called to the area in search for Martinez. Foot tracks were located cutting through several properties and alleys. Tracking hounds were requested to be brought in from the Department of Corrections. After searching for about 2 hours, Martinez was located upside down in the trash can and was taken into custody. An ambulance was called to check on Martinez, due to him complaining of cramps and numbness to his left side. Even after he was cleared, Martinez claimed he couldn’t walk and had to be helped to the patrol vehicle.

When Martinez arrived at the police station, he stated he was scared and didn’t think he would really be released after the investigation and that he just freaked out. Martinez explained to authorities that he was able to get his handcuffs in front of his body when the officer was searching his vehicle. Martinez stated he was looking for the door handle, but it was covered by the bars on the window. While he was trying to use the door handle , the bottom of the handcuffs pushed the window button and he noticed the window move. Martinez was able to unlock the door and reach his hands through the window bars to open the door. Martinez reportedly told the officer that the heroin found in the vehicle was not his and that it must be a friend’s, but could not give a name. Martinez apologized for running. When the officer searched his wallet at the station, some methamphetamine was found, and Martinez stated it was his and that he just recently began using meth.