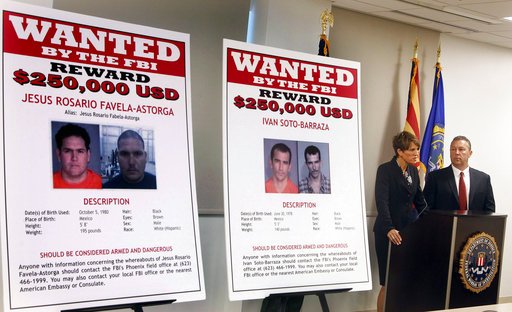 FILE - In this July 9, 2012, file photo, with wanted posters off to the side, Laura E. Duffy, United States Attorney Southern District of California, and FBI Special Agent in Charge, James L. Turgal, Jr., right, announce the indictments on five suspects involved in the death of U.S. Border Patrol agent Brian Terry in Tucson, Ariz. Mexican authorities have arrested the suspected shooter in the 2010 killing of Terry, whose death exposed a bungled gun-tracking operation by the federal government. In a joint statement issued by Mexico's navy and its federal Attorney General's Office on Thursday, April 13, in Mexico City that the suspect who's name wasn't released in Terry's death was arrested near the border between the states of Sinoloa and Chihuahua, a mountainous region note drug activity. (AP Photo/Ross D. Franklin, File)

PHOENIX (AP) — A Mexican fugitive accused of pulling the trigger to kill a U.S. Border Patrol agent was captured more than six years after a slaying that exposed a bungled gun-tracking operation by the federal government.

Mexican authorities arrested Heraclio Osorio-Arellanes on Wednesday as the U.S. government has pushed hard to prosecute the suspected marijuana bandits involved in the 2010 death of 40-year-old Brian Terry.

His December 2010 killing uncovered the Fast and Furious operation, in which agents from the U.S. Bureau of Alcohol, Tobacco, Firearms and Explosives allowed criminals to buy guns with the intention of tracking them to criminal organizations.

But the agency lost most of the guns, including two that were found at scene of Terry’s death. The operation set off a political backlash for the Obama administration and led Terry’s family to sue.

“Our concern over the last six years is that the individuals responsible for Brian’s murder might not all be brought to justice,” said Robert Heyer, Terry’s cousin and the family spokesman. “We were very, very encouraged with the arrest of this latest fugitive that justice continues and that cooperation between the United States and the Mexican government continues with respect to the law enforcement initiatives.”

Mexican marines took Osorio-Arellanes into custody near the border between the states of Sinaloa and Chihuahua — a mountainous region noted for drug activity, according to a joint statement Thursday from Mexico’s navy and its federal attorney general’s office. He was being held pending extradition proceedings.

Department of Homeland Security Secretary John Kelly said he was thankful to Mexican authorities and that he hopes the latest arrest will “mark a significant step” in bringing closure to Terry’s family.

“This latest arrest illustrates the commitment of the administration to seek justice for the brave law enforcement personnel who risk their lives every day to protect the border,” Kelly said in a statement Thursday.

Osorio-Arellanes faces nine charges including first-degree and second-degree murder and assault on a federal officer, among others. He was indicted shortly after Terry’s death.

Terry was part of a four-man team in an elite Border Patrol unit staking out the southern Arizona desert on a mission to find “rip-off” crew members who rob drug smugglers. They encountered a group and identified themselves as police in trying to arrest them.

The men refused to stop, prompting an agent to fire non-lethal bean bags at them. They responded by firing from AK-47-type assault rifles. Terry was struck in the back and died shortly afterward.

The government had offered a $250,000 reward for Osorio-Arellanes.

A jury in Tucson in October 2015 found two men, Jesus Leonel Sanchez-Meza and Ivan Soto-Barraza, guilty of murder and other charges.

Another, Manual Osorio-Arellanes, pleaded guilty to murder and was sentenced to 30 years in prison in 2014. It’s unclear if he’s related to the suspect arrested this week.

Rosario Rafael Burboa-Alvarez has pleaded guilty to murder. He was not present during the shooting but is accused of assembling the rip crew. Jesus Rosario Favela-Astorga remains at large.

All of the defendants have been tried in Tucson by federal prosecutors from San Diego, which also will be the case for the latest suspect.

Fox News was first to report the arrest.